Discover many of the reasons why we #LoveHollywood on our self-guided walking tour!

The Hollywood Roosevelt has always been a celebrity hangout, hosting the first Academy Awards in 1929.  The hotel was tied to Hollywood icons before it was even built!  It was financed by a group that included Louis B. Mayer, Mary Pickford, Douglas Fairbanks, Buster Keaton, and Sid Grauman,  Grauman was the showman responsible for 2 of Hollywood’s most glamorous theatres, the Egyptian and the Chinese, which serve as venues for the TCM Film Festival.  It was built in 1926 at a cost of $2.5 million, and was named after the 26th president of the United States, Theodore Roosevelt. It opened on May 15, 1927. The architecture is Spanish Colonial Revival Style.

Created by showman Sid Grauman, the main draw to the Chinese theater is the Forecourt of Stars.  There you can see the famed hand and footprints of stars from the dawn of cinema to the present day.  There are multiple stories as to how the tradition of immortalizing film stars with cemented hand and footprints started.  Regardless of how it came to be, April 15th, 1927 was the date of the first official hand and footprint ceremony at the Chinese Theater, and the celebrities celebrated were Mary Pickford, Norma Talmadge, Douglas Fairbanks.

As you explore the forecourt here are some fun things to look for:

The Chinese has been the site of countless premieres, most notably Hell’s Angels, which set the standard for huge spectacle premieres, and film that made Hollywood take notice of a new star on the rise named Jean Harlow.  Over ninety years later, it is still one of most sought-after theaters by Hollywood studios for their film premieres.

On most days the theatre offers 30 minute tours for a small fee that allow you to see the indoors of this glorious movie palace. 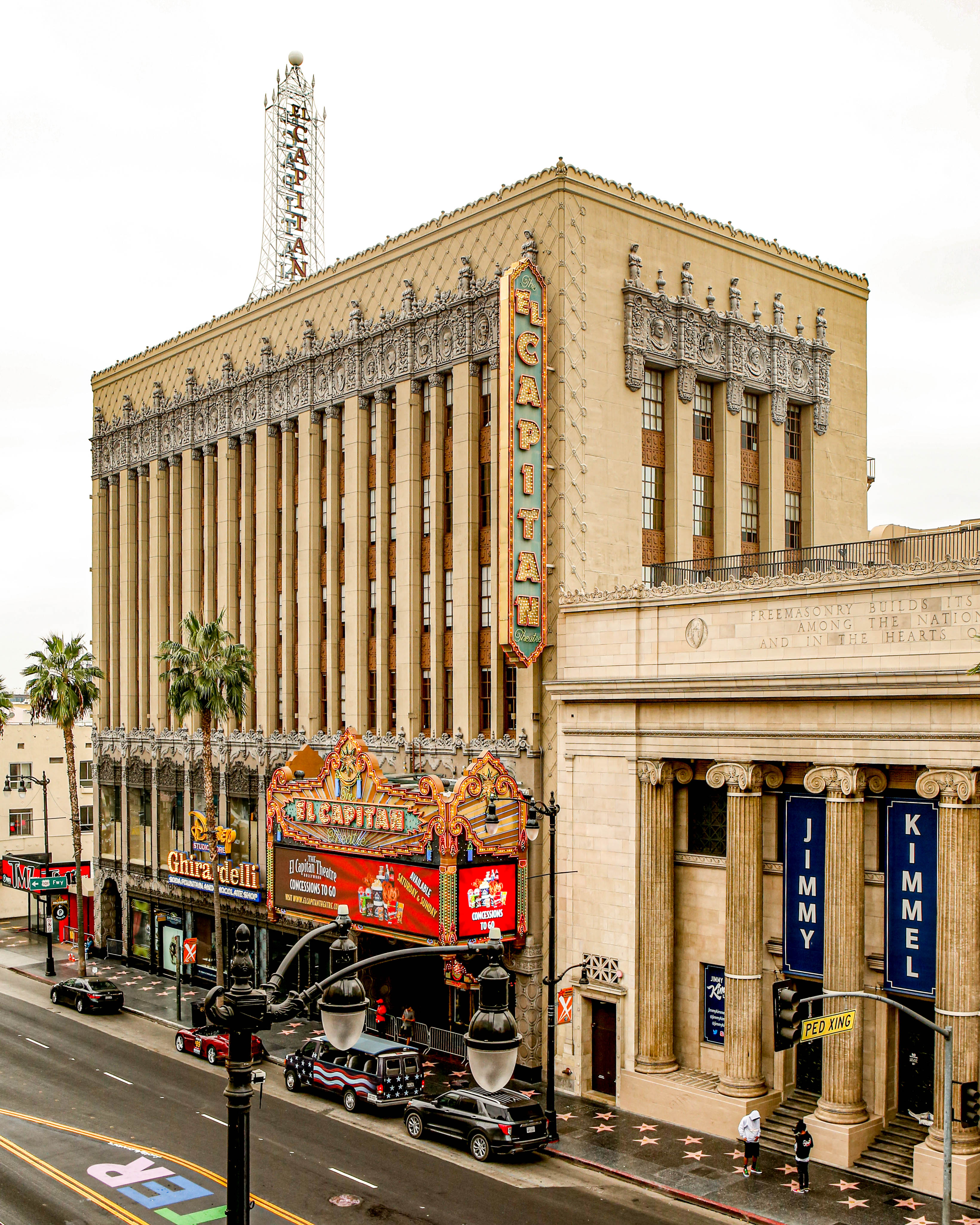 Built in 1926, the El Capitan Theatre was originally a legit playhouse.  In 1941 it screened Orson Welles’ controversial film Citizen Kane, and became a permanent movie theatre in 1942.  Today owned by Disney, it is the perfect place to see a film, classic Hollywood style.  The breathtaking Spanish Colonial architecture is complemented by an interior restored to reveal many of the 1926 features covered during the 1942 renovation.  Traditional themed pre-movie entertainment on the El Capitan’s historic stage, organ performances, sing-a-longs, and classic cartoon screening before films give the modern day audience a peek into what the film experience was like for an audience during the Golden Age of Hollywood.

Beginning of Walk of Fame

At the northwest corner of Hollywood Boulevard and Highland Avenue, set in the terrazzo sidewalk, you’ll see the beginnings of the Walk of Fame.

“This is where it all began” Photo

The idea for the Hollywood Walk of Fame was conceived in 1953 by E. M. Stuart, who served as the volunteer president of the Hollywood Chamber of Commerce.  On August 15, 1958, the Chamber and City unveiled eight stars on Hollywood Blvd. at Highland Avenue to create excitement and to demonstrate what the Walk would look like. The eight honorees included: Olive Borden, Ronald Colman, Louise Fazenda, Preston Foster, Burt Lancaster, Edward Sedgwick, Ernest Torrence, and Joanne Woodward.  The first star to be laid in the new Walk was that of Stanley Kramer on March 28, 1960, near the intersection of Hollywood and Gower.

Approximately 24 stars ceremonies are held each year.  Spanning 1.3 miles, the Walk of Fame has plenty of room for the rising stars of today along with the stars of yesterday.

Just north of Hollywood Boulevard on Las Palmas Avenue, stands the Las Palmas Hotel.  This location was Julia Roberts’ character’s apartment in Pretty Woman, and is where the famous final scene of the movie where Richard Gere comes to “rescue her” on the fire escape was filmed. 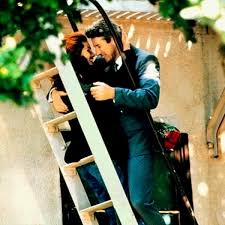 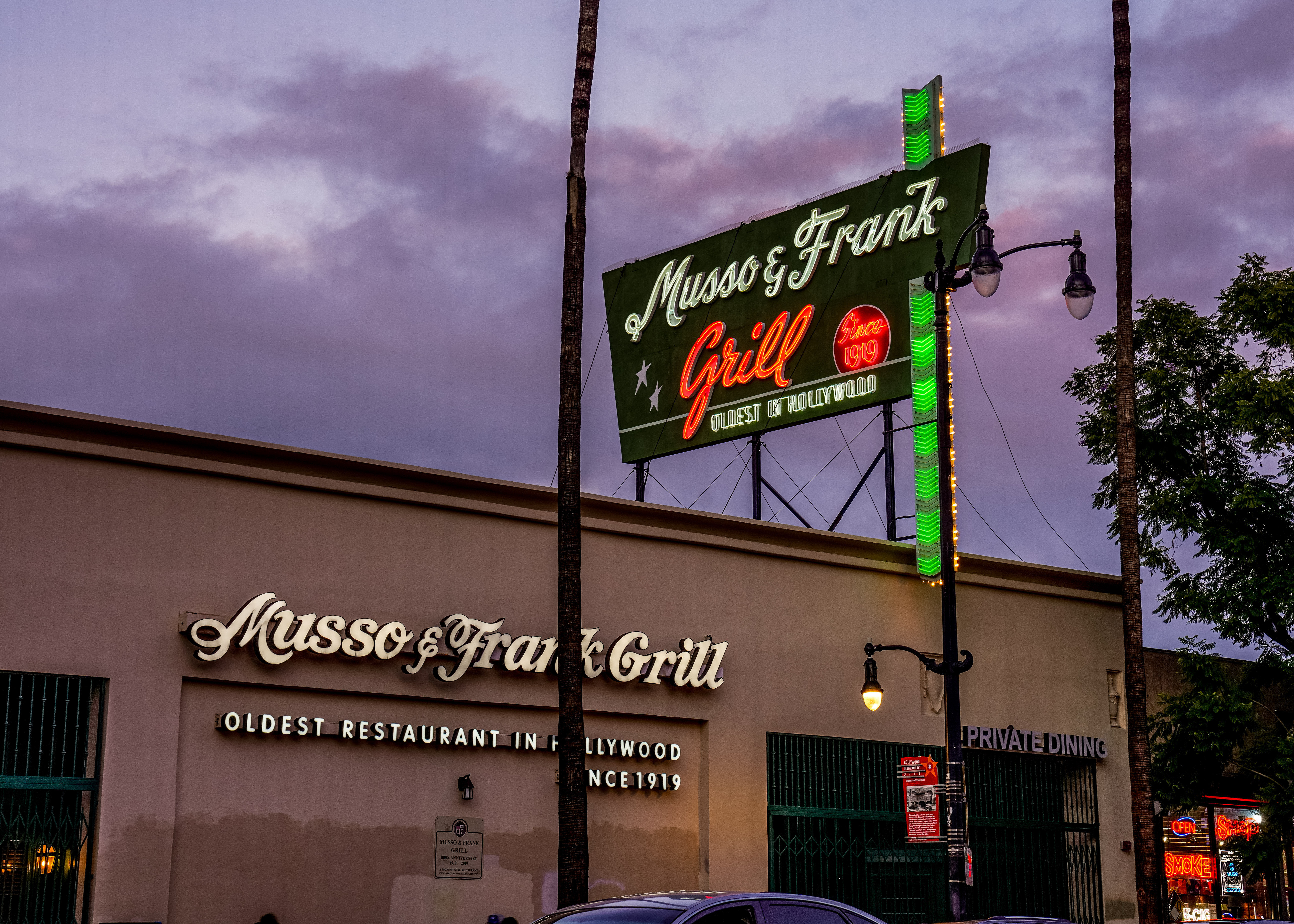 Hollywood’s oldest restaurant opened in 1919 and quickly became a popular hang-out for celebrities. Over the years everyone from Charlie Chaplin to Marilyn Monroe to the Rolling Stones have dined there.  The  restaurant had a back room and bar to accommodate writers, film celebrities, and their friends from the 1930s through 1955.  When the restaurant opened it’s New Room in 1955 furnishings, including the bar, from the back room were moved into the New Room where they remain to this day.  It’s old Hollywood vibe has made it a filming location for projects like Mad Men and Ed Wood.  Behind the restaurant you can spot a special mural done for the filming of Once Upon a Time in Hollywood.  When you stop by, don’t forget to order one of their famous martinis! 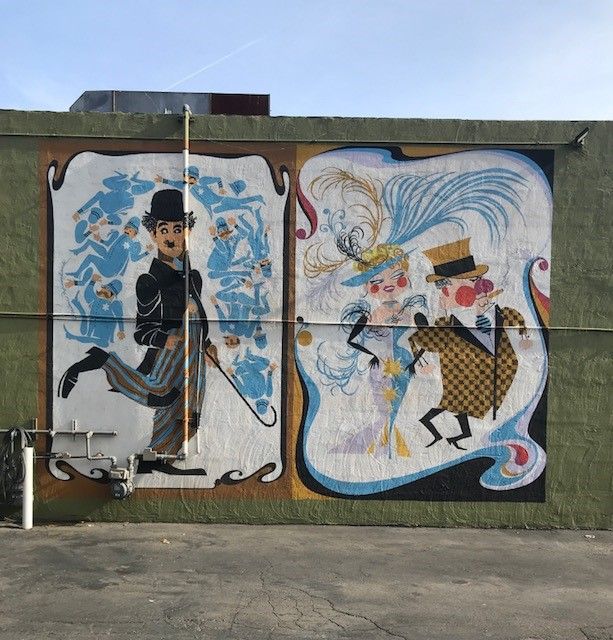 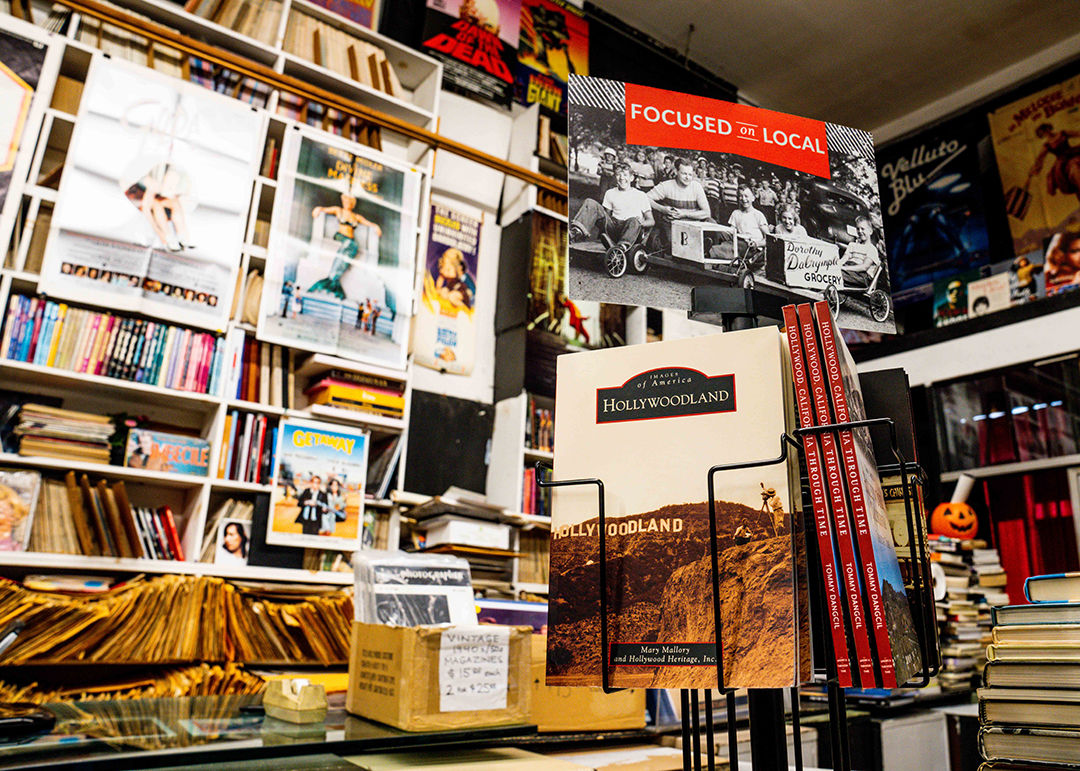 This cinema-themed bookshop is the last remaining bookshop on Hollywood Boulevard.  The shop dates back from 1938 and once catered to patrons of the Musso & Frank back room. They specialize in film history, and you’ll find everything from biographies, scripts, posters, photos, and books on film and Hollywood history.  The store even hosts events with authors and signed copies of books are usually available.

This hidden alley was a hotspot for filming during the silent era.  Silent stars Harold Lloyd, Buster Keaton and Charlie Chaplin now have their names immortalized at 1640 Cahuenga Blvd., a location used in at least 24 films from the silent era.  You can find the plaque at a gate located at 1640 Cahuenga Blvd.  When you visit be sure to check out the interesting shops and restaurants nearby. 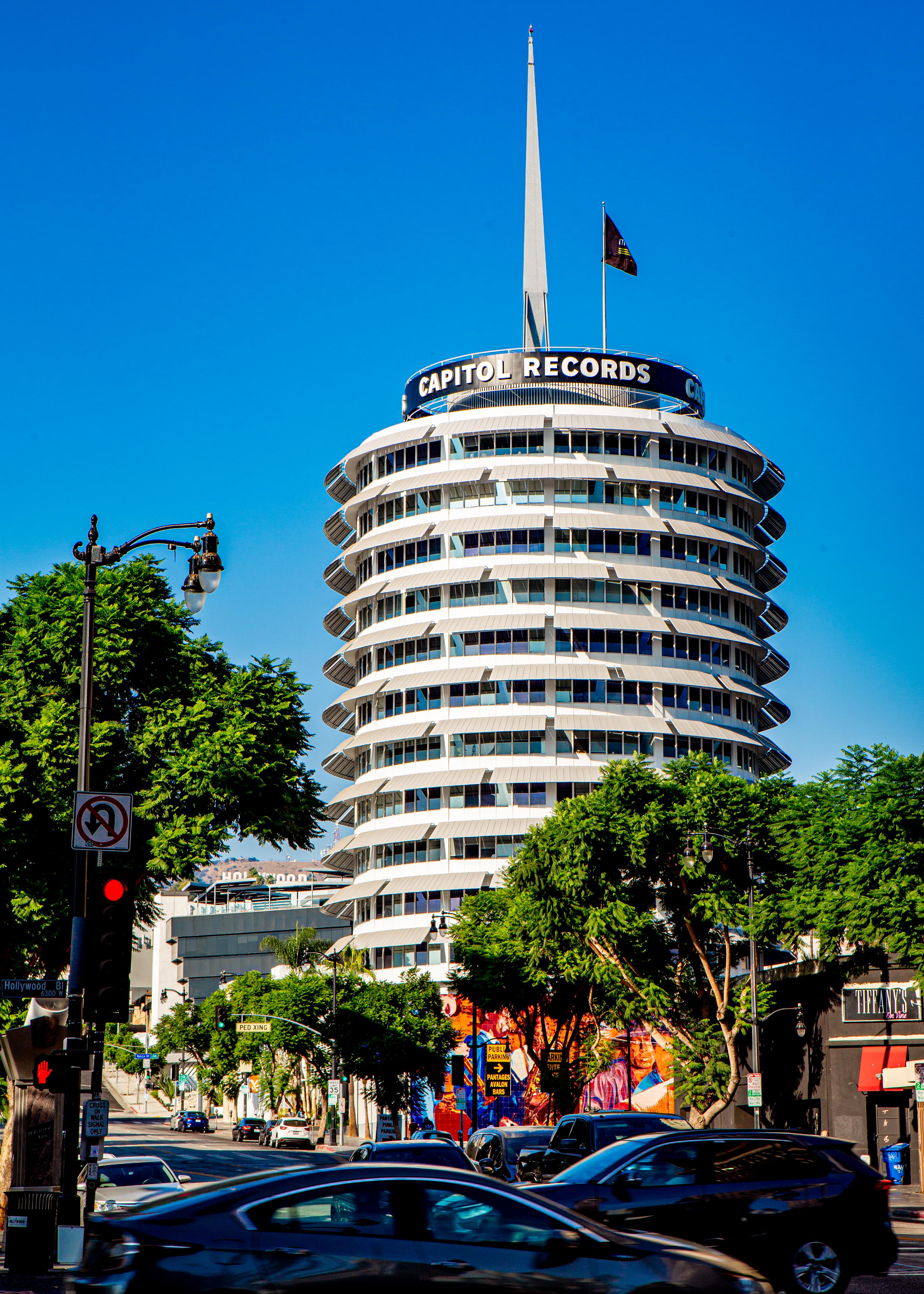 Just north of the famed intersection of Hollywood and Vine sits the iconic Capitol Records Building.  The 13-story tower was the world’s first circular office building when it was completed in April 1956.  The Capitol Records Building is the site of the historic Capitol Studios, where Frank Sinatra, The Beach Boys, Nat “King” Cole, Sir Paul McCartney, and many more music legends recorded some of the most treasured music in history.  Many of the Walk of Fame stars lining Vine Street leading up to the building are for music industry greats who recorded there. 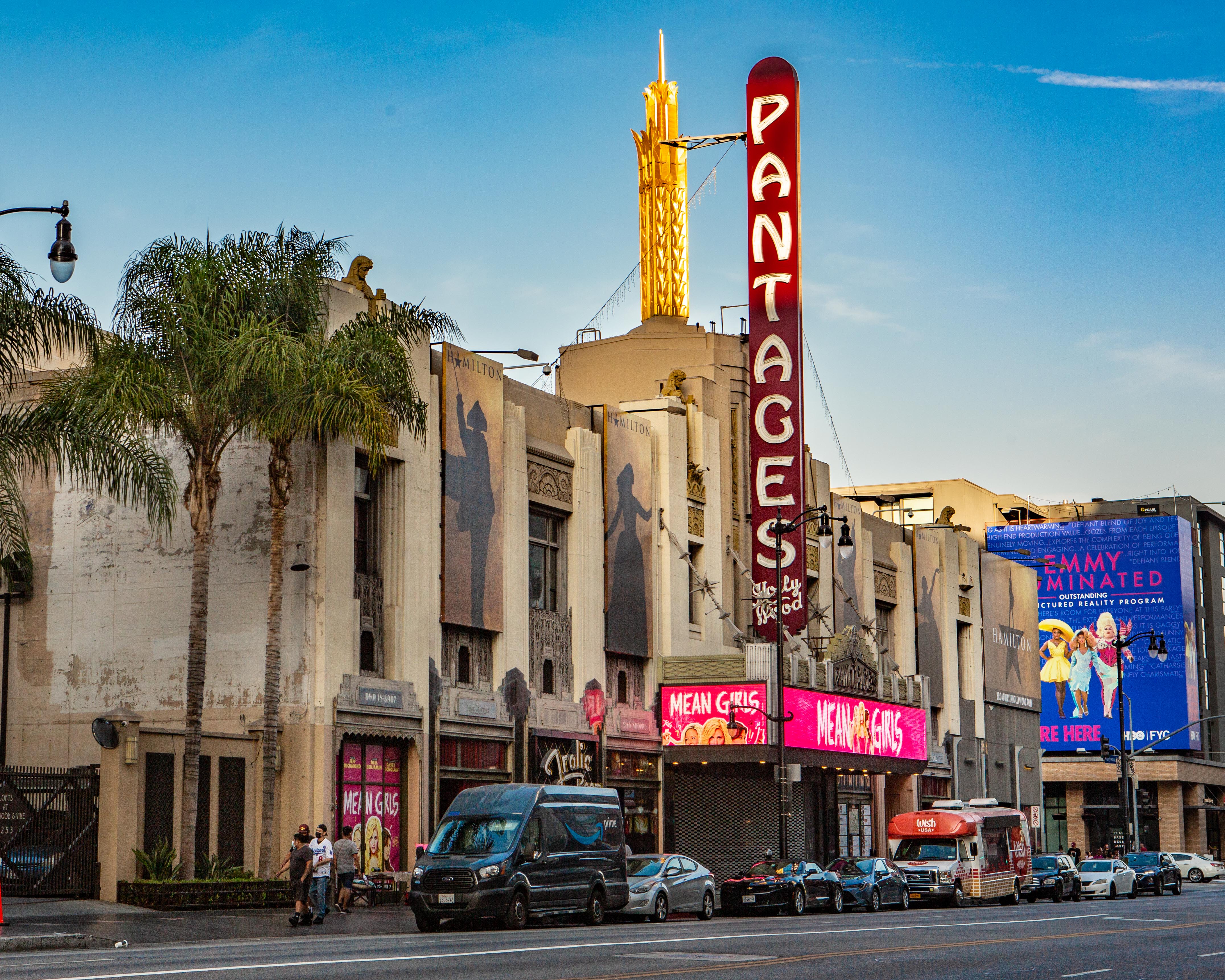 Originally designed with a mix of vaudeville and movies in mind, when the theatre was completed in 1930, it exhibited movies almost exclusively.  Mogul Howard Hughes purchased the theatre when he was running RKO Studios and had offices on the second floor.  The Pantages hosted the Academy Awards from 1950 to 1960, including the first live telecast of the Oscars on March 19th, 1953.  In 1977 it was converted into a legit theatre and now hosts touring companies of Broadway shows.  The Pantages theatre is indeed a glamorous place to spend an evening, with a fabulous art deco interior including an elegant starburst chandelier suspended above a blue backlit upper ceiling, and elaborate plaster relief panels depicting the leading industries of the 1930s such as agriculture, oil, gold, lumber, movies and the arts, sports and real estate.