People passing by the intersection of Hollywood Boulevard and Wilcox Avenue may notice that construction of a new 7-Eleven store is nearly complete. The plastic “coming soon” banner that adorned the storefront for many months has been replaced with permanent signage. Although not historic, the single-story building on the south-west corner has an interesting past and has undergone significant adaptations to meet the needs of the new tenant.

The previous tenant of 6500 Hollywood Boulevard was Lady Studio Exotic Shoes, which offered a wide range of handmade and specialty-brand platform shoes and boots for over 35 years. The store was popular with the public and the entertainment industry because it carried all kinds of fashionable footwear and clothing. 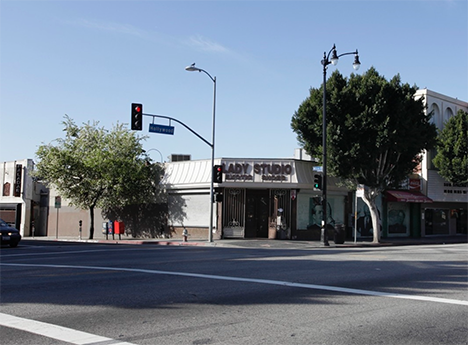 After the shoe store closed, the space reverted to the owner. There was an offer from a restaurant tenant. The restaurant was in the planning stage for a year, but it did not materialize. NAI Capital, a commercial real estate brokerage firm, handles marketing and leasing for the property. Marty Shelton, Vice President of the firm’s Urban Development Group, identified 7-Eleven as a tenant. “Before the pandemic, 7-Eleven was looking for retail space on Hollywood Boulevard,” he said. “7-Eleven was attracted to the location for the visibility and foot traffic.” The neighborhood has a Walk Score of 97, which means that daily errands do not require a car.

Still, there is plenty of off-site parking for drivers who choose to stop by the 7-Eleven. Street parking is available. There is also a parking lot behind the building, but it is owned by the city.

The new store will open in January 2021, or sooner. 7-Eleven is considered an essential business, and therefore is able to remain open amid the pandemic. People often think of 7-Eleven as a convenience store that sells snacks, drinks, ice cream, and candy, but it also offers basic household essentials and groceries such as bread, eggs, milk, pet food, and soap. The 7-Eleven website offers 7NOW delivery so that customers can get their favorite items delivered any time of day in about 30 minutes. 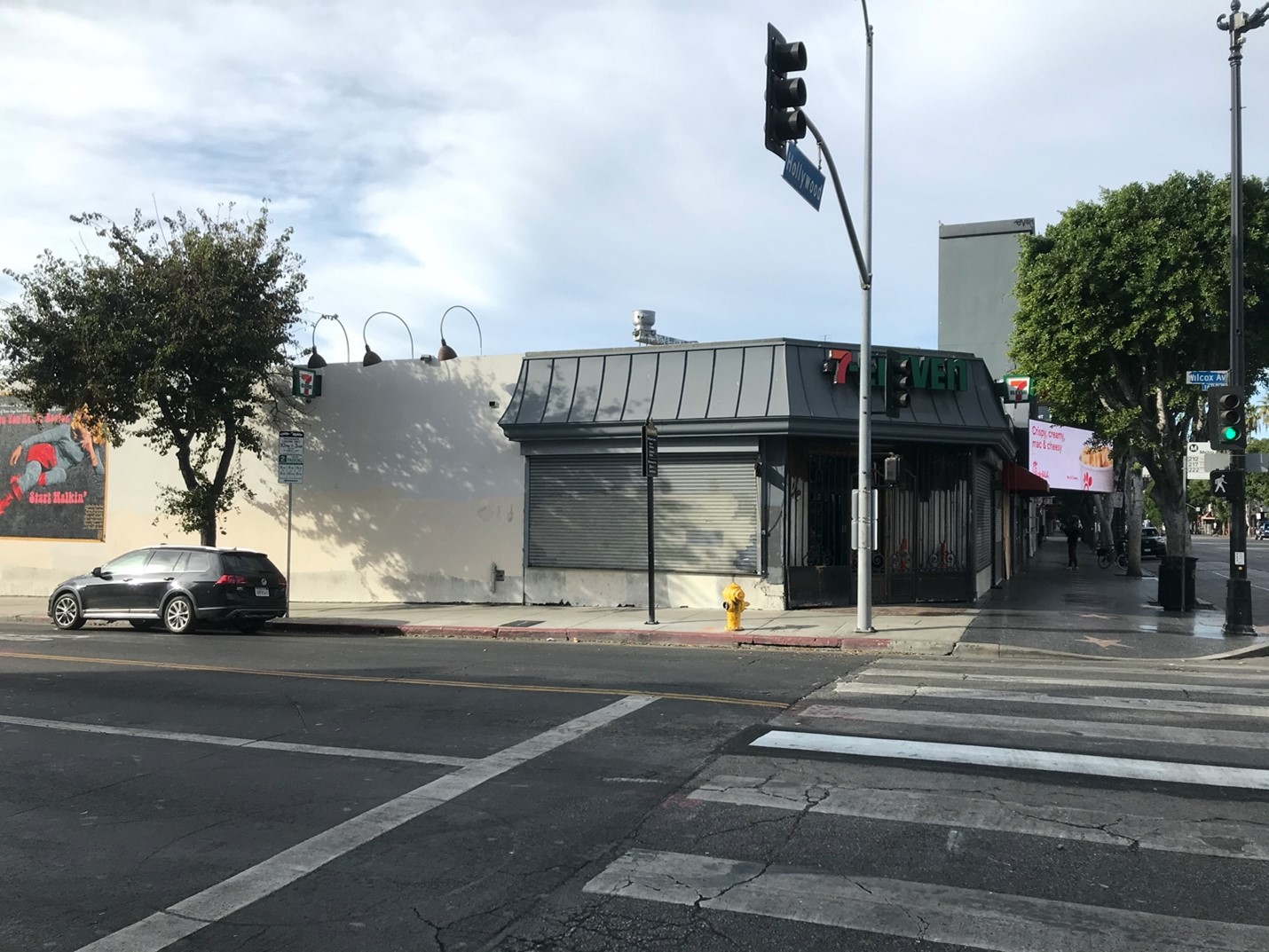 The new 7-Eleven is located on the south-west corner of Hollywood Boulevard and Wilcox Avenue. (Photo courtesy of Steven Herrera)

The new 7-Eleven is a corporate store. According to Shelton, “Corporate was looking to check all of the boxes they wanted to make the decision, including the corner location, size, and foot traffic on Hollywood Boulevard.” The space is 2,400 square feet, which is the typical size of a corporate store.

There is another 7-Eleven only three blocks away on Hollywood Boulevard near Las Palmas Avenue—which opened in 2019—but it is a franchise store. Franchise locations tend to be smaller than corporate stores, and not located on corners. The franchisee of the 7-Eleven near Las Palmas will be managing the new store, and therefore brings relevant experience.

Another important feature of the new 7-Eleven is that it is a “dry” store, meaning that it cannot sell alcohol. Normally, a 7-Eleven store can apply to sell alcohol once a certain amount of time has passed after the start of the lease. But NAI Capital took that provision out of the lease. Shelton said “That was done purposefully to be respectful of the community.” The contract also states that 7-Eleven will provide its own security, if needed.

The agreement was signed in May 2018 for a 10-year lease. 7-Eleven had to get a Conditional Use Permit (CUP) from the city in order to be open 24 hours. Without a CUP, a business can only be open from 7am to 11pm. It took six months to obtain the CUP. As Shelton pointed out, “That is a contingency. Without that, there is no deal.” 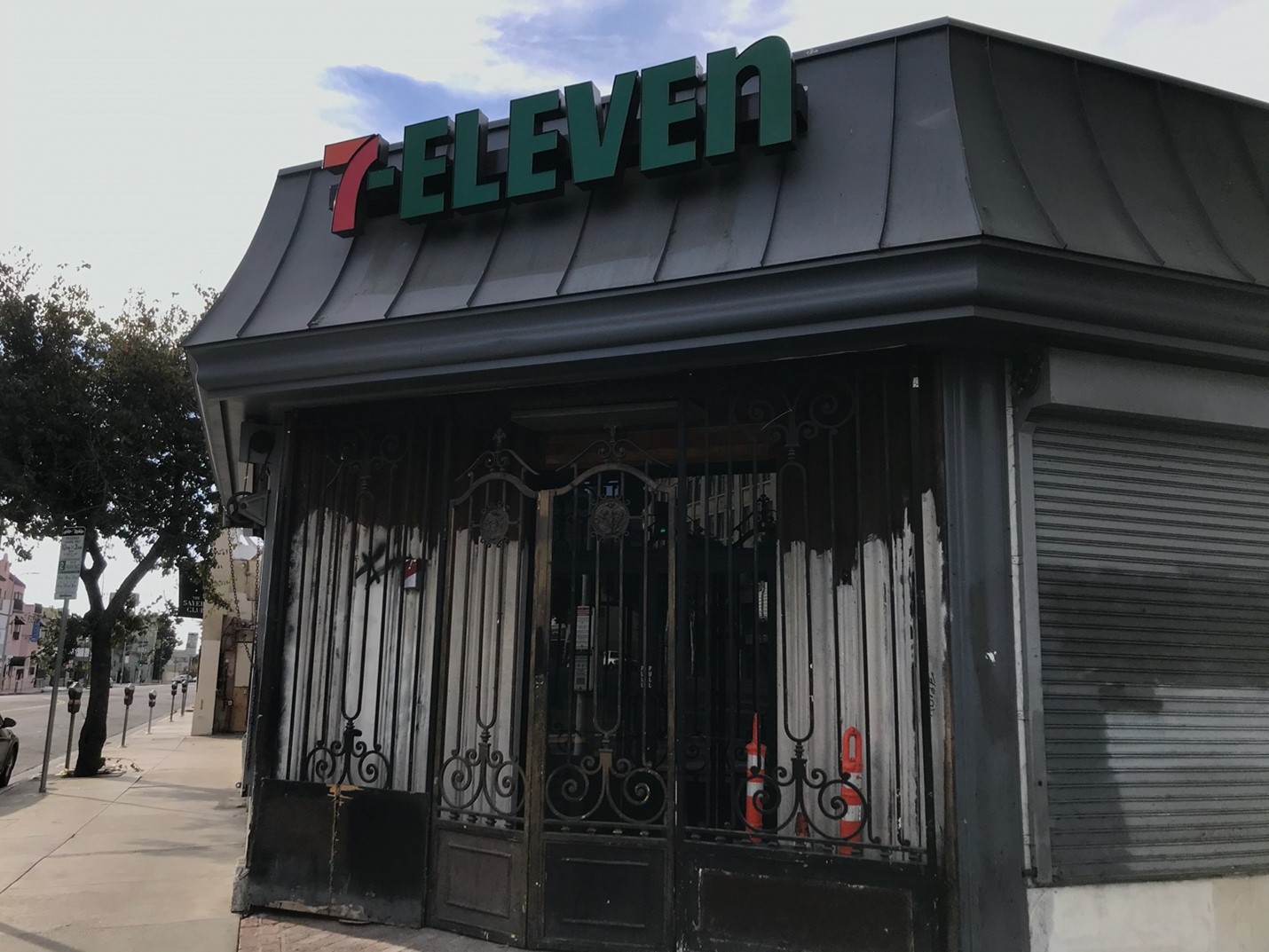 The old building has a lot of character and sets the new store apart from other 7-Eleven locations. (Photo courtesy of Steven Herrera)

After the CUP was issued, the attention turned to 7-Eleven’s requirements for the space in terms of infrastructure. This included HVAC, plumbing, and electrical. Since the needs of 7-Eleven were much different than those of the shoe store, the owner had to have work done on the building before turning over the keys to the new tenant.

The plumbing work was relatively minor, but the electrical infrastructure needed significant upgrades to support the power requirements. It took months for the work to be completed, but the building got sign off on power in August 2020.

Once the owner’s work was done, the space was turned over to 7-Eleven. The new tenant’s work involved building the storefront and installing a new HVAC system on the roof. Installation of new flooring and fixtures was also part of the buildup.

The old building has a lot of character and sets the new store apart from other 7-Eleven locations. There were a lot of moving parts involved in converting this retail space from a shoe store to a 7-Eleven. But the result will be rewarding as the new store will contribute to the diversity of the Hollywood landscape, and provide a much-needed source of groceries for residents.