An Exciting New Era for the Historic Vogue Theatre

People passing by the Vogue Theatre (6675 Hollywood Boulevard) may notice that changes have been made to the façade. There is signage announcing the future opening of the Vogue Multicultural Museum (VMMLA). The historic, two-story building on the north side of Hollywood Boulevard between Las Palmas Avenue and Cherokee Avenue has an interesting past and has undergone significant adaptations to meet the needs of the new tenant.

The Vogue Theatre is on the world-famous Walk of Fame, close to Musso and Frank Grill, Hollywood’s oldest restaurant. A few blocks west of the theatre is the Hollywood and Highland shopping center, popular with tourists and locals alike.The theatre opened in 1935 with a double feature of “The Phantom Fiend” and “Ladies Crave Excitement.” It had a seating capacity of 897; there was no balcony. The Vogue was operated by Fox West Coast Theatres for many years, and was given a complete remodel in 1959. Mann Theatres took over in the early 1990s, and the Vogue closed as a regularly operating movie theatre in 1995. 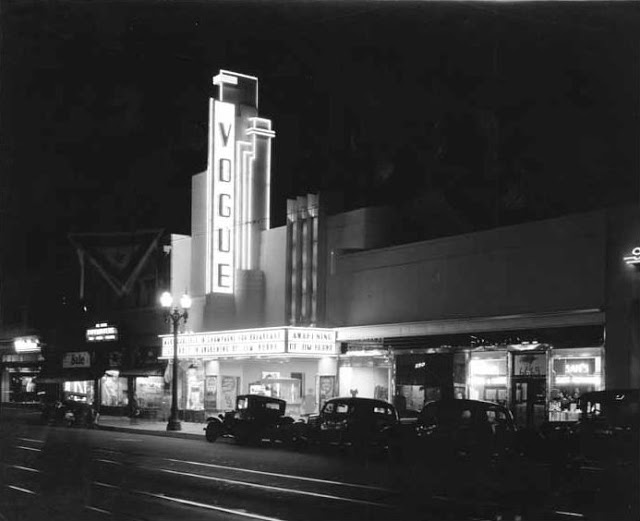 The Vogue Theatre in 1935, the year it opened. (Photo courtesy of the California State Library)

Fast forward to 2010 when the building reopened as a nightclub, restaurant, and live performance space called Supperclub. A significant amount of renovation work was done to the interior, including installation of a dance floor over the original cascading floor. Supperclub closed in 2015.

The theatre opened again in 2018, this time as Screenbid, a museum of film and television props—most of which were available for purchase. Renovation work included installation of a wall across the auditorium, which divided the space in half. Screenbid needed to expand and moved out in 2019.

In 2020, the property was represented by Avison Young, a commercial real estate brokerage firm. Charlie Schulman, an associate of Avison Young, assisted with marketing and leasing for the property. Ultimately, the VMMLA took over the space.The agreement was signed in November 2019 for a 3-year lease. The VMMLA had to get a Conditional Use Permit (CUP) from the city in order to operate as a museum, as the property had previously been used as a retail space. Since the needs of the VMMLA were different than those of Screenbid, the owner had to have work done on the building before turning over the keys to the new tenant. This involved clearing out furnishings, fixtures, and equipment (FFE) from the previous tenants. It took thirty days to remove all of the buildout. 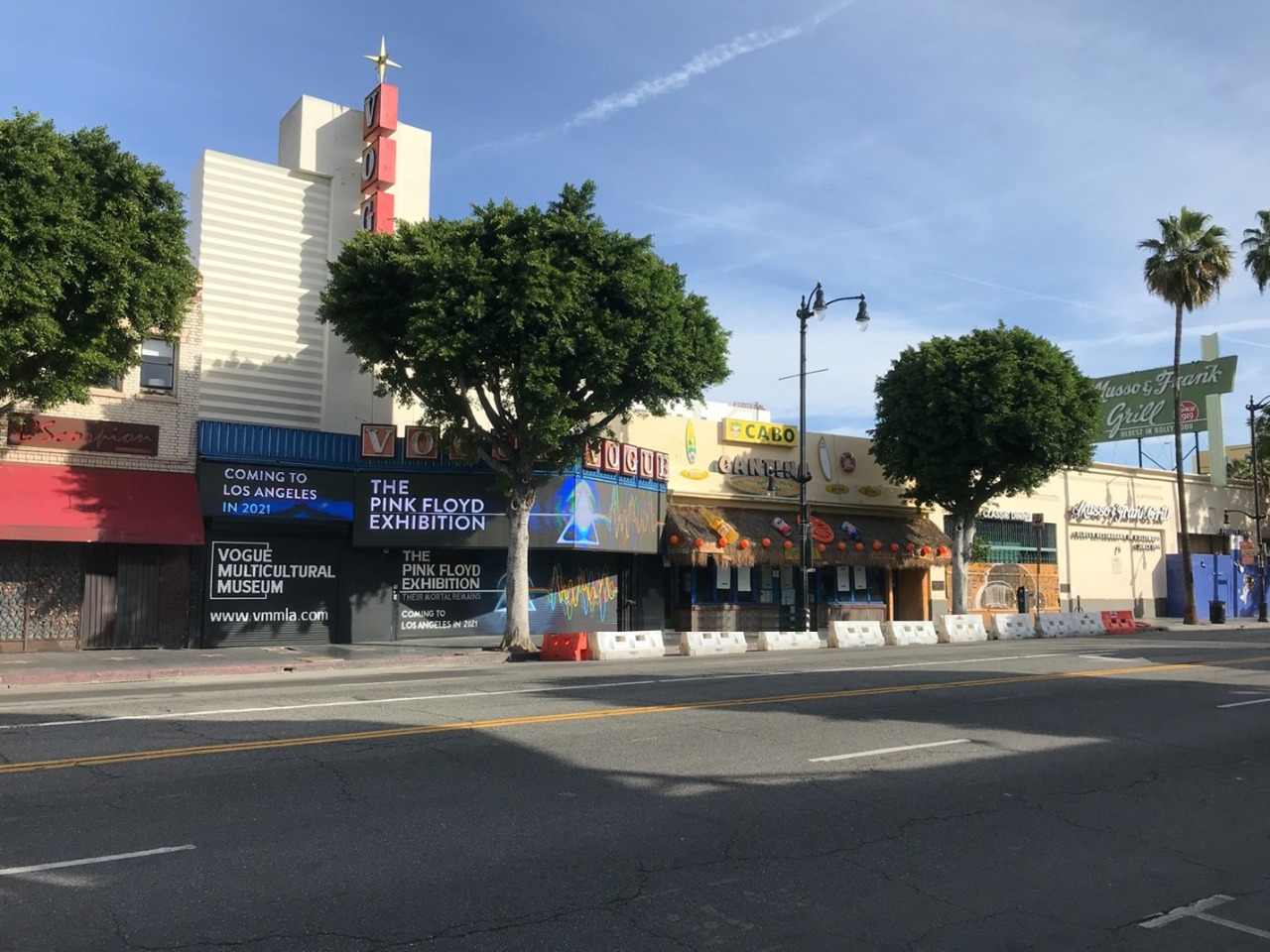 The Vogue Theatre is on Hollywood Boulevard between Las Palmas Avenue and Cherokee Avenue. (Photo by Steven Herrera)

According to Schulman, the building's interior is perfect for a museum because it has a “clear span,” which means that there are no structural beams. The space is approximately 15,000 square feet, with a ceiling height of 27 feet. There is plenty of off-site parking for drivers who choose to stop by the museum. Street parking is available. There is also a public parking garage on Cherokee Avenue, one block north of Hollywood Boulevard.

The VMMLA plans to bring diverse cultural and artistic exhibitions to Los Angeles this summer, but as Schulman noted, the opening is “…dependent on the state of California and COVID-19 restrictions.” The first engagement to be featured at the VMMLA will be "The Pink Floyd Exhibition: Their Mortal Remains" which debuted in London in 2017. Since then, it has travelled to Italy, Germany, and Spain. Follow VMMLA on Facebook for updates related to the exhibition's opening and ticket sales. 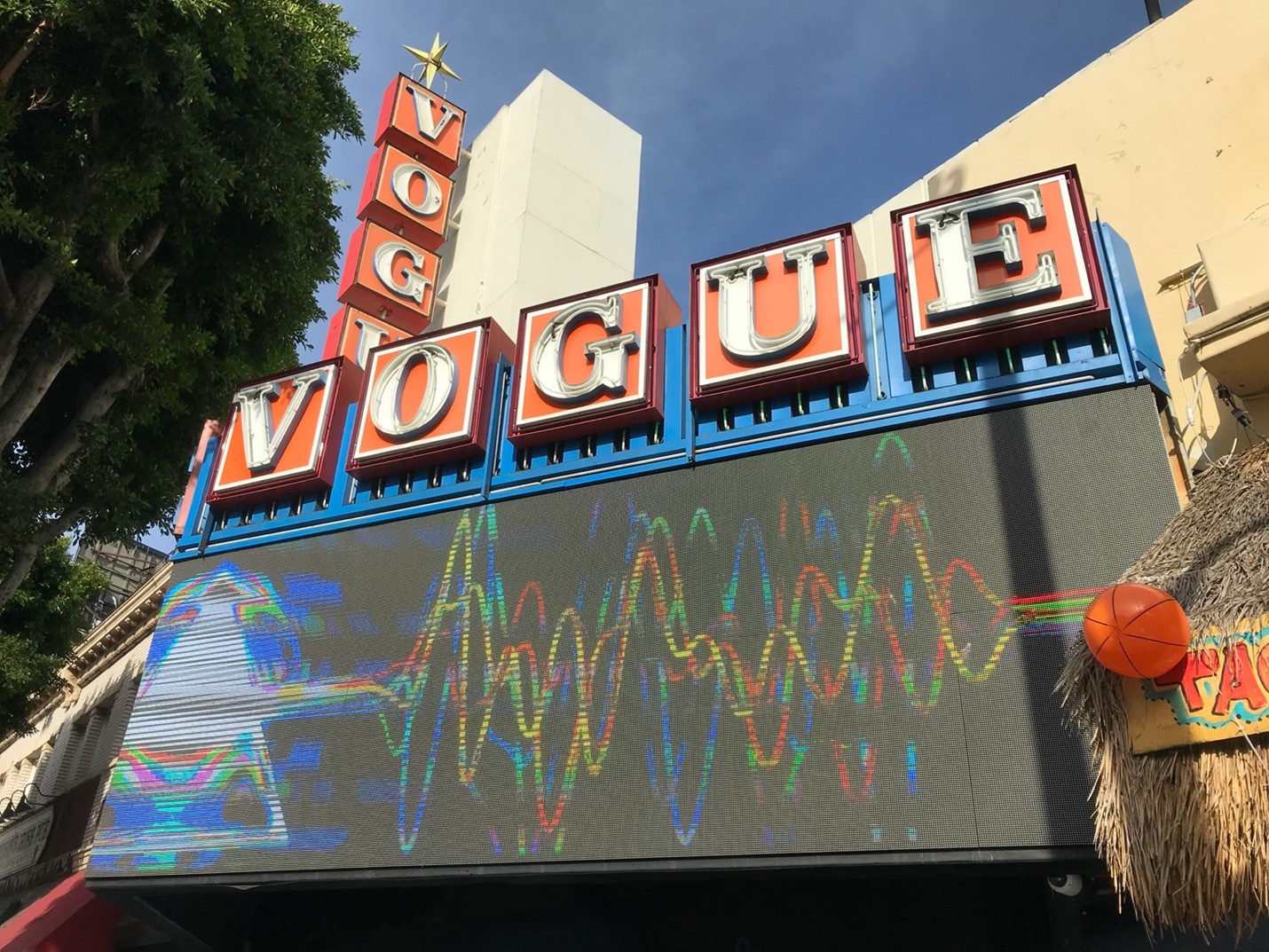 The building currently features a digital marquee for advertising. (Photo by Steven Herrera)

Many of the historic components of the theatre were preserved because the new tenant had an affinity for Old Hollywood. The components included the original staircase, the projection room on the second floor, and the curtain rollers for the screen. The oval-shaped, inset lighting fixture in the ceiling was also preserved. 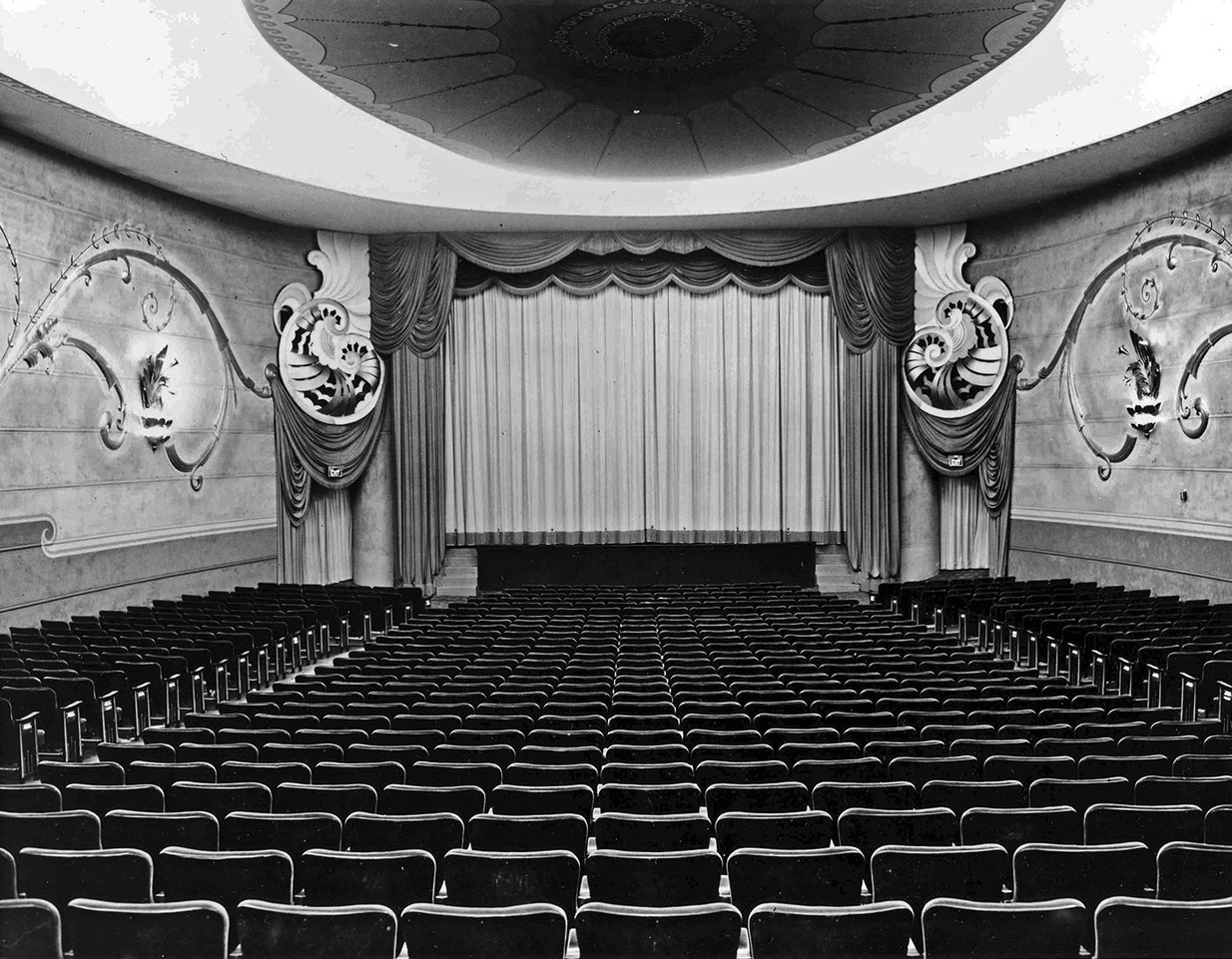 A historic photo of the theater's auditorium in 1946, following a renovation by then-owner Fox West Coast. (Photo courtesy of Western Photo Service)

The historic property has much character and will give the VMMLA a high degree of curb appeal. The theatre has experienced many transformations over the years, and this time the new tenant incorporated the Vogue name in a tip of the hat to Old Hollywood. There were a lot of moving parts involved in converting the space from a movie prop house to a pop-up museum. But the result will be rewarding as the new business will contribute to the diversity of the Hollywood landscape, and help revitalize the neighborhood once restrictions are lifted.