The Hollywood landscape is evolving as new construction projects abound. But there are many historic buildings that have stood the test of time and continue to suit the needs of modern life. Some of the structures on Hollywood Boulevard are about one hundred years old and are being renovated to preserve their history and character.

Between 1915 and 1935, Hollywood Boulevard was transformed from a residential street to a bustling commercial district of the motion picture industry. The main street of the film capital of the world contains an eclectic mix of the predominant architectural styles of the first three decades of the twentieth century. All of the following buildings are listed in a National Register of Historic Places nomination form as contributors to the significance of the district.

The Hillview Apartments is now “The Harlan Residences”

People strolling along the Walk of Fame may notice a beautiful, ornate building on the corner of Hollywood Boulevard and Hudson Avenue. The striking architectural beauty stands out among the building in the business district, and pre-dates a lot of the other structures in the neighborhood, including Musso and Frank Grill, Hollywood’s oldest restaurant.

Movie moguls Jesse Lasky, co-founder of Paramount Pictures, and his brother-in-law Samuel Goldwyn, co-founder of MGM, founded Hillview Apartments in 1917. It was one of the only apartment buildings at the time willing to rent to actors. Hillview quickly became a sought-after residence, and tenants included screen legends from the silent-era. The basement served as a rehearsal space until it was reputedly converted to a speakeasy by Rudolph Valentino and Charlie Chaplin.

The four-story apartment complex was designed by the Tifal Brothers in the Mediterranean style. The façade was distinguished by two towers, each featuring a bracketed cornice. Other details included sash windows and a red tiled roof with some classical ornamentation.

Newly renamed The Harlan Residences, the property was purchased by JCI Development, Inc. True USA, and their partners in October 2021. “We quickly understood the gravity of challenges and responsibilities associated with this building’s historical and communal significance,” said Jeff Isenstadt, President & CEO of JCI Development, Inc.; Developer and Co-Managing Partner for The Harlan Residences. “It was on that premise that we assembled the best-in-class development team to ensure the longevity and generational success for the building at 6533 Hollywood Boulevard in Hollywood, California.”

Where required, the exterior was repainted in the same soft pink color that is synonymous with the building’s history In Hollywood. The old white and green striped awnings were replaced with the same original design. Additionally, new external lighting is currently being upgraded to illuminate the facade, and the neon signage mounted on the south east corner of the building has been fully restored.

The interior communal areas were redecorated with new lighting and flooring to reflect the style of the building. The textures, colors, and materials augment the story of the buildings origin; even the original stone floors have been brought back to their original sparkle.

The building has 26 studios (375-587 sq. ft.), 13 one bed / one bath (600-720 sq. ft.), and 14 two bed / one bath (985-1,136 sq. ft.). The floor plans, which were originally named after Hollywood stars, range from “The Greta Garbo” to “The Valentino.” All 53 units have been completely upgraded with new kitchen appliances; luxury flooring; window coverings; bathroom furnishings; in-unit washers and dryers; and upgraded central air conditioning.

A renovated 2-bedroom unit; the main lobby entrance; and a 1-bedroom unit at The Harlan Residences. (Photos courtesy of Kyle Joseph Buckley)

The Hollywood Partnership has been working closely with The Harlan ownership team to reactivate the street lights mounted on poles, and accent lighting embedded in the Walk of Fame. Not to be outdone, even the entertainment offerings at The Harlan are a step above the rest; featuring multiple venues from renowned Houston Hospitality. This extraordinary property is well equipped to continue its hundred-year tradition of appealing to creative professionals and individuals who are looking to live the true Hollywood lifestyle. 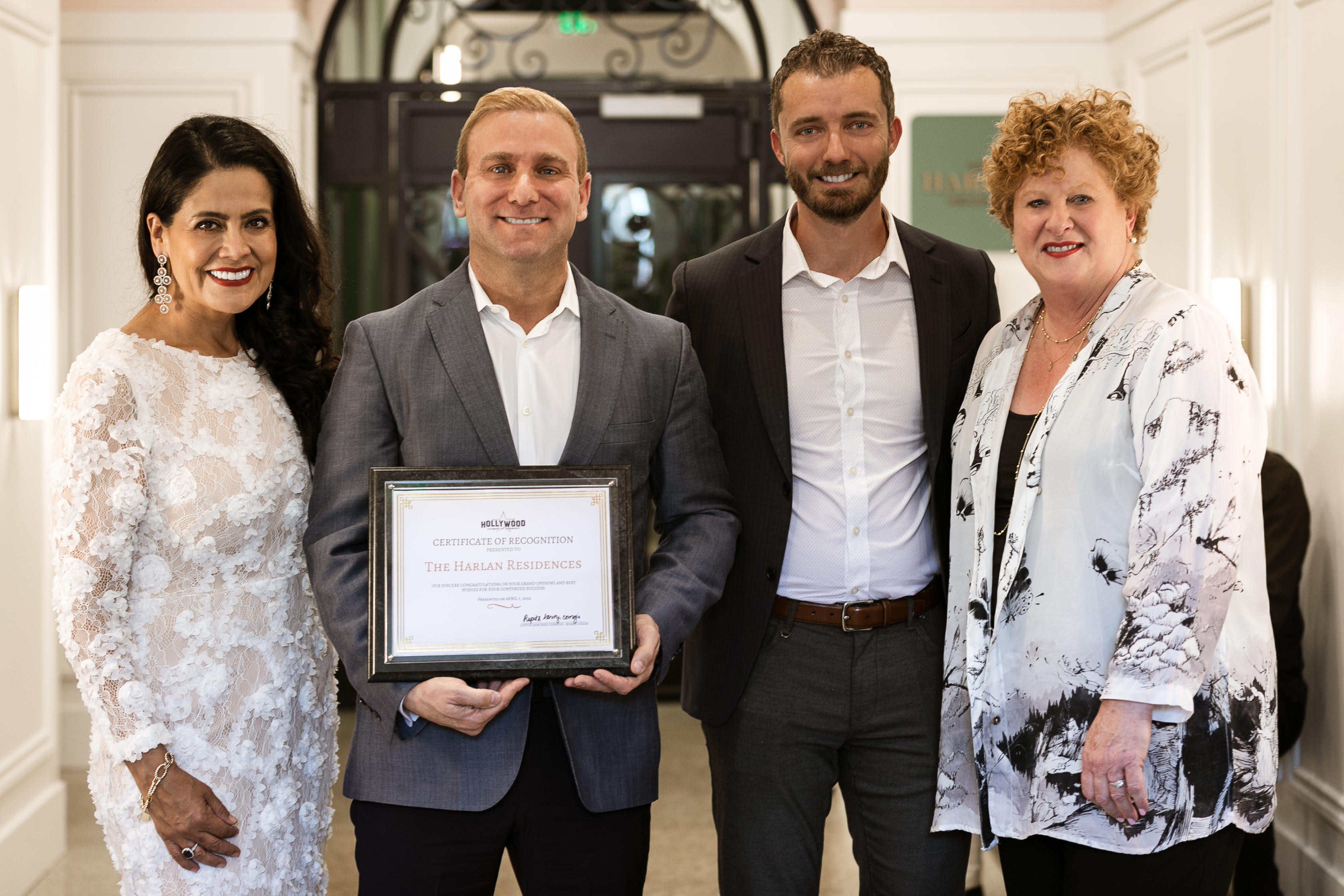 The Hollywood Studio Building is on Hollywood Boulevard, just west of Schrader Boulevard. It is on the Walk of Fame, adjacent to Hollywood Toys and Costumes. The historic building has been meticulously repainted to match the original color scheme as closely as possible.

The mixed-use structure at 6554-6566 Hollywood Boulevard was constructed in 1927. The two-story, stucco building has retail on the ground floor and office space upstairs. Many of the offices were equipped with fireplaces, which are no longer functional, but still exist.

The building was designed by Gogerty & Weyl, who were among the most famous Hollywood Boulevard architects. The Spanish Colonial Revival building has Churrigueresque ornamentation, which lends a sense of formality. The Moorish arched windows on the second story have ornamented columnettes between them. 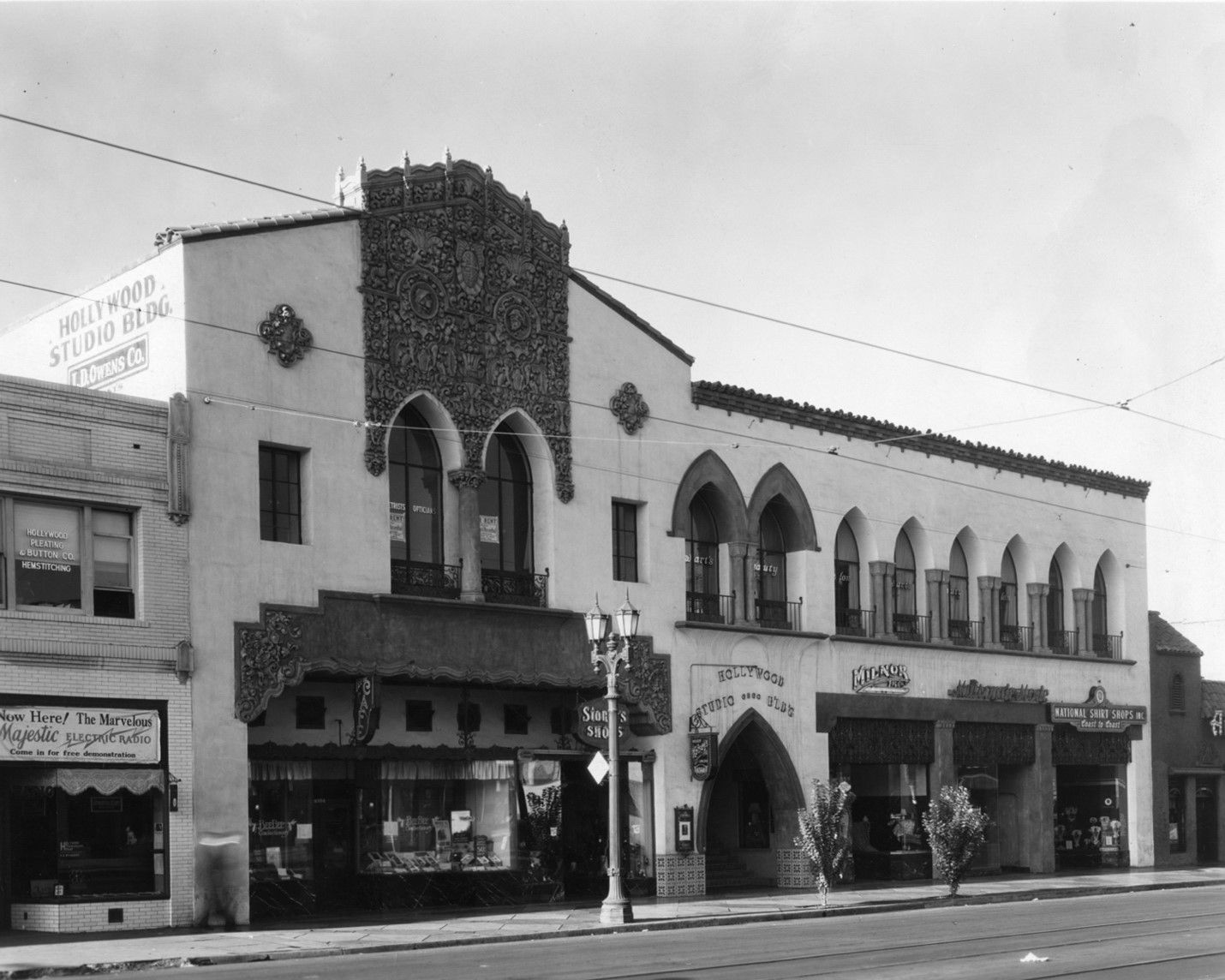 A photograph of the Hollywood Studio Building in the 1920s. (Photo courtesy of Evan Kaizer)

The Sieroty Company is the commercial real estate firm that has ownership of the property. Evan Kaizer is President and CEO of the company, and is supervising the renovation project. “We are doing this because we refuse to allow our property to become part of the degradation of Hollywood,” he said. “Our building is part of the history of Hollywood. We have controlled and managed the building for almost one hundred years, and will continue into the future.”

Over the last several years, the building was painted in colors that did not highlight its architectural beauty.  That is why, in this most recent renovation, the decision was made to go back to the historically accurate color scheme. Kaizer happens to collect old postcards of Los Angeles, and had one from the 1930s that featured a color photograph of the Hollywood Studio Building. Although Kaizer found black and white photos of the building from the 1920s, the postcard was the best reference for color, so it was used to select the paints for the renovation. 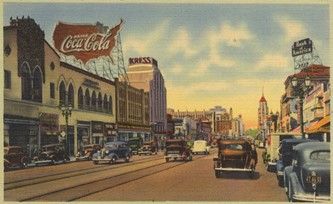 The 1930s postcard that was used as a color reference for repainting the Hollywood Studio Building. (Photo courtesy of Evan Kaizer)

The process started when Kaizer showed the postcard to Kate Hoffman, a colorist. In a matter of a few days, Hoffman visited the building and developed several color schemes as possible options. To his delight, Kaizer learned that the one he selected was the colorist’s first choice.

The main color for the body of the building is “Parish White,” which has a creamy appearance. “Rural Earth,” a brown color, is used for the friezes. The window ledges, columnettes, eyebrows, and roofline are painted “Embassy Green.” And the metal work in front of the windows is painted “Bucktrout Brown.”

Affinity Painting, a contractor with whom Sieroty has done business previously, was given the green light for the project. But starting the work was complicated as it took a few months to get a permit to put scaffolding up on the Walk of Fame.

After the permit was obtained, there was a shared sense of urgency between Sieroty and the contractor. Albert Abad efficiently lined up his crew, and completed the façade in a professional manner. The preparation and painting of the façade took about three weeks, and was completed in March 2022. Before the scaffolding was removed, Kaizer personally climbed up and inspected every inch of the façade. The renovation project also includes repainting the rear of the building.

According to Kaizer, the architecture of the building is important to not just Hollywood, but also Los Angeles, and it deserves to be showcased. “Our most recent renovation truly celebrates the building’s beautiful history,” he said. 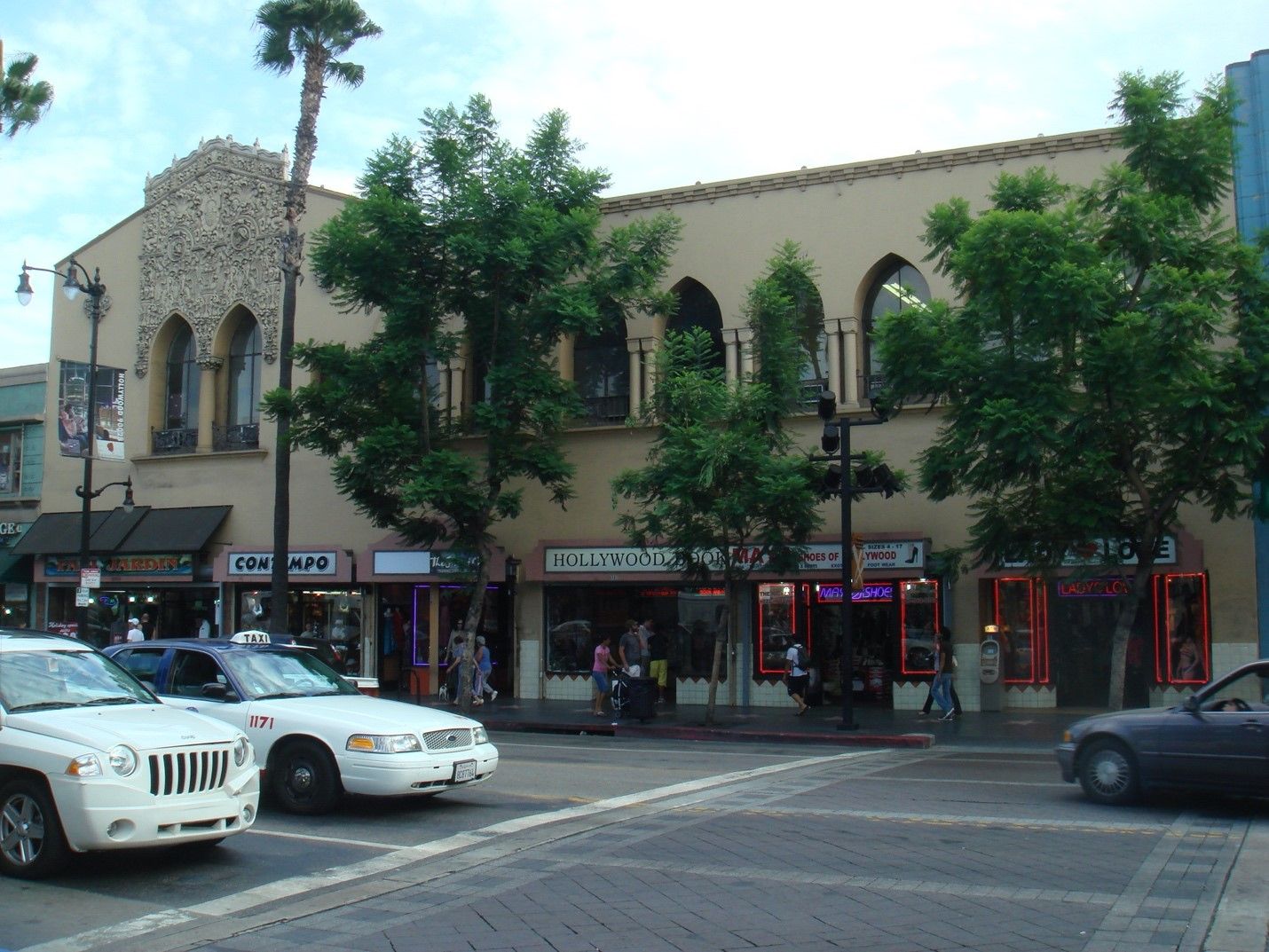 The Hollywood Studio Building façade before its most recent renovation. (Photo courtesy of Evan Kaizer) 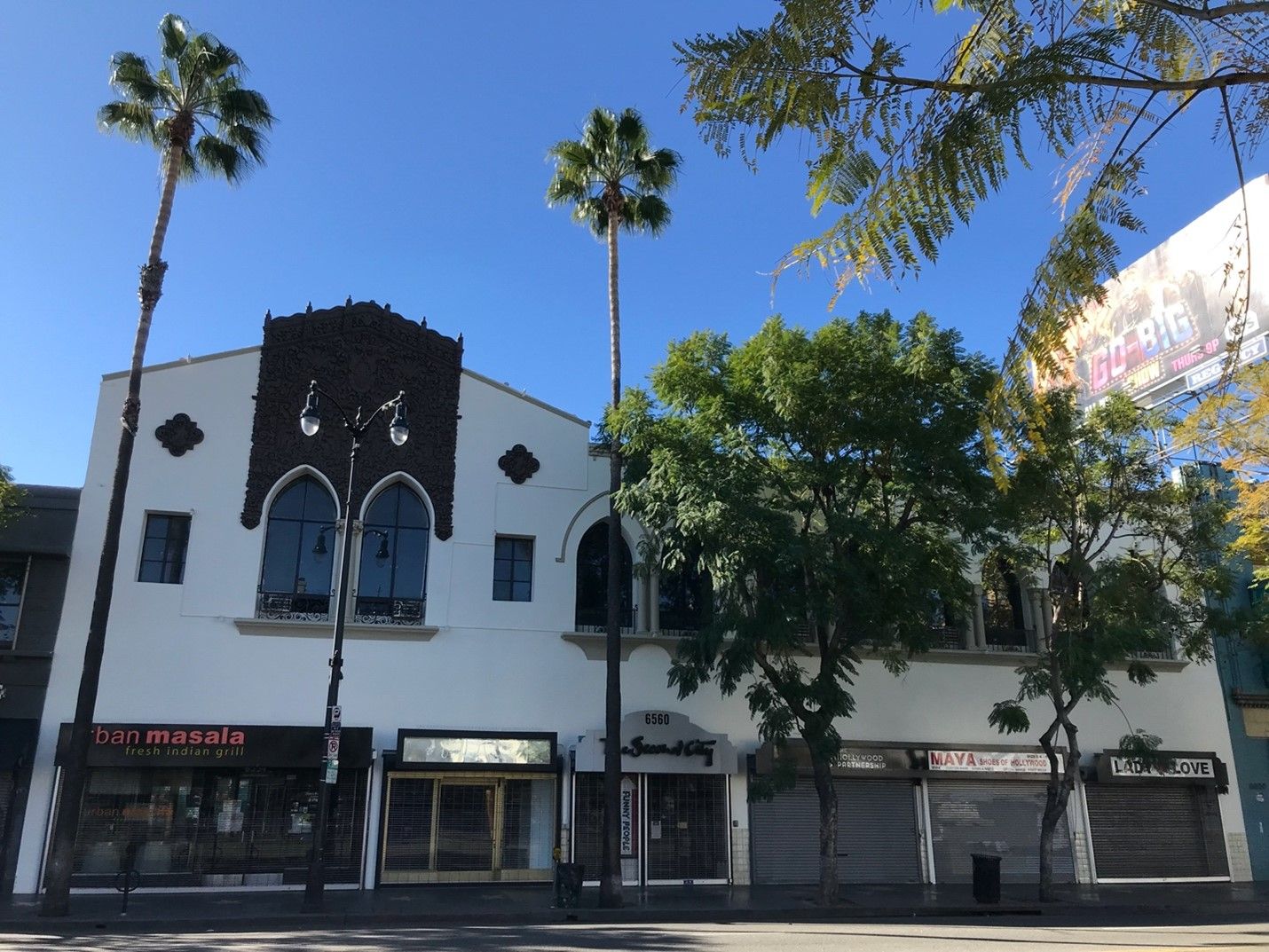 The Hollywood Studio Building façade after it was repainted in the historically accurate color scheme. (Photo by Steven Herrera) 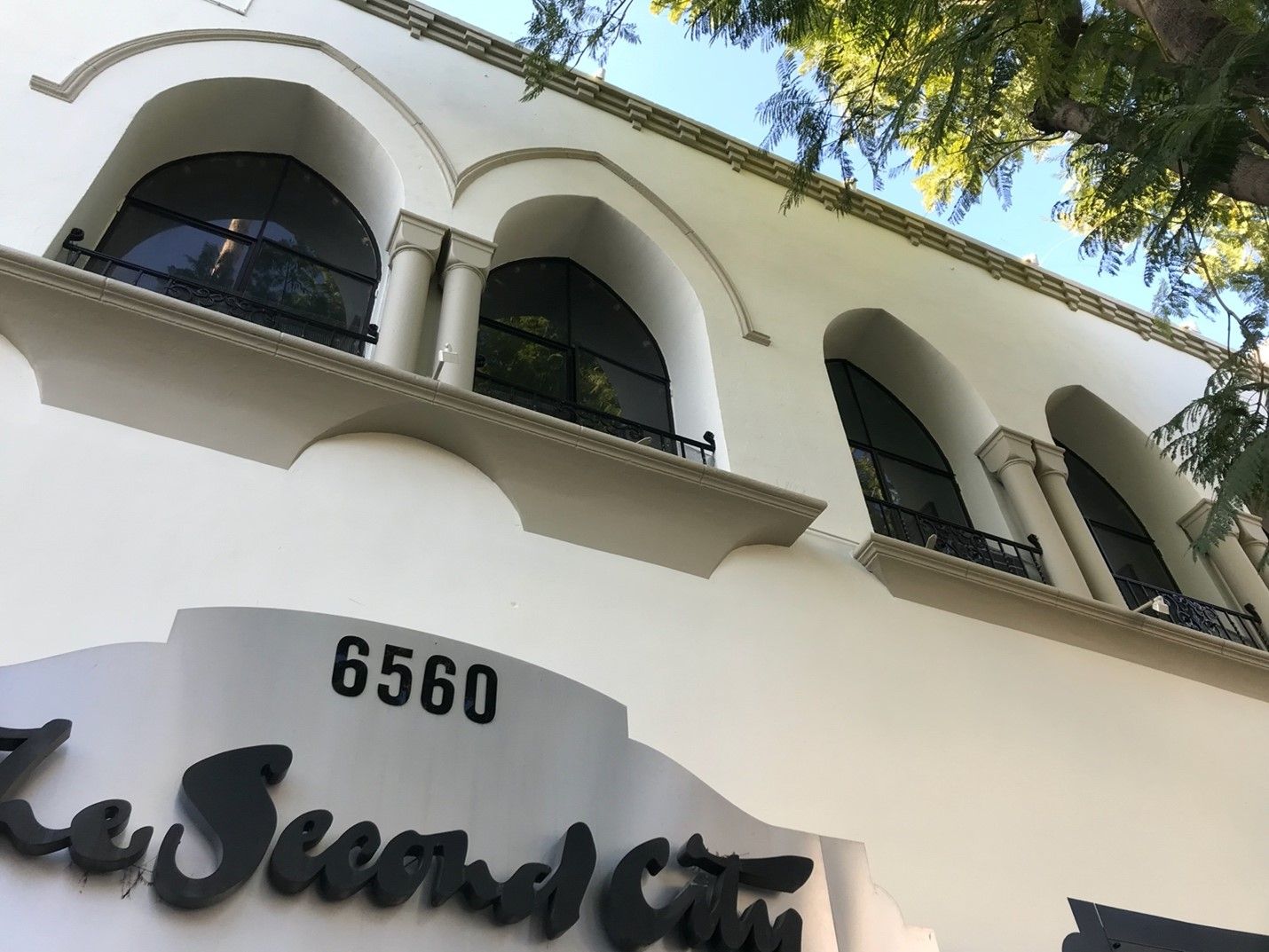 One of the tenants of the building was Second City Hollywood, the Los Angeles branch of the world-famous comedy theatre and school of improvisation. Within days of the termination of Second City’s occupancy, the second-floor interiors were renovated. It took the crew about a week to perform the cosmetic work and prepare the second floor for showings.

The Hollywood Studio Building is a fine example of Spanish Colonial Revival architecture. It gives visitors a sense of what shopping looked like during Hollywood’s golden era. The most recent renovation brings out the building’s grandeur, and will attract new tenants into the future.

The historic building on the corner of Hollywood Boulevard and Cosmo Street is known as the Palmer Building. It is on the Walk of Fame, close to the Pantages Theatre. The building is historically significant for its role in the Los Angeles newspaper industry, and is slated to be converted into a boutique hotel.

The Palmer Building was developed by Dr. Edwin O. Palmer, a founder of the Hollywood Chamber of Commerce. The four-story reinforced concrete structure—which has a two-story elevator tower on the roof—was built in 1921. There was retail on the ground floor, and offices on the second, third, and fourth floors.

The building was designed by Edward T. Flaherty in the Renaissance Revival architectural style. Detailing includes the full entablature above the columns, as well as spandrels and shields between the second and third floors. The ground floor has been repeatedly remodeled. 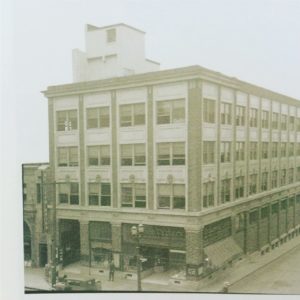 A historic photo of the Palmer Building from The Story of Hollywood by Gregory Paul Williams.

The building housed a printing press in the basement for a daily paper, the Hollywood Citizen-News. Harlan G. Palmer, Sr., a relative of Dr. E.O. Palmer, published and edited the paper for forty-five years. The Los Angeles bureau of the Associated Press also occupied the building.

Another interesting tenant was the Tail Wagger Foundation of America. Bette Davis, who was elected president of the Southern California branch in 1929, helped raise awareness of animal welfare issues from her office in the building.

Over the years, the upper floors of the Palmer Building were consistently occupied by commercial offices. Most recently, the building was the home of iO West, the Los Angeles branch of the Chicago improvisational comedy theater and training center ImprovOlympic. The owners of iO West discontinued operations in 2018. 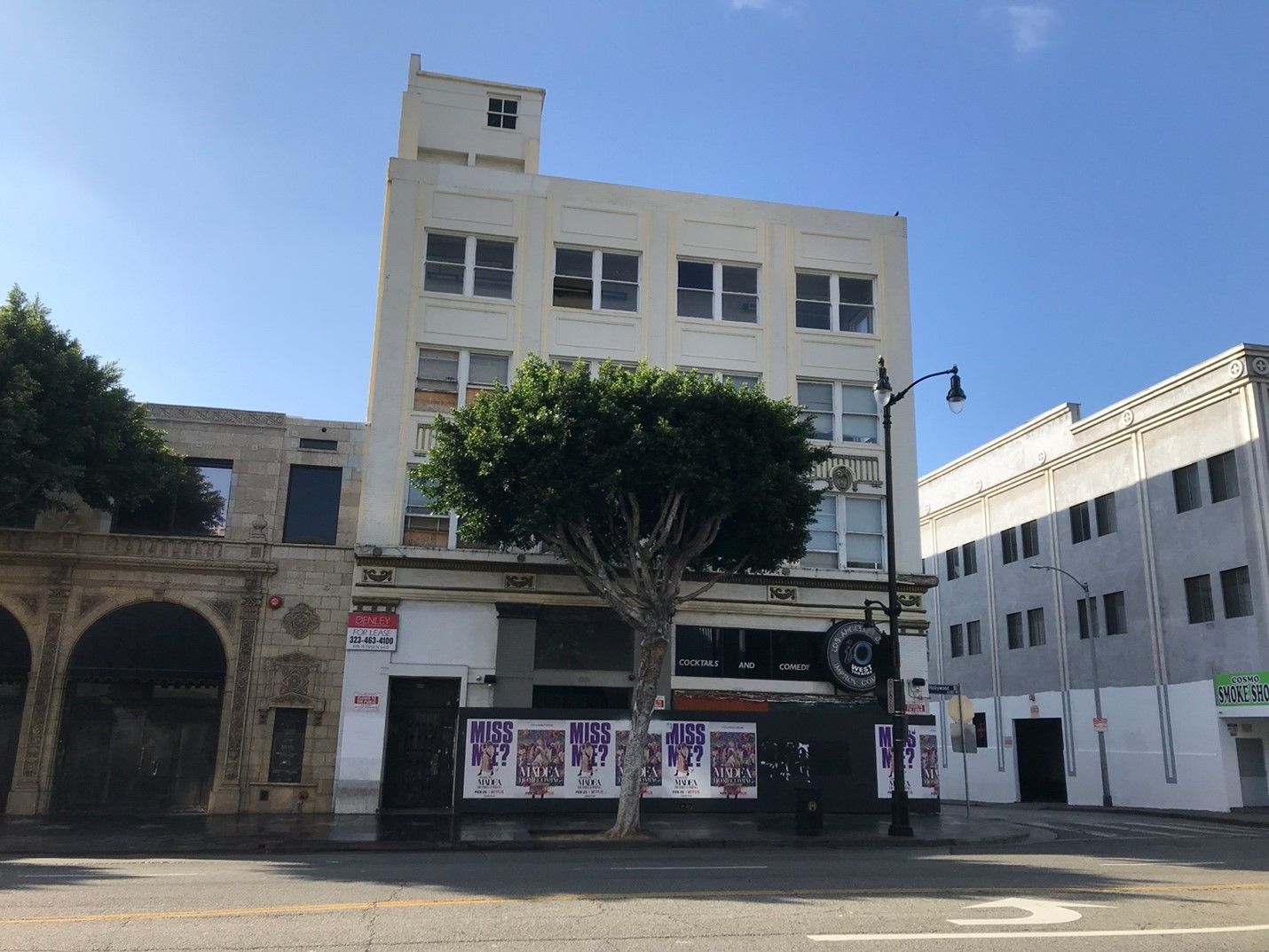 The Palmer Building is located at 6360-6366 Hollywood Boulevard. (Photo by Steven Herrera)

Orange County-based Artist Guild Hotels plans to convert the one-hundred-year-old Palmer Building into a 57-room hotel. In February 2022, the City of Los Angeles published an initial study on the plans, which show that the company wants to keep the building the same number of stories. The hotel rooms will be built on floors two through four. The study lists an anticipated 14-month construction timeline for the adaptive reuse project.

Under the project, the elevations of the building facing both Hollywood Boulevard and Cosmo Street would be preserved. The proposed work will follow Federal standards for the rehabilitation of historic structures.

The rooftop would have a restaurant, pool, bar, and sunning area. The basement level would include a mixed-use space that would function as a bar and a recording or visual arts studio. The first floor would contain the hotel’s lobby and reception area, a bar, a coffee shop, and a lounge. There would be valet parking accessible from Cosmo Street, and pedestrian access would be available from Hollywood Boulevard. 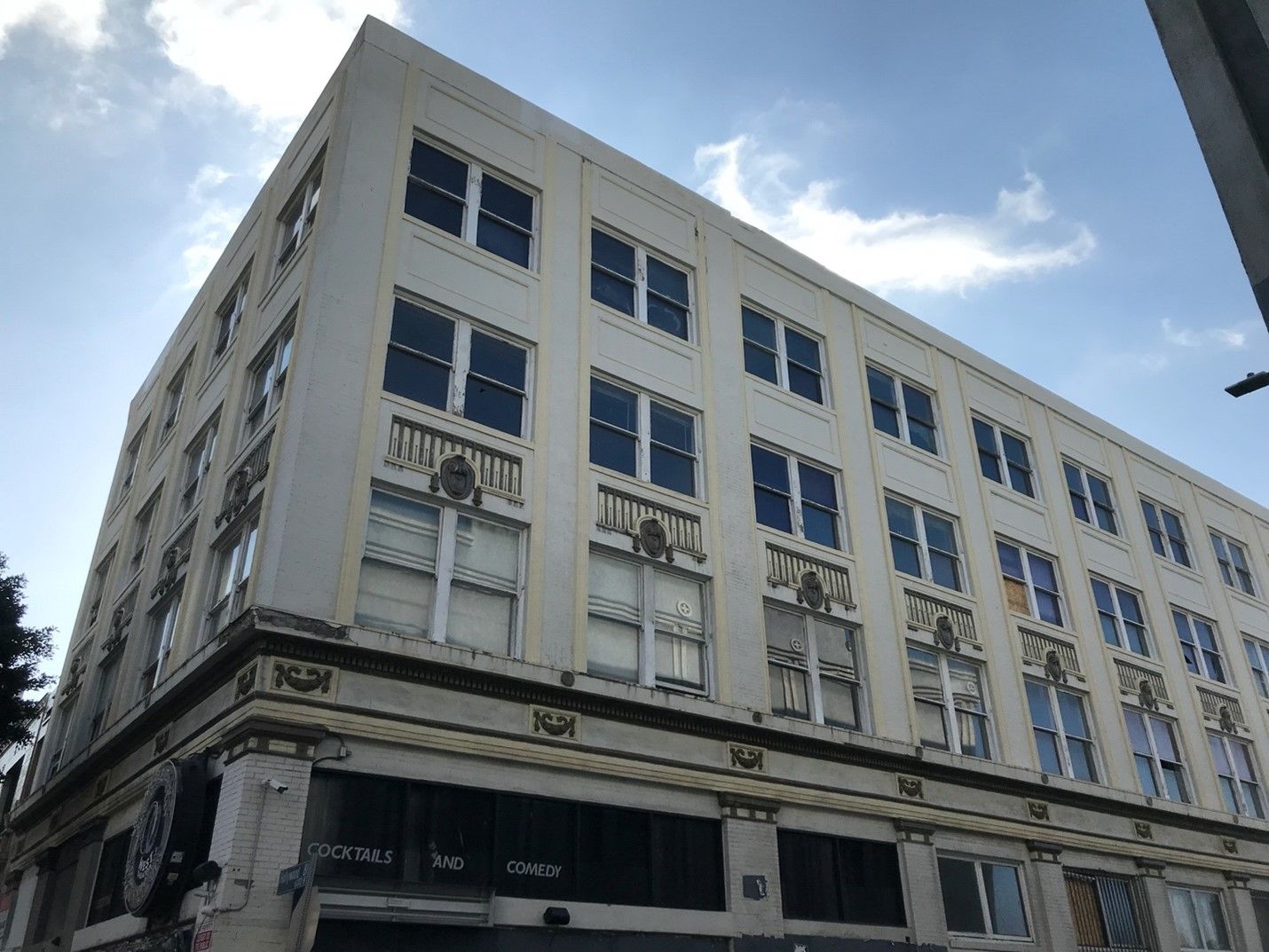 The Palmer Building has a rich history, starting out as a newspaper office one hundred years ago. It is now ready for an exciting new era as a boutique hotel. The business travelers and tourists who visit the property will contribute to the revitalization of Hollywood Boulevard.