Starting Monday morning, August 24, 2020, crews with StreetsLA will begin the work to install a permanent decorative street design to commemorate the historic All Black Lives Matter March through the Heart of Hollywood. The event was attended last June by at least 40,000 people to bring visibility to racial injustice and to highlight queer people in the Black community.

The project, which is a partnership with Councilmember Mitch O’Farrell, StreetsLA, Los Angeles Department of Transportation (LADOT), Black LGBTQ+ Activists for Change (BLAC), and other local community members, will involve the installation of a design similar to the original that is safer for vehicular traffic and will allow for the full opening of Hollywood Blvd near Highland Avenue. 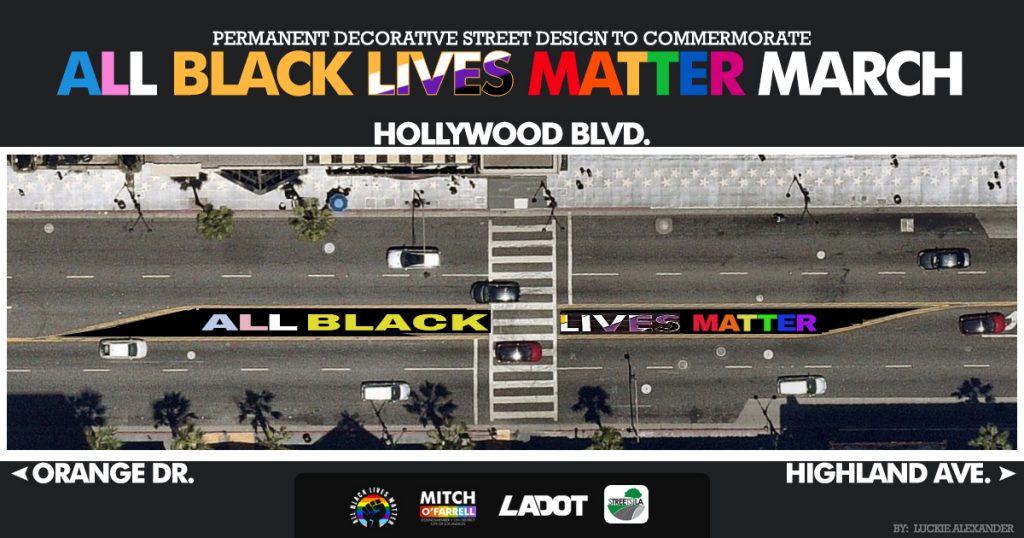 Rendering of the permanent street design to commemorate the All Black Lives Matter March in Hollywood, on Hollywood Blvd. just east of Highland Ave.

“Today, after years and years of violence against our Black and Queer communities, we are creating the first memoralized space in Los Angeles dedicated to transgender people of color,”  said Councilmember O’Farrell, an openly gay elected official on the Los Angeles City Council. “As the site of the first nationally recognized Gay Pride Parade in the nation, Hollywood must be and will be the safe space designated for this landmark distinction.  I want to thank StreetsLA, the Department of Transportation, the Department of Cultural Affairs, The Los Angeles Transgender Advisory Council, and most importantly members of Black LGBTQ+ Activists for Change for their collaboration and partnership to bring this permanent landmark to the 13th District.”

“Acknowleding the historic event in June, while elevating the conversation about the experiences of Transgender and Queer people of color, is critical as we progress in the movement to ensure the visibility of  our community,” said Karina Samala, Chair of the City of Los Angeles Transgender Advisory Council. “Thank you to all who worked to see this project realized.”

“StreetsLA, with a mission to enhance the quality of life for all, is proud to be part of commemorating the All Black Lives Matter demonstration," said Adel Hagekhalil, Executive Director and General Manager of StreetsLA. "Streets connect people. This street installation is a reminder for us to join hands, hearts and minds to make our communities safer with opportunity, freedom and justice for all.”

“The installation of the ALL BLACK LIVES MATTER commemorative sign on Hollywood Blvd. was extremely emotional for me as a Black transman,” said Luckie Alexander, artist of the All Black Lives Matter street art and member of BLAC. “This is something that will let our Black LGBTQ+ community, especially our Black trans siblings know they are seen, valid, and valued. This act by Councilmember O'Farrell and his team, backed by the City of Los Angeles, gives me hope that we are not fighting alone as a community.”

On Saturday, June 13, hundreds of volunteers turned out on Hollywood Boulevard to temporarily install the words “ALL BLACK LIVES MATTER” between Highland Avenue and Orange Drive.  The letters were painted utilizing the colors of the Transgender, Non-Binary, and Pride Flags. The image of the work went viral on social media, capturing worldwide attention. The artwork was a collaboration between members of BLAC and Hollywood-based entertainment marketing company, Trailer Park Group led by CEO Rick Eiserman.  Councilmember O’Farrell partnered with the group on the permits for the temporary installation.

The March, organized by BLAC, was an opportunity for Los Angeles to stand alongside Transgender and Queer individuals in the Black community.

Since that time, Councilmember O’Farrell worked with the Black queer community to initiate a Council motion that directed all relevant City departments, including but not limited to the Department of Cultural Affairs, Department of Transportation, and Streets LA, to work with community partners to conceive and report on options for permanent public art in Hollywood in commemoration of the “All Black Lives Matter” march.

On August 13, the initiative was heard in the Health, Education, Neighborhoods, Parks, Arts, and River Committee, and the permanent installation was unanimously approved by the City Council on August 19.