Janes House: Hollywood's Oldest Remaining Residence Goes From a School to a Speakeasy 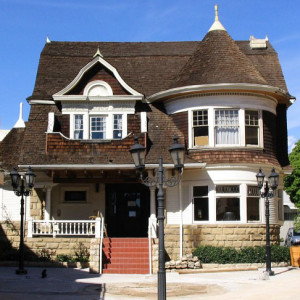 Hollywood Boulevard is home to many of Los Angeles’ oldest and most famous landmark buildings. But as you walk along, you may have passed within yards of Hollywood's oldest remaining home without realizing it was there. That honor goes to the Janes House, a Queen Anne/Dutch Colonial Revival single-family house tucked away from the street behind a soundproof wall at 6541 Hollywood Boulevard (between Hudson and Whitley) as part of the Janes House restaurant/courtyard complex. Built in 1903, it was one of a parcel of model Victorian homes developed by H. J. Whitley on what was then Prospect Avenue (renamed Hollywood Boulevard in 1910).

Whitley sold 241 West Prospect Avenue to the Janes family of Aurora, IL for $10,000 in 1903.  The family, consisting of Herman, his wife Mary and their four children Mabel, Carrie, Mary, and Donald, occupied the property in 1905. In 1911, the women of the household opened a kindergarten with 15 students, soon expanding to serve K-8th grade at The Misses Janes School of Hollywood. The school catered to the children of such notables as Charlie Chaplin, Jesse Lasky, Douglas Fairbanks Sr., Thomas Ince and Wallace Beery. More than 1000 kids attended over the next 15 years, often taking their lessons in the Victorian’s back yard.

But after Mr. & Mrs. Janes passed away their daughters fell on hard times and the school was forced to close in 1926. The ladies continued to live in the house and to make ends meet, brother Donald set up a gas pump (Janes Auto Service) in the front yard to cater to the new auto culture. That spacious front yard along Hollywood Boulevard eventually became a parking lot and after her husband’s death in 1964, Carrie rented the space to a florist and other tourist businesses. 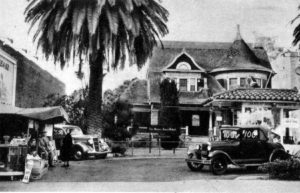 After the school closed, the front yard of Janes House was home to the Janes Auto Service Station.

As Hollywood Boulevard decayed, so too did the house. Despite the attention of an onsite caretaker named Guy Miller, the last remaining Victorian declined rapidly throughout the 70’s. The siblings died off leaving sister Carrie to live in a converted front window box in the kitchen until 1982 when she was moved to a nursing home in the Valley. She died the next year at the age of 94. Despite the property having been declared a landmark in 1982, and the valiant efforts of Mr. Miller and Hollywood Heritage, it was sold to a developer in 1984 for $600,000. 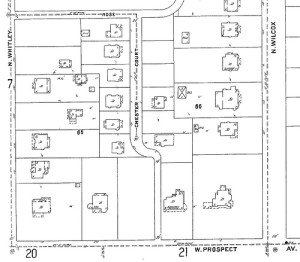 In this original plot plan, Janes House was located second from bottom left.

In 1985, the new owners moved the house to the back of the lot and built a 14,000 sq ft mini mall of the same ornate style in front. The house itself has undergone a variety of makeovers since then and has been at various times a visitor center, restaurant and nightclub. Today, it is a 20s-themed speakeasy called No Vacancy at Hotel Juniper, another venture of bar masters, Mark and Jonnie Houston (Harvard & Stone, Good Times At Davey Wayne’s).

One interesting note. In his book “Hollywood Remembered: An Oral History of Its Golden Age,” author Paul Zollo states that Henry Farrell, the author “who wrote the novel on which Whatever Happened to Baby Jane? was based, is said to have gotten the idea for his story from the Janes sisters. Bette Davis played Jane Hudson, the street the house faces was called Hudson.” Hmmmm.

Kim Sudhalter is the President of Urban Legend PR, a full-service public relations, branding and marketing company.  She consulted with the Hollywood Entertainment District in its early years, helping to attract investment and revitalize the area. Originally from Europe and New York, she is an architecture and history buff who has a deep and abiding love for Hollywood and its past. 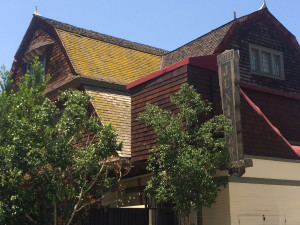 No Vacancy resides in Hollywood's most historic home built in 1902. 3 stories of vintage design and handcrafted cocktails.