Have You Ever Wondered… Why There’s a 1920s-Era Apartment Building Right in the Middle of a Business District?

If you’ve ever walked down Hollywood Boulevard near Wilcox, you will most probably have noticed a beautiful, ornate apartment building right at the corner of Hudson and Hollywood. Today known as the Hudson Apartments, the building was once called the Hillview Apartments and was home to many of the silent film era’s greatest stars. 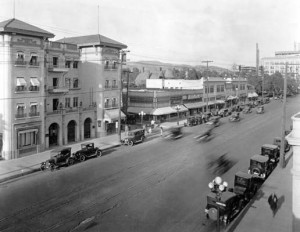 The year was 1918 and the film industry was bustling with excitement…the Golden Era of Hollywood was just around the corner.  Hollywood Boulevard had become the main street of the film capital of the world and everyone was welcome—everyone except actors.  Imagine strolling down Hollywood Blvd and seeing signs in apartment windows that read, “No Actors, No Dogs.”  Considered by landlords to be unreliable tenants, housing was short for anyone in the film industry.

It was at this time that movie mogul and film pioneer, Jesse Lasky, decided to take action.  Together with partner Samuel Goldwyn, Lasky built Hollywood’s first apartment building designed specifically to house the actors that worked at nearby movie studios.  The Hillview Apartments quickly become Hollywood’s most sought after residence.

Designed by the Tifal Brothers in the Mediterranean Revival style, the 4-story building was smooth finished in stucco and decorated with plaster details and tile.  The U-shaped building was entered through a grand courtyard off Hollywood Boulevard and was graced by two elegant storefronts at the front entrance.  Two towers, topped with flagpoles, distinguished the façade and a red-tiled roof completed the elegant effect. The building offered all the latest amenities such as a large parlor lobby, a writing room, a ladies waiting room, garbage incinerators, automatic elevators, hardwood floors and interiors finished in mahogany.

Over the years the building housed some of the era’s most famous silent film stars.  Screen siren Viola Dana was a resident during the early 1920’s. Mae Busch, the flirtatious beauty known for her comedic performances in numerous Laurel and Hardy movies also lived at the Hillview Apartments. Records indicate that Oliver Hardy was once a tenant and that Charlie Chaplin may have briefly held ownership of the building. The basement level was used as rehearsal space for the actors that lived in the building and, at one time, was reputed to have been the site of Rudolph Valentino’s speakeasy.

The building housed tenants on Hollywood Blvd. all the way up to 1994 when it suffered structural damage during the Northridge Earthquake and construction of the subway tunnel.  A fire in early 2002 caused further damage and severely threatened the building’s future.  It was saved from destruction in 2002, and completely refurbished. The building was renovated in 2006 with new kitchens, marble counter tops, washer dryers in each unit and refurbished elevators. Today the building is home to a new generation of writers, actors and other professionals—keeping the tradition that Jesse Lasky and Samuel Goldwyn started more than a century ago alive. 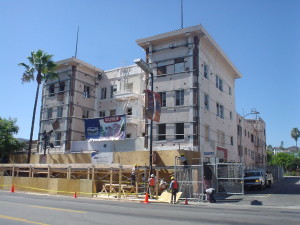 Hillview Under Construction in 2003 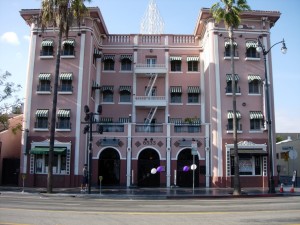 Kim Sudhalter is the President of Urban Legend PR, a full-service public relations, branding and marketing company.  She consulted with the Hollywood Entertainment District in its early years, helping to attract investment and revitalize the area. Originally from Europe and New York, she is an architecture and history buff who has a deep and abiding love for Hollywood and its past.