The intersection of Sunset and Gower is well-known as Gower Gulch – but not everyone knows why.

The strip mall located there includes signs for faux frontier businesses along with its real tenants, including Starbucks; but while the shopping center might resemble the remnants of a Western movie set, it never was.

The corner did once house Hollywood’s first film studio: in 1911, it served as the site of a shoot for a Western called The Law of the Range, using a vacant tavern and its garden as a set. But that’s not why the strip mall has the name Gower Gulch.

In the 1930s and 40s it was the hangout of working cowboy extras, waiting to be hired to work in Western films. 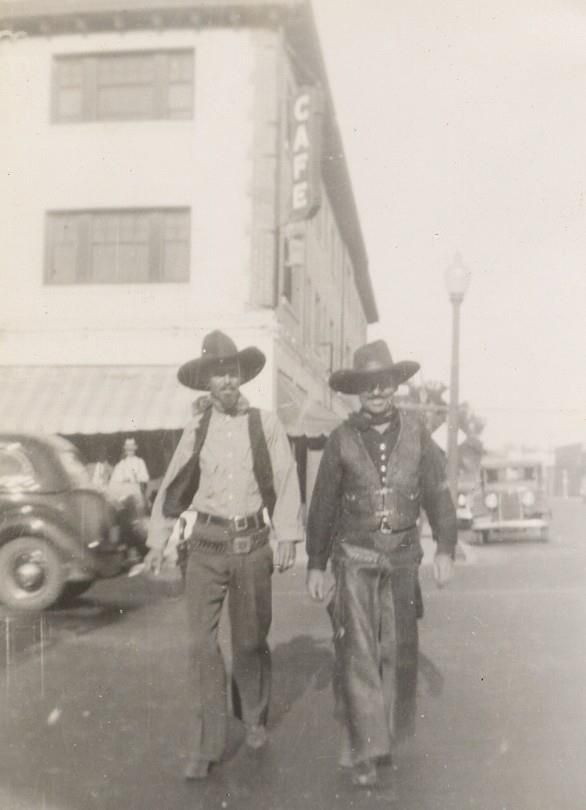 The epicenter was the Columbia Drugstore, located at the southeast corner of the shopping area, where the men congregated and were referred to as “drugstore cowboys.” They stood out in their boots and Stetson hats and leather vests. Sometimes as many as 50 cowboy extras waited around in cowboy gear; their attire making them ready to walk straight on to any Western film set shooting near by.

The drugstore was the center of the action in part because it had a phone booth from which the cowboys could call Central Casting. It was also the spot of an infamous shooting between one Jerome B. “Blackjack” Ward and his enemy, John Ainsworth Tyacke, also known as Johnny Tyke. 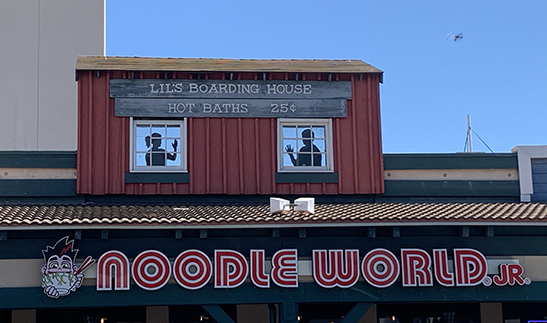 Ward reportedly accused Tyacke of fooling around with Ward’s girl; as the accusations escalated, other cowboys circled the men ready to watch a fight over a girl named Julie. But it was more than a fight. Ward not only called out Tyacke, he pulled a .45 on him. Tyacke lunged for the gun, but Ward fired, shooting him in the shoulder.

As Tyacke fell to the ground, he recited a list of Ward’s sins – which he described as “steps to hell,” and shot him one time for each of the six steps he cited.

Having shot his rival in broad deadlight, Ward was arrested and charged with murder. When a trial commenced, there were a wide range of witnesses in Superior Court Judge A.A. Scott’s courtroom, all clad in cowboy attire. Ward pled not guilty for two reasons. He claimed self-defense, saying Tyacke attacked him with a knife, and he also claimed himself not guilty by reason of insanity. Somehow, the trial was brief if tumultuous, and the case was dismissed. Tyacke walked free. 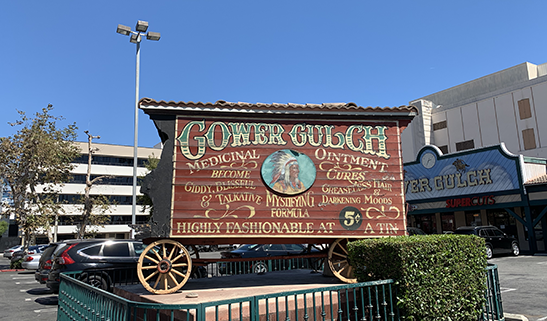 In 1976, the developers of Gower Gulch paid tribute to the property's history of being associated with Western movies and television. (Photo by Devin Strecker)

But back to Gower Gulch: the shoot-out and sensational trial are the reasons that  Gower Gulch got its name.

The shooting that inspired the moniker may often be forgotten, but the strip mall’s new name stuck. It was featured in many films and shorts, including Abbott and Costello’s 1942 Ride ‘Em Cowboy. It was the setting for a 1950 film, The Kid from Gower Gulch, a comedy that featured Spade Cooley as a Western star who didn’t know how to ride, sing, or fight.

But as Western films faded from the zeitgeist of popular culture, the cowboy extras, unneeded, faded too. Columbia Drugstore closed and a developer built the western-themed strip mall in 1976, naming the mall itself Gower Gulch. A Rite Aid drug store took the place of the Columbia. The themed shopping center included a wagon in the parking lot; a large-scale mural of a stage coach and Western stars on a wall, and signs for an imaginary livery stable and blacksmith shop. 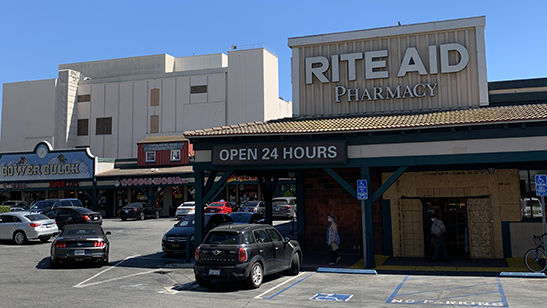 A Rite Aid Pharmacy is now located where the Columbia Drugstore once was. This Rite Aid suffered vandalism and looting during civil unrest in early June, 2020, but was able to reopen soon afterward. (Photo by Devin Strecker)

For the past fifty years, Gower Gulch has been owned by the Hornwood family. "As a child, I went to the center every week, watching my grandparents - and then my parents - go from store to store talking to owners and managers and writing lists of to do items," Laura Hornwood Margo, said.

Today, change is afoot. The property just west of Gower Gulch began emptying of retail tenants last December, preparing for the transformative construction of a new seven-story residential-retail project at 6200 Sunset, with plenty of open space, and a parking garage. 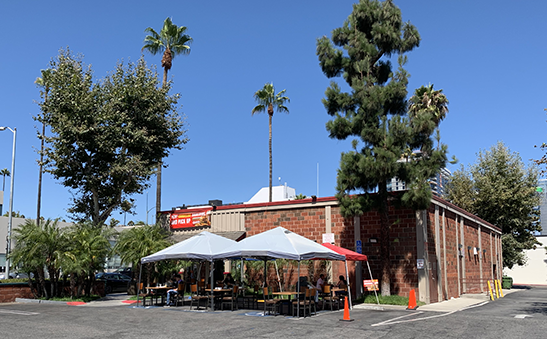 In response to the Covid-19 pandemic, the Denny's location at Gower Gulch has created an outdoor dining space. (Photo by Devin Strecker)

Gower Gulch continues to be a frequently visited destination by locals, news station anchors and executives, movie productions and media professionals who work at nearby studio lots and that the center offers. Many benefits to locals include a diverse restaurant offering, Rite Aid store, printshop and more. Please continue to support our local businesses, many of which are small businesses.