On Wednesday, September 29, a seemingly nondescript alley near Cahuenga Boulevard and Cosmos Street received its due - as the spot where Charlie Chaplin, Buster Keaton, and Harold Lloyd all filmed popular silent movies with comic grace.

Having made its appearance in countless films of the era, from Chaplin’s The Kid to Keaton’s Cops and Lloyd’s Safety Last!, the alley itself is now a star. The alley area received a permanent plaque commemorating its location in these comedy classics among many others, appropriately on the first-ever National Silent Movie Day. 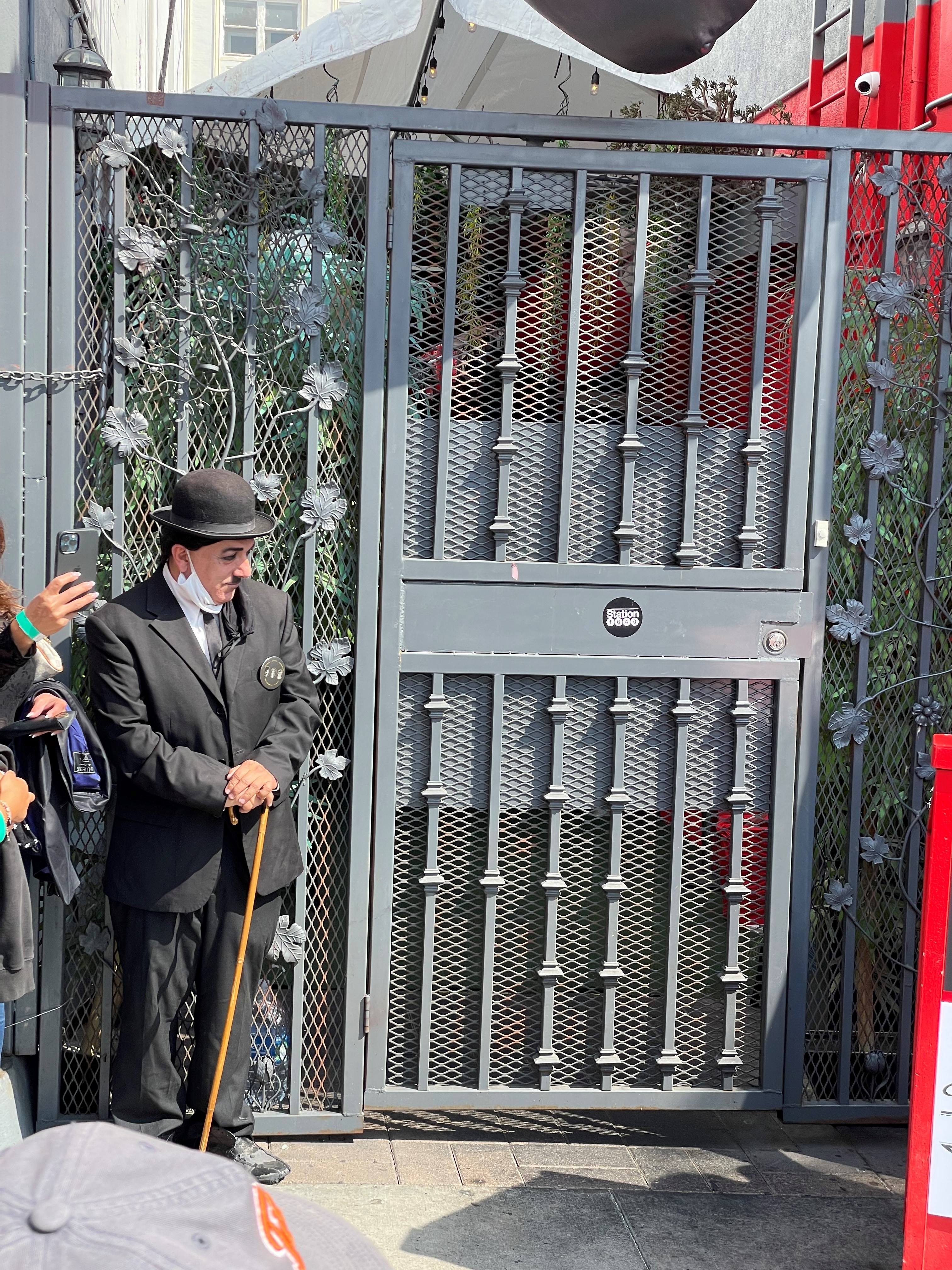 The previously unnamed alley is now designated as the Chaplin-Keaton-Lloyd Alley. To date, the alley has been identified as having appeared in at least two dozen silent era films, starring the iconic comics as well as other stars like Douglas Fairbanks, Oliver Hardy, and even Harry Houdini himself. Filmmakers including pioneer female directors Lois Weber, Grace Cunnard, and others shot a wide range of scenes at the previously nameless and unsung pedestrian alley.

Why did they choose this short alley south of Hollywood Boulevard? The choice of staging here was in part due to the proximity of what was then the town’s – and filmmaking’s - center, and due to limited production resources available to travel elsewhere. Combined, for these reasons, the alley is arguably the busiest filming location of the era. 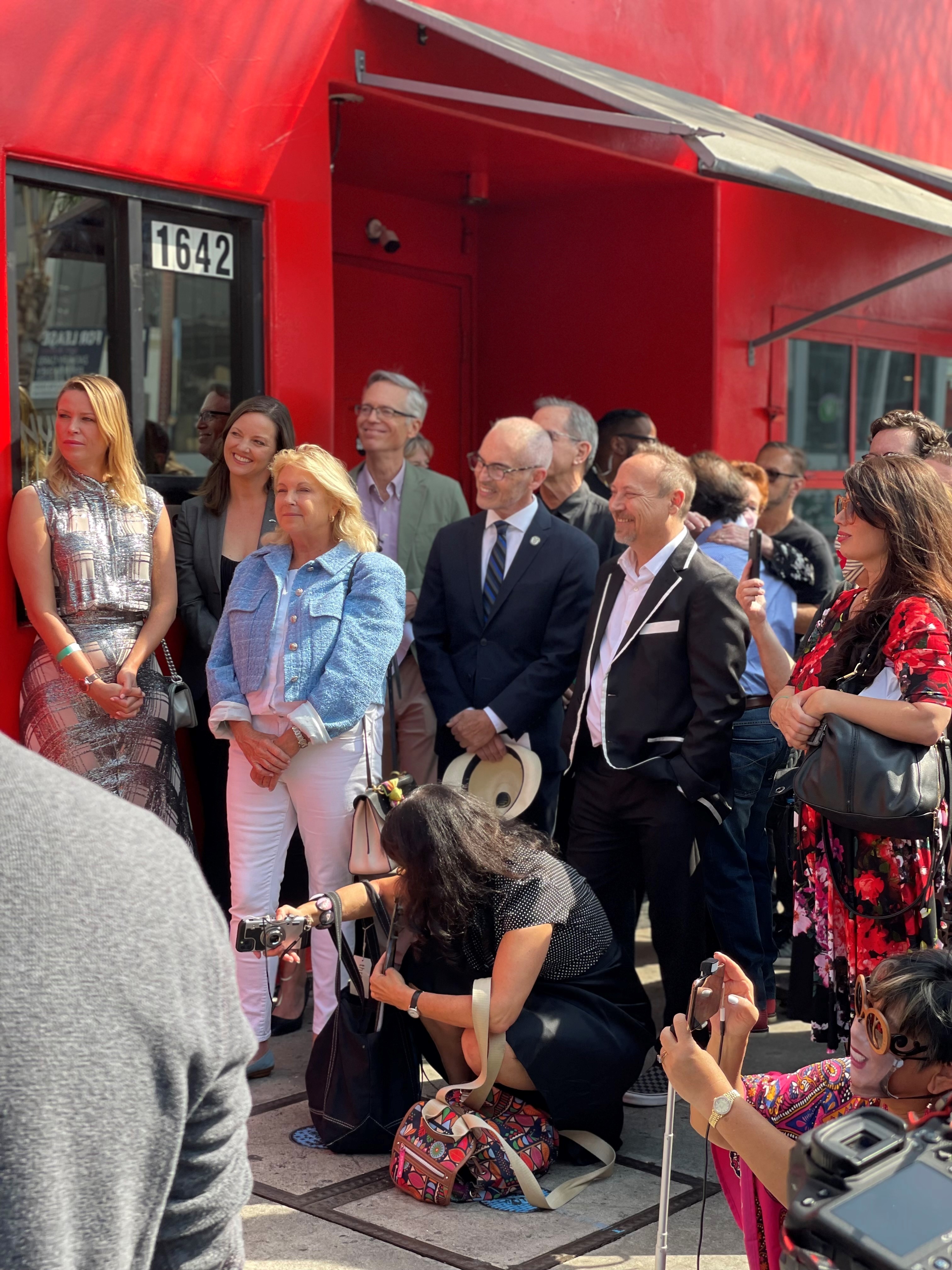 Spectators gather to celebrate the dedication of the Chaplin Keaton Lloyd Alley in Hollywood on September 30, 2021.

As an existing part of the pedestrian mall established by the Los Angeles City Council in 1960, the alley’s now-historic designation is part of The Hollywood Partnership's goal to develop and restore public areas in Hollywood’s historic core, and in doing so, make the area a more sought-after destination for locals and tourists alike – and all those who care about film. 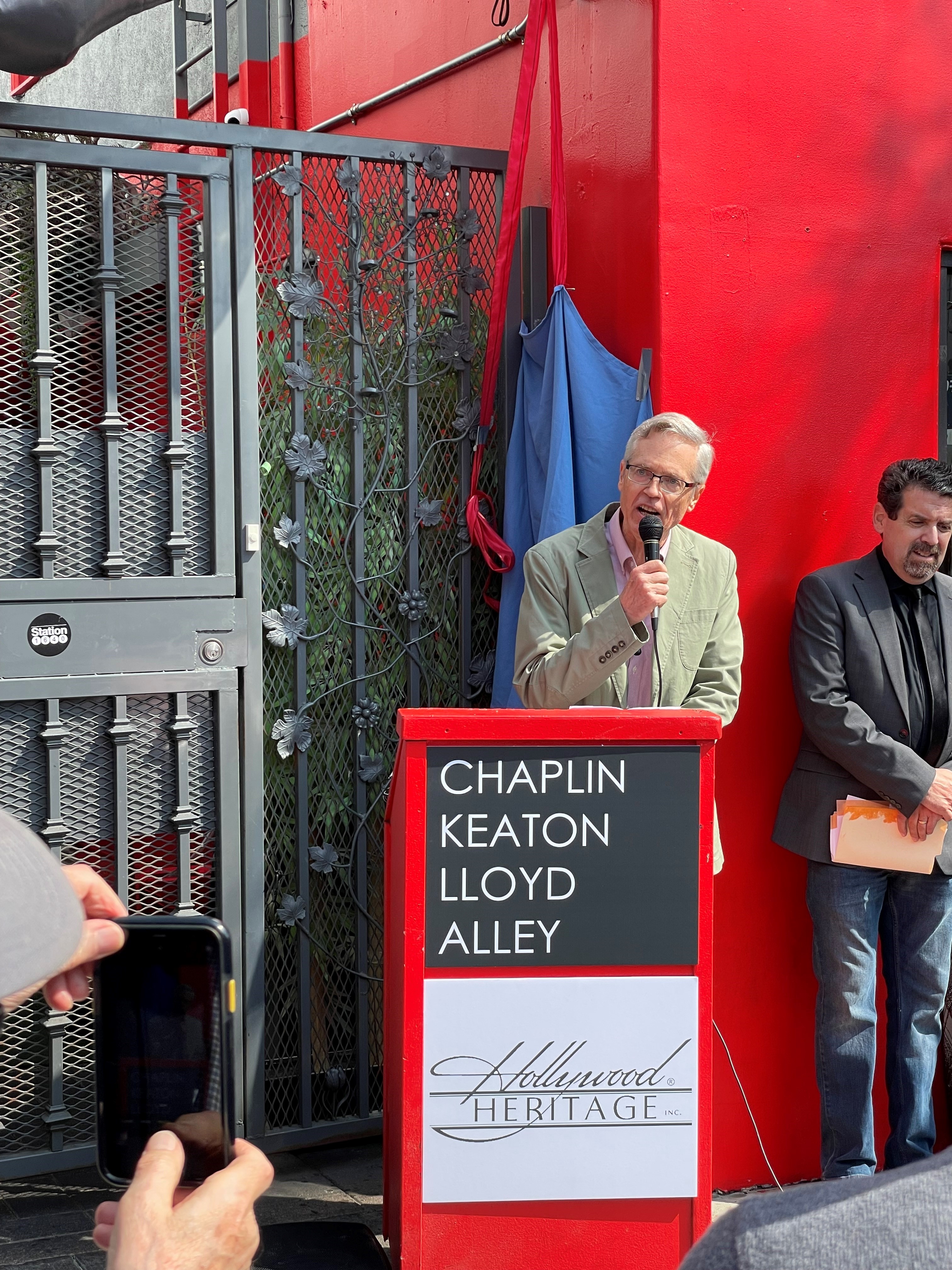 John Bengtson, film historian and author of "Silent Echoes," speaks at the dedication of the Chaplin Keaton Lloyd Alley in Hollywood on Sep. 30, 2021.

During the dedication ceremony, Curran dedicated and unveiled the plaque honoring the late, great comedy geniuses and silent era filmmakers who filmed at the alley and noting that the site is also a tribute to Hollywood itself, and its heritage in the film industry and to the nation.

Around the corner at Dash Radio on Hollywood Boulevard, a special installation about the era was screened on window monitors, as well as available online with an exhibited QR code, allowing comedy fans to gain more insight into the alley itself and the filming that took place there. 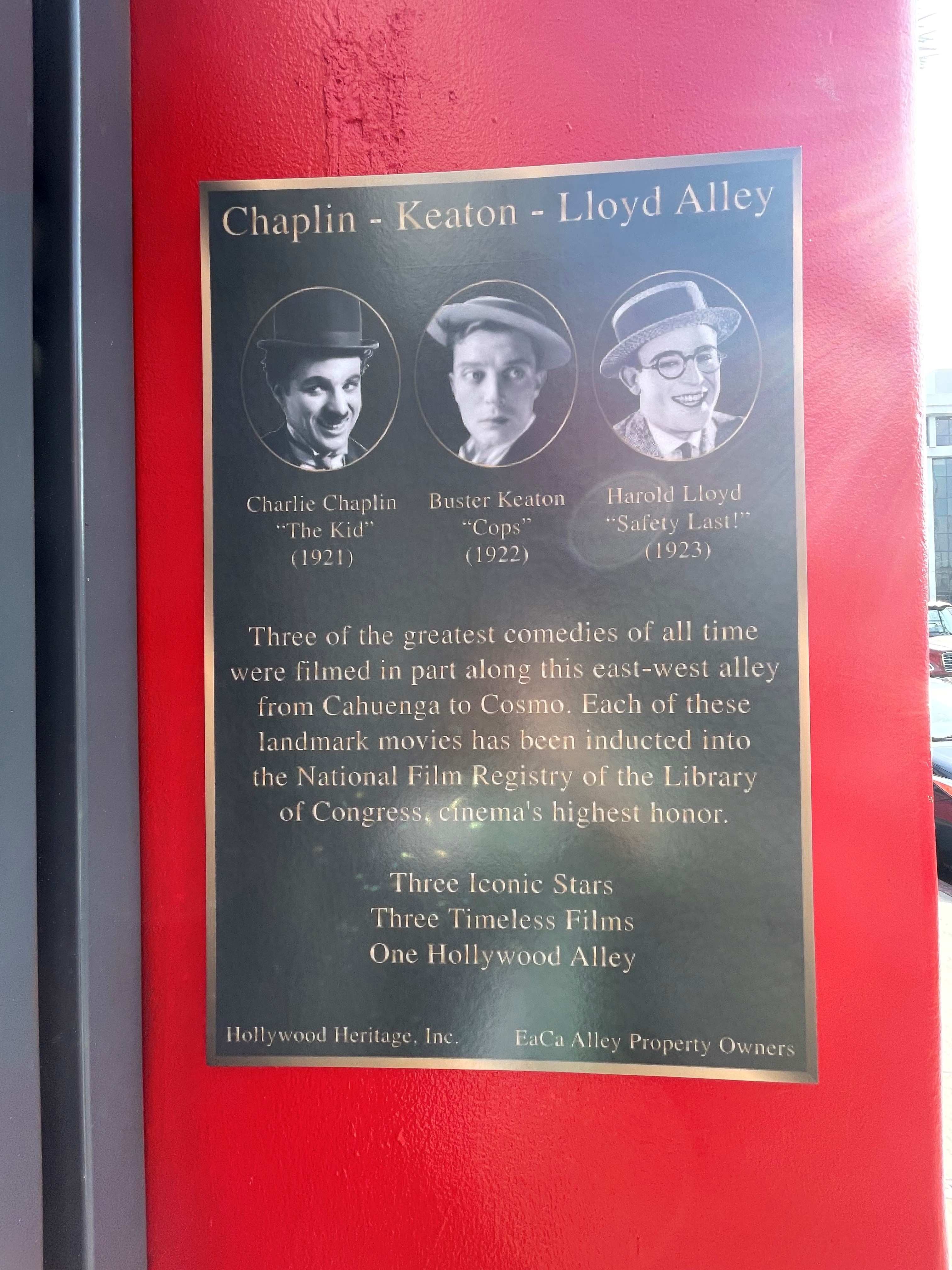 And, through October 6, Hollywood Heritage is also streaming its documentary about Keaton’s The Kid. For tickets, click here.  And, to view a free program about the silent film locations in the area, click here.

Hollywood Heritage began in 1980, predating the Hollywood redevelopment plan proposed in 1984, which included within that plan the protection of historic sites in the area. Hollywood Heritage nominated and successfully listed a thirteen-block stretch of Hollywood Boulevard in the National Register of Historic Places, which tells the story of some of Hollywood’s most important eras and its contributions of national importance. 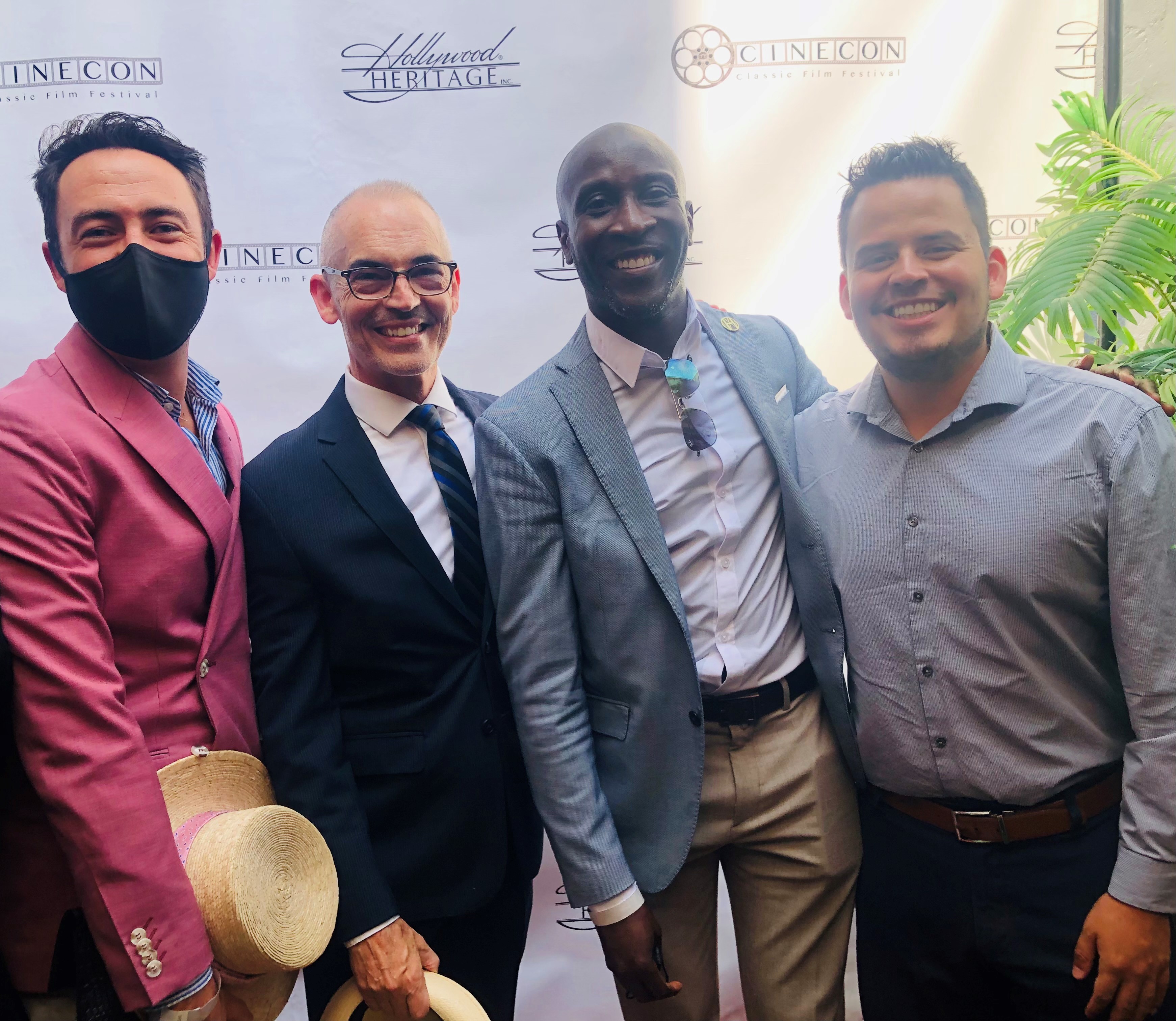 The alley’s dedication was a fitting component of both the original redevelopment plan, and of the first National Silent Movie Day. The day is designated as an annual celebration of silent movies. Advocating for the preservation and presentation of silent film, its organizers believe silent film is an important and often-overlooked era of film history. Marking the day allows film fans and programmers, archivists, and educators to share their appreciation for these films and raise interest and awareness of the films that remain for viewing from this period.

In short, National Silent Movie Day is a time to celebrate a vital era in cinema, and the dedication of Chaplin-Keaton-Lloyd Alley, as well as the support for the alley’s rehabilitation, could not have come at a better time.