As bartender Tarek Martin laughs “The bar is a perfect mix of neighborhood regulars, tourists, and all-around professional drinkers.”

The Frolic Room, located next door to the Pantages Theater is also arguably the most historic and quintessential dive bar in Hollywood. Open every day from 11 a.m. to 2 a.m., this watering-hole has gone through a variety of permutations over the years. It began serving as a private speakeasy lounge originally called Freddy’s, then opened to the public in 1934, as Bob’s Frolic Room. 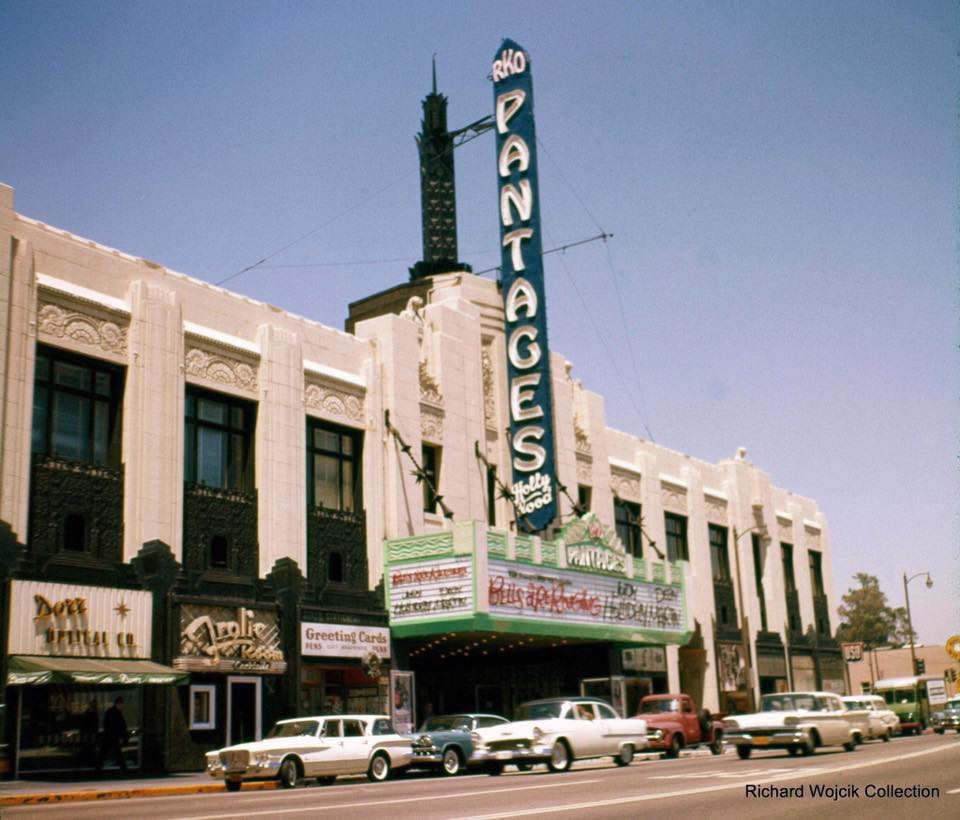 Historic photo of the Pantages Theatre, with the Frolic Room at left, from the Richard Wojcik collection. (Courtesy photo)

Cozy, dark, and featured as a set in numerous period films – including The Black Dahlia and L.A. Confidential, the bar is many things to many people. It’s a classic, pre-theater watering hole for Pantages’ patrons, a legitimately kitschy hangout for tourists and Hollywood history buffs, a neighborhood bar with a bevy of regulars and a killer juke box, and a landmark for fans of writer Charles Bukowski. Bukowski, the wayward author as famous for his drinking as his writing, made the Frolic Room a frequent stop. His portrait hangs above the register, and for a time, there were weekly readings of his works held at the bar.

The Frolic Room was also reputedly the last place the real Black Dahlia, Elizabeth Short, was seen alive. Both Frank Sinatra and Judy Garland also imbibed here. Howard Hughes owned both the Pantages and the bar from 1949 to 1954. He added the colorful, artistic neon bar sign above the door that still welcomes patrons today, as well as throwing lavishly wild parties.

“The history of the bar, the fact that it is the oldest bar in Hollywood, people know about that, and want to come in just to soak up the atmosphere. If the walls could talk, the stories they could tell would be pretty cool,” Martin notes. “There are so many legends about the place, whether it’s about Bukowski drinking here, or Elizabeth Short being last seen here. It’s a lot of fun telling the stories, sharing the theories, whether they are true or not. People really enjoy them.”

On the eastern wall, a storied mural by artist Al Hirschfeld features caricatures of celebrities in full color. 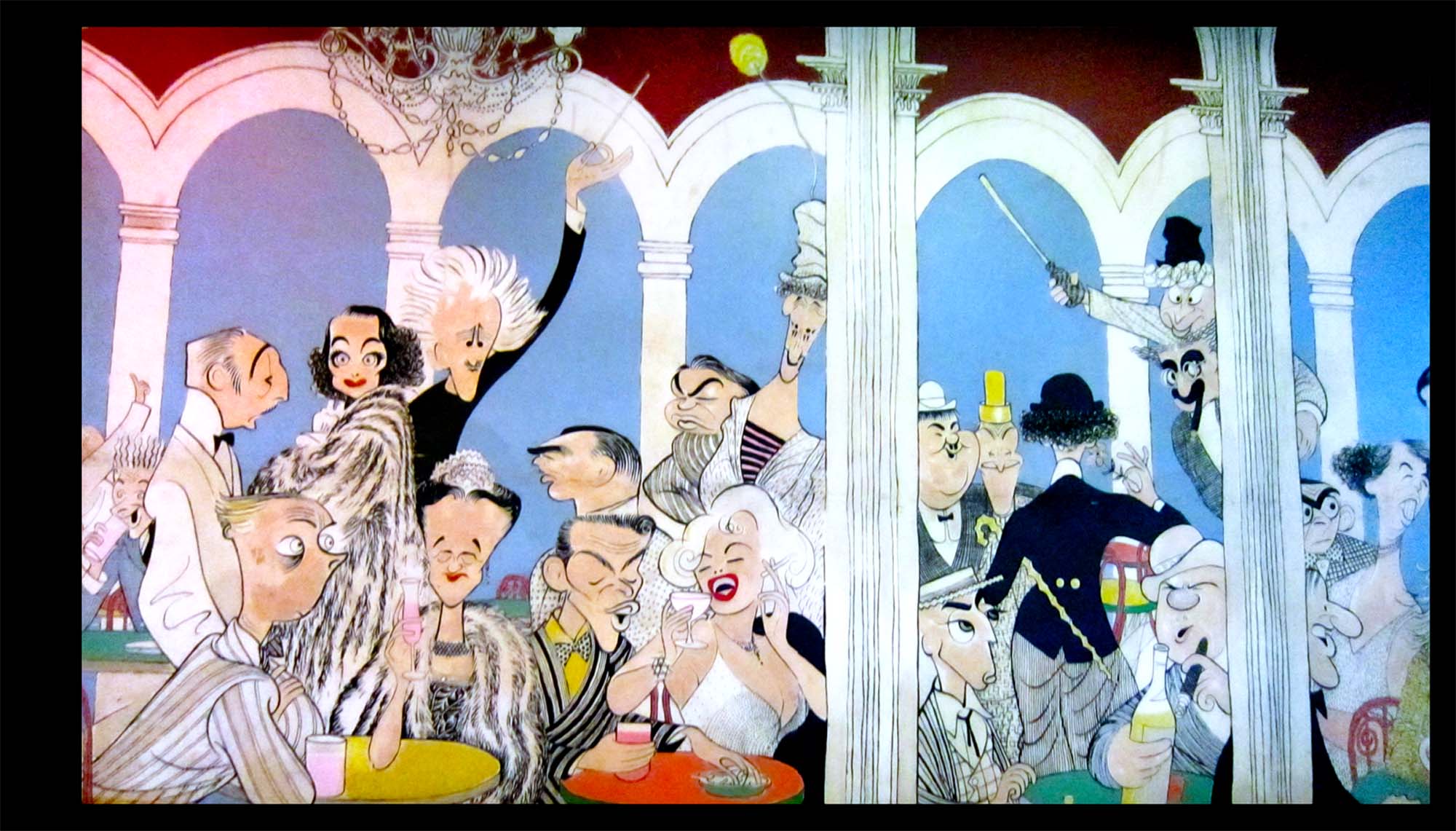 The mural inside the Frolic Room by artist Al Hirschfeld. (Courtesy photo)

“The mural is a big attraction. It was installed in 1963, and was restored not that long ago. We have glass over the bottom portion of it now so that people can’t write on it or mark it up. It’s a real landmark,” Martin attests.

Artist Oscar Ropide carefully worked on restoration of the classic piece in 2012.  Albert Einstein, Clark Gable, Laurel & Hardy, Marilyn Monroe, and Tallulah Bankhead are among the iconic 1960s-era celebrities depicted on the full color panels. The Frolic Room, with its convivial vibe, red pleather seats, and dim space-ship style ceiling lights would seem to be the perfect place to find Einstein and Monroe interacting in real life, although alas, they did not.

Hirschfeld called himself a “character-ist,” not a caricaturist, often included the name of his daughter, Nina, in capital letters hidden in his work – and did so in this piece, three times. Hunting for the name is an activity that many bar visitors indulge in – when they’re not ordering classic, reasonably priced drinks.

“We’re an old-school bar,” Martin explains.  “We are not a mixology spot, we serve beer and shots.” He adds that orders differ depending on the time of day and the crowd. “When people are going to the Pantages and they’re dressed up and they stop in for a drink, they tend to order more classic cocktails. But we serve everything you can think of, across the board.”

One of his most frequently ordered cocktails is a martini. “This is such a classic Hollywood dive, that’s really the perfect drink for the place.”

But there are plenty of other choices served up by bartenders who are known for their no-nonsense skills, pouring everything from a Bloody Mary made with Sriracha hot chili sauce to a generous Old Fashioned, a Tiki-like pineapple and rum, raspberry Chambord, and even Pernod, the anise-flavored liqueur that turns milky when water is added. According to Martin, the bar has just about any alcoholic beverage a patron can think to order.

“What I’d most like people to know about the Frolic Room is that our bartenders are great, and we will take care of you whether we know you or not,” Martin says.

And there’s plenty of Hollywood history to enjoy, besides.