Ike’s Love & Sandwiches is a unique quick service restaurant that recently opened on Vine Street, just north of Sunset Boulevard. It is located on the world-famous Walk of Fame, close to the Montalbán Theatre, a venue known for its rooftop movie screenings. The store differentiates itself through its incredible selection of sandwiches, and personalized branding.  This new tenant will appeal to hungry locals and tourists seeking lunch or dinner while visiting the famous intersection. 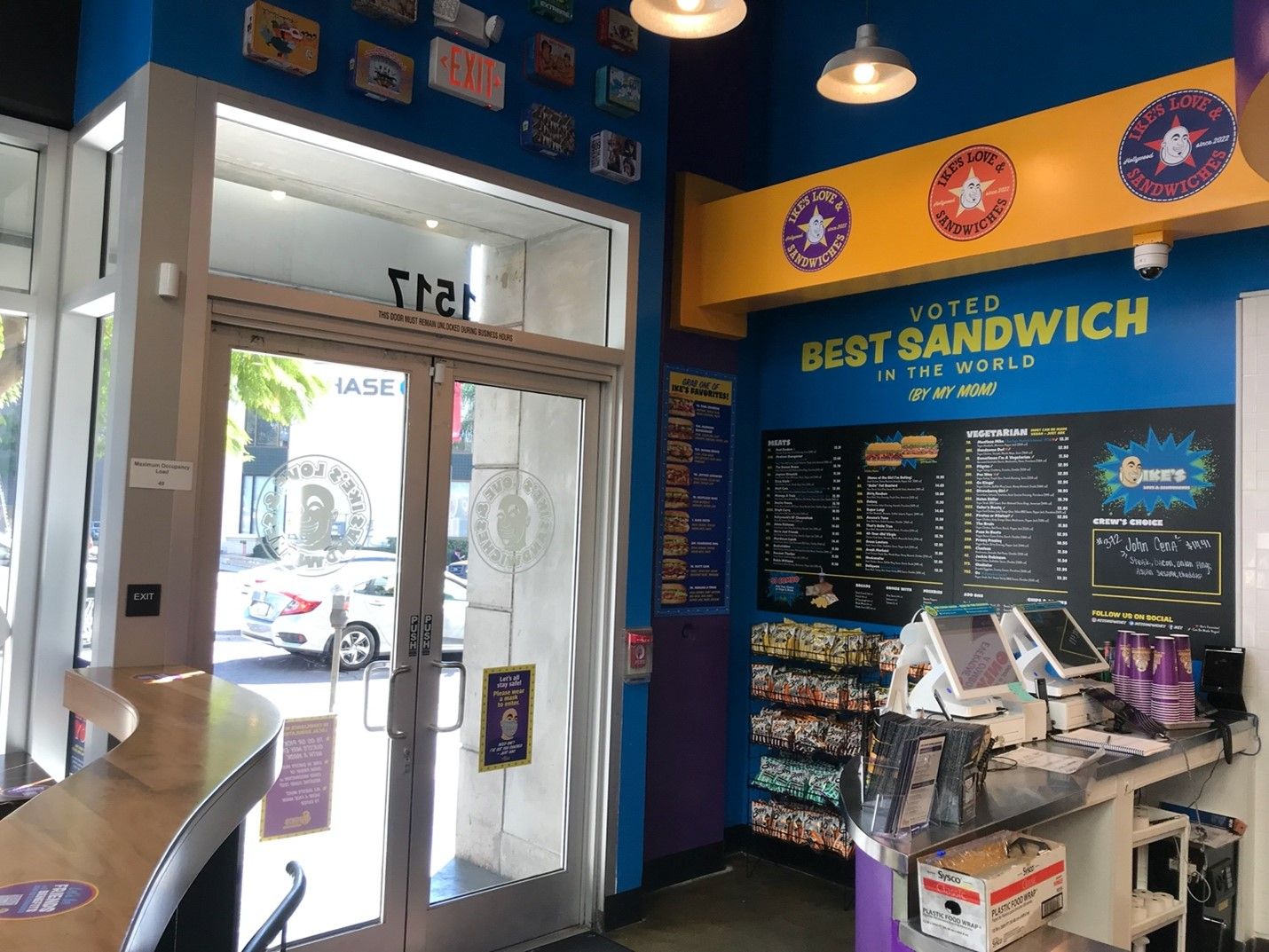 Ike’s Love & Sandwiches is a company that started as “Ike’s Place” in San Francisco in 2007. The fast-growing sandwich chain, founded by Ike Shehadeh, has a total of 80 locations on the company website. The word “love” precedes “sandwiches” because the founder believes in bringing people together over amazing food. Customers can watch as the sandwich artists prepare orders by hand from start to finish.

Taking over the space formerly occupied by Jersey Mike’s Subs, the Hollywood store had its grand opening on February 9, 2022. 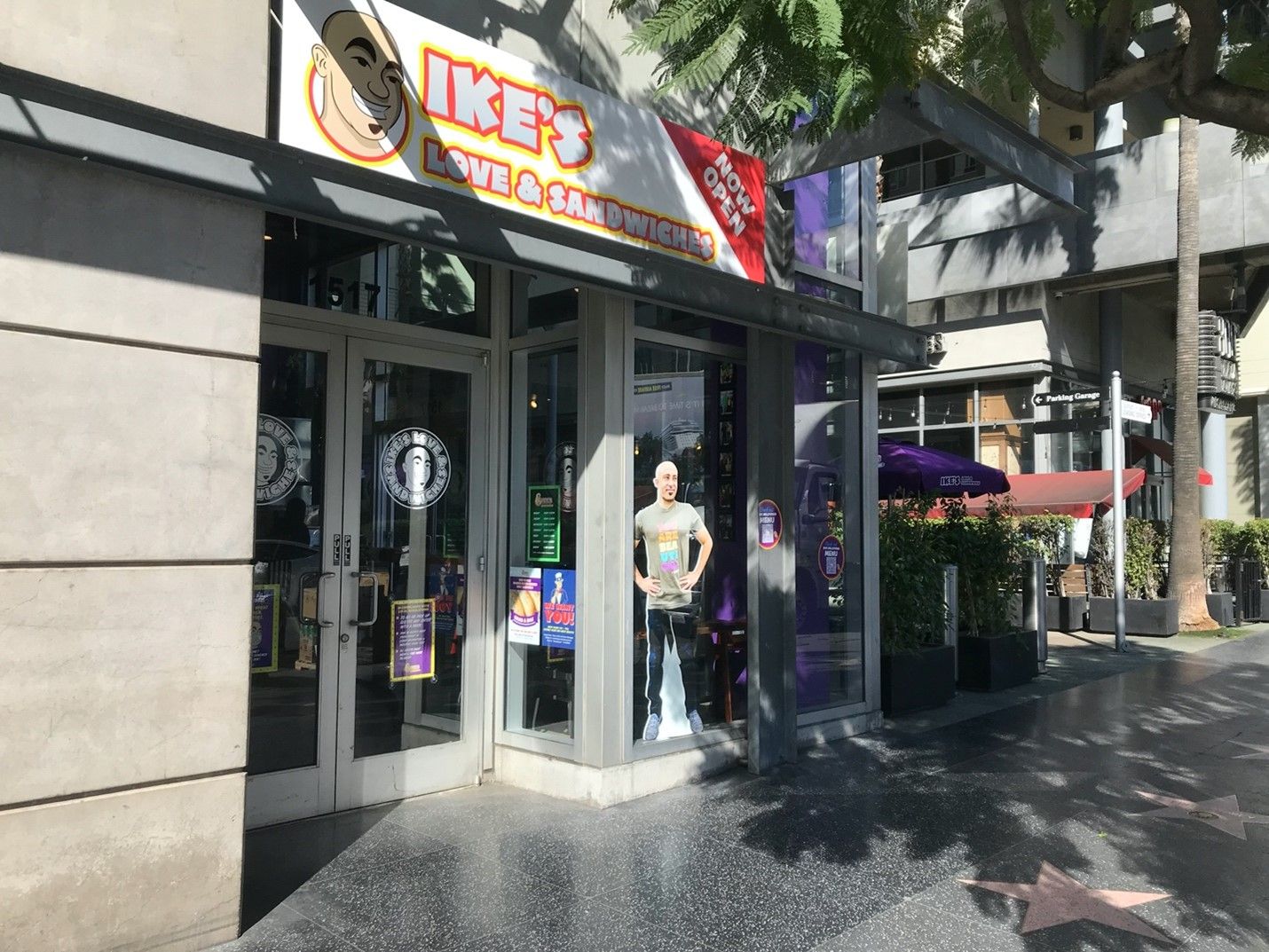 Ike’s Love & Sandwiches is located at 1517 Vine Street, Unit 107, which is close to the Montalbán Theatre. (Photo by Steven Herrera)

The storefront is adorned with temporary “now open” signage above the windows. There is an Ike standee behind the glass, and the company logo—a cartoonish image of the founder’s smiling face—is on each of the front doors.

The interior has a fun, creative vibe that pays tribute to Hollywood. The gold, blue, and purple painted walls are decorated with lunch boxes and photos of Ike with celebrities. Toward the ceiling, there is a mural depicting a film strip with cartoonish Ikes dressed as popular Hollywood characters. There is an indoor stand-up dining area, as well as outdoor patio seating adjacent to a breezeway. 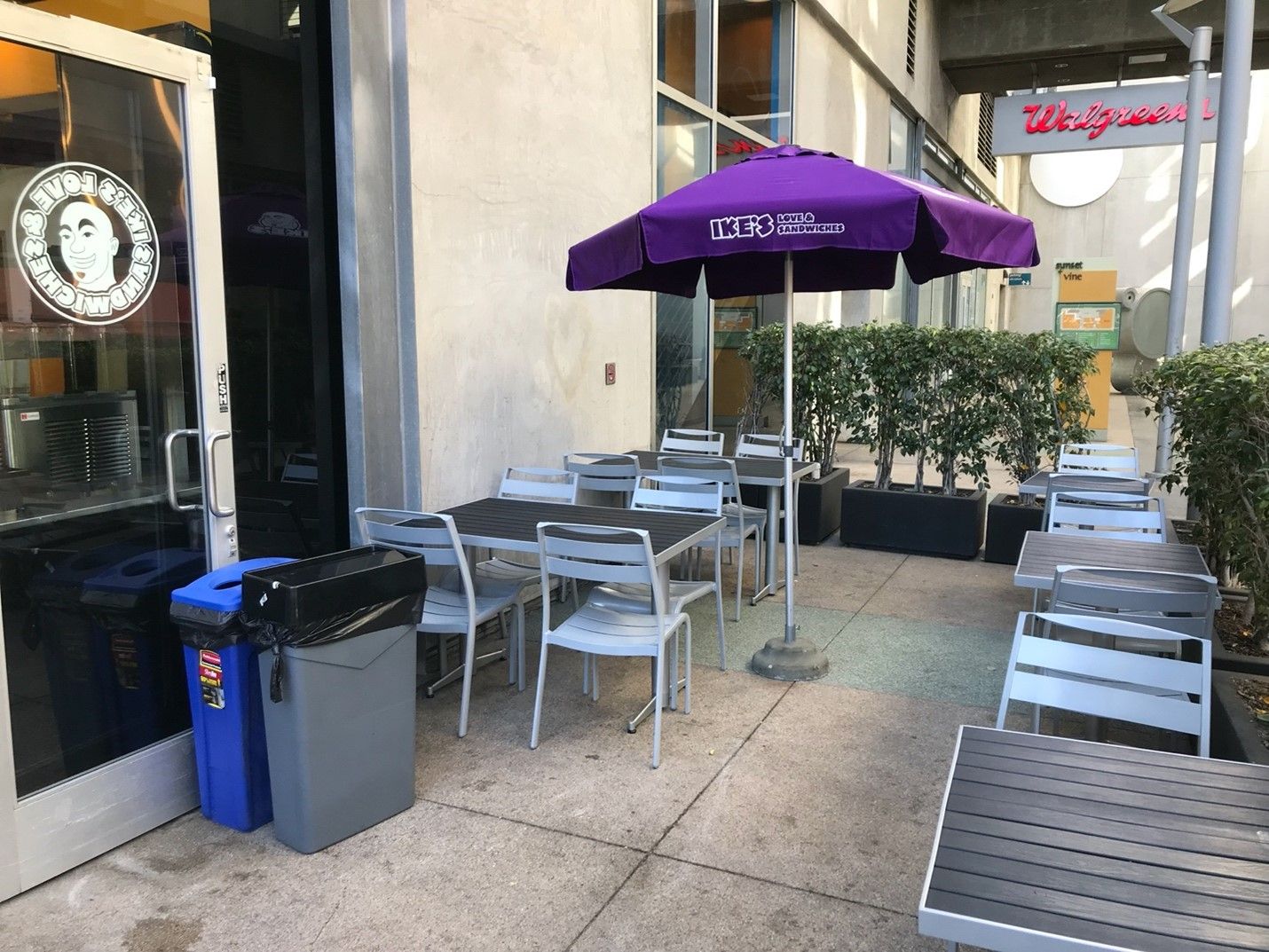 In addition to the indoor stand-up dining room, Ike’s Love & Sandwiches has outdoor seating on the patio. (Photo by Steven Herrera)

Ike’s offers over 800 sandwiches, all of which are available for in-store purchase. The menu at the Hollywood location lists twenty-eight for meat lovers, and seventeen for vegetarians. Menu items with heart icons are “Ike’s Favorites.”

One of the favorites under the “Meats” section is “91. Paul Reubens” ($13.31), which has pastrami, purple slaw, French dressing, and swiss. Another favorite is “111. Ménage À Trois” ($12.95), which includes halal chicken, honey mustard, BBQ sauce, real honey, pepper jack, swiss, and cheddar.

There are many options under the “Vegetarian” section, such as “61. Sometimes I’m a Vegetarian” ($11.50), which has marinated artichoke hearts, mushrooms, pesto, and provolone. Vegetarian sandwiches with carrot icons can be made vegan. A couple of favorites are “301. Handsome Owl” (vegan chicken, teriyaki, wasabi mayo, and swiss) and “291. Pee Wee” (vegan turkey, purple slaw, French dressing, and swiss), which are $12.95 each.

Ike’s is known for its “Dutch Crunch” bread, but “French,” “SF Sourdough,” or “Whole Wheat” can be substituted. “Gluten-Free” bread is available for an extra $2.00. All sandwiches are served hot with “dirty sauce” (house-made garlic aioli), lettuce, and tomato. Vegan dirty sauce is available. Banana peppers, jalapeños, pickles, and red onions can be added for no extra charge. A sandwich can be purchased as a combo with a choice of chips and a drink for an additional $3.00.

The following “Add Ons” are $3.50 each: beer-battered onion rings, fried zucchini, mozzarella sticks, and stuffed jalapeño poppers. Avocado and bacon are available for $2.00 each.

The four pre-packaged desserts, which are supplied by Sweet Street, include “Peruvian Chocolate Brownie,” “Brown Butter Marshmallow Bar,” “Salted Caramel Cookie,” and “Chocolate Chip Cookie.” The desserts are $2.95 each.

The Ike’s mobile app offers a convenient way to place an order for takeout or delivery.

Customers who join Ike’s Rewards can earn points toward free sandwiches, and are eligible for exclusive prizes and events.

Ike’s Love & Sandwiches puts a unique twist on the sandwich shop with its wide variety of options and branding featuring the face of the founder. The company differentiates itself through both the product and the experience. The new store embraces Hollywood and provides a source of specialty sandwiches to the neighborhood.