Larry Edmunds Bookshop: A Robust Survivor in the Brick and Mortar World

Right on Hollywood Blvd., the over 80-year old Larry Edmunds Bookshop is surviving in an industry increasingly impacted by e-commerce. With books, movie photographs, and posters, the store is the place to go for over 20,000 books and a collection of over 500,000 movie photographs. 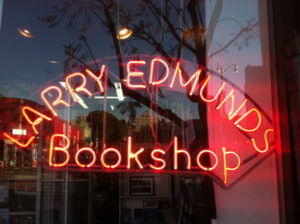 Owner Jeffrey Mantor says that the business started in 1938, and he personally began working at the store in 1991. He’s owned the store since 2007. He asserts “I would never want to do this business any place else. I think what we do belongs on Hollywood Boulevard.”  Larry Edmunds attracts tourists and locals as well as celebrity clients such as Quentin Tarantino, J.J. Abrams, John Landis, and Joe Dante.

Indeed, the store has continued under Mantor’s watch, although Hollywood predecessors such as Pickwick, Stanley Rose, and Hollywood Book & Poster have closed their doors.

Like Larry Edmunds, Pickwick opened on Hollywood Blvd. in 1938. Owned by Louis Epstein, the store was named after Charles Dickens’ classic The Pickwick Papers, and was a book lover’s haunt for movie stars, among others. In 1965, B. Dalton Book Seller, a Barnes & Noble subsidiary took over, but closed due to poor sales back in 1995.

The Stanley Rose Bookshop was named for its founder, and located next to Musso & Frank. Opened in 1935, despite being a gathering place for Hollywood writers including Rose’s close friend William Saroyen, the shop only lasted four years.

Hollywood Book and Poster was a late comer to the Hollywood book store scene, operating from 1977 to 2015. The shop was filled with scripts, posters, stills, and lobby cards.  Owner Eric Caidin, who was also the co-founder of the Grindhouse Film Festival, passed away the same year that the Hollywood Boulevard store closed.

But Larry Edmunds Bookshop has stayed relevant, in part from their adaptations to changes in the business climate over the years. Mantor no longer relies solely on the height of the tourist influx to Hollywood in the summer months, hosting in-store events and events at area movie theaters with signings, and appearances by celebrities and authors that appeal to the specialty audience that drives the business year-round. Mantor says “Our emphasis is on setting up a wide variety of events and activities.” 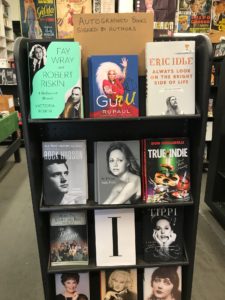 Along with offering in-store and store-linked events, Mantor describes his shop as “very much a resource for people who need anything on the subject matter of the entertainment industry.” The store carries vintage books, as well as brand-new books about the entertainment industry along with a fascinating collection of photographs and posters. “Whatever you are looking for, if it has to do with entertainment, we have it. You’ll probably stumble on a few surprises while you’re in the shop as well.”

Support from the local community is a crucial component of the Larry Edmunds Bookshop remaining on Hollywood Blvd. 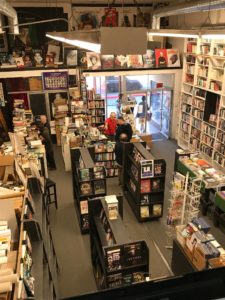 The store offers approximately four dozen different categories, but when it comes to fiction, carries screenplays only. “We carry biographies, books on directing, writing, and different kind of genre films from horror to SciFi. We also have books on television, acting, foreign films, film criticism, and so much more,” Mantor relates.

Supporting a Hollywood icon has never been easier.

April 2020 update from Jeff: Today however, like so many of our friends in Hollywood, be it tourism, filmmaking, stage or in the movie theatres, we are struggling. Our store is closed by order of the city of Los Angeles until the Covid-19 crisis subsides and our only income has been books that you order directly and that I have personally wrapped and shipped to you.
Certainly better than nothing, it is not enough to keep the store going. We are not meeting our basic operating expenses and I'm worried we won't be able to hang on.
I've followed  directions for receiving aid, but as so many small businesses are learning this a slow and unpredictable process. My own bank told me to get in line for a "possible" loan. I have applied for a grant and will apply for more, but even that help (if it is approved) is going to take time and will only be supplemental.

To support Larry Edmunds Bookshop during the COVID-19 pandemic, please consider donating to their GoFundMe. Thank you!