Today in Hollywood, the Los Angeles County Metropolitan Transportation Authority - better known as Metro - announced the expansion of the popular Metro Bike Share Program in the Hollywood area with twelve new bike stations. Joined by LADOT and the City of Los Angeles, officials from Metro were on hand to conduct a ribbon-cutting ceremony for the new Hollywood Metro Bike Share Stations. 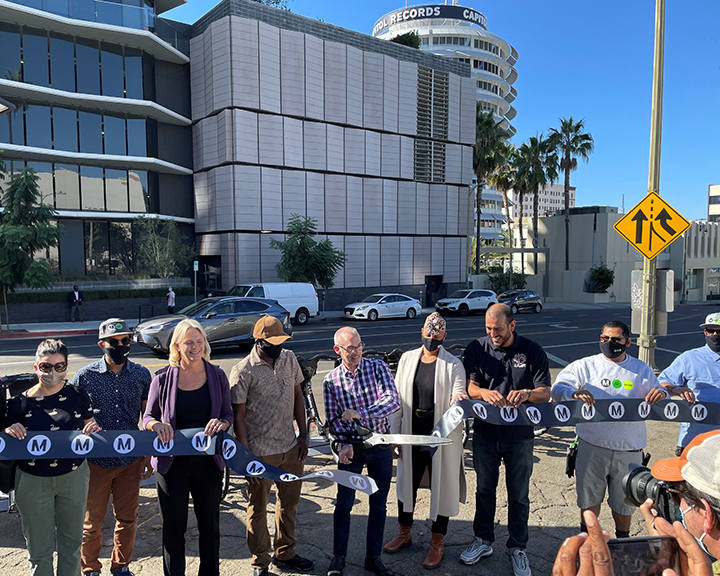 The ribbon cutting for the expansion of the Metro Bike Share Program in Hollywood was held at Argyle and Yucca in Hollywood on October 15, 2021. (Photo by Devin Strecker)

"With this expansion, Metro Bike Share will now go as far west as Runyon Canyon, as far north as the Hollywood Hills, and south to Santa Monica Blvd.," Rockwell said. "Hollywood Bike Share customers will be able to connect to existing services in East Hollywood, Los Feliz, and Silverlake. It will provide great access from the B line, formerly the Red Line, to residents and businesses throughout Hollywood." 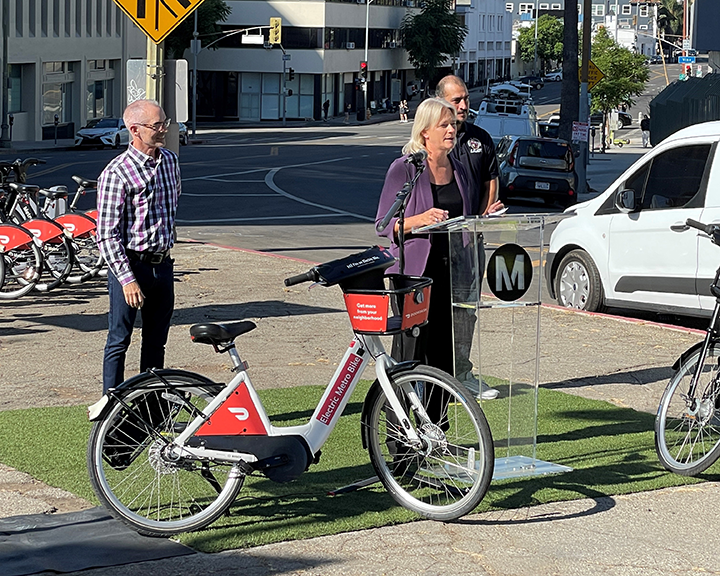 The new stations are located at Franklin and Fuller, Highland and Sunset, Hawthorne and Orange, Fountain and Vine, McCadden and Santa Monica, Yucca and Argyle, and six along Hollywood Boulevard at the intersections of Highland, McCadden, Cherokee, Whitley, Ivar, and Vine. The locations were selected based on community feedback and consultation with the City of Los Angeles. Station locations and availability can be found at bikeshare.metro.net or on the LA Metro Bike Share app.

"Bike Share continues to be one of Metro and the City of Los Angeles' key initiatives," Rockwell said. "The benefits are significant. They provide a first/last mile connection, they reduce car trips, and most importantly, they provide a healthy and affordable mobility option. As we all continue to recover from Covid-19, Bike Share provides a healthy, socially-distanced mobility option.

The expansion brings Los Angeles to 220 Metro Bike Share stations throughout Los Angeles. The program is one of the most affordable options in the country, with bikes renting for $1.75 for the first 30 minutes or $5 for an all-day pass. A year-long sponsorship deal with Doordash helps offset the cost of the program. 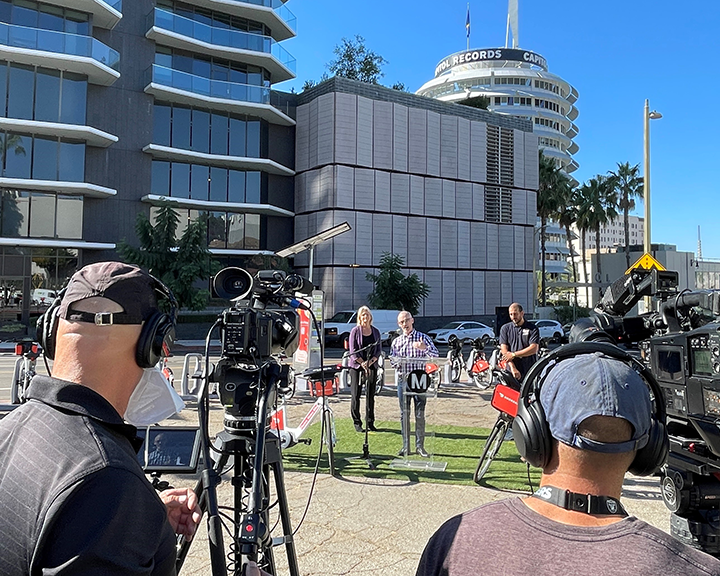 Councilmember Mitch O'Farrell lauded the Metro Bike Share program for its impact on climate change by providing a carbon neutral way of navigating the city. (Photo by Devin Strecker)

"Hollywood is such a bikeable community, and I know this because when I lived in Hollywood thirty-nine years ago, for two years, my mode of transportation was the bicycle," Councilmember Mitch O'Farrell said. "I'm so pleased that in this role, all these years later, with that lived experience and knowledge, that I have the opportunity and the privilege to play a role in helping to bring this bike share program to Hollywood."

As the first transit-led public bike share program in the country, it connects the transit services the Metro offers regionally with local implementation of the bike share. The system includes both classic and electric bikes. 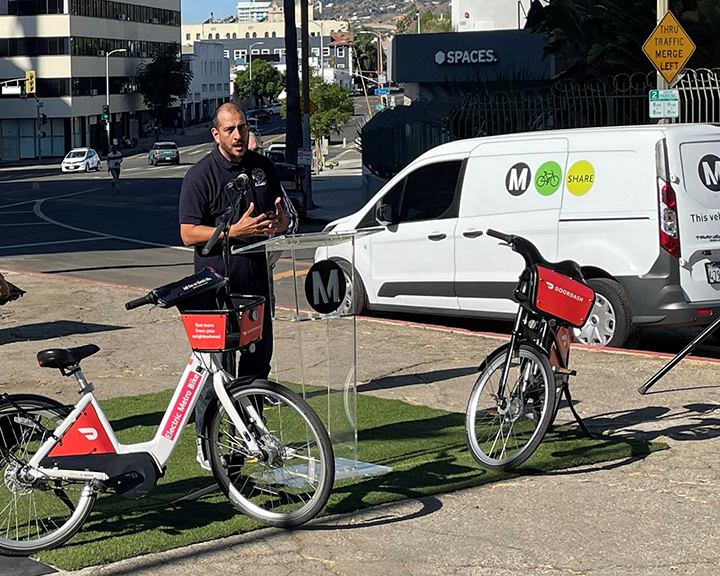 Marcel Porras, LADOT's Chief Sustainability Office, credited Metro's bike share program for continuing to offer options for Angelenos to get around during the Covid-19 pandemic.

"Bringing these electric bikes is really going to help make sure that we have more accessibility for older adults, women, and folks who might not really feel comfortable riding the classic [bikes]," Porras said.

"Hollywood is sold every night on TV," Porras added. "To have these stations here, not just for Angelenos, but people who come and visit will see - 'wow, I thought LA was a car city' - we're proving them wrong."

The Los Angeles County Metropolitan Transportation Authority (Metro) is currently providing lifeline service for essential trips and frontline workers. Metro continues building the most ambitious transportation infrastructure program in the United States and is working to greatly improve mobility through its Vision 2028 Plan.

Metro has proudly pledged to the American Public Transportation Association (APTA) Health and Safety Commitment Program to help ensure the safe return of transit riders as the U.S. recovers from the  COVID-19 pandemic.