Need a Little Elbow Room? Hollywood Hangout Has Some to Spare

If you need a little elbow room, then head on over to Cahuenga Corridor and the new Elbow Room restaurant. This congenial establishment replaced the former Birch Restaurant, which provided a different atmosphere entirely. Elbow Room could be considered ¾ bar to ¼ restaurant – with food, or a cool pizzeria – with a great drink menu. 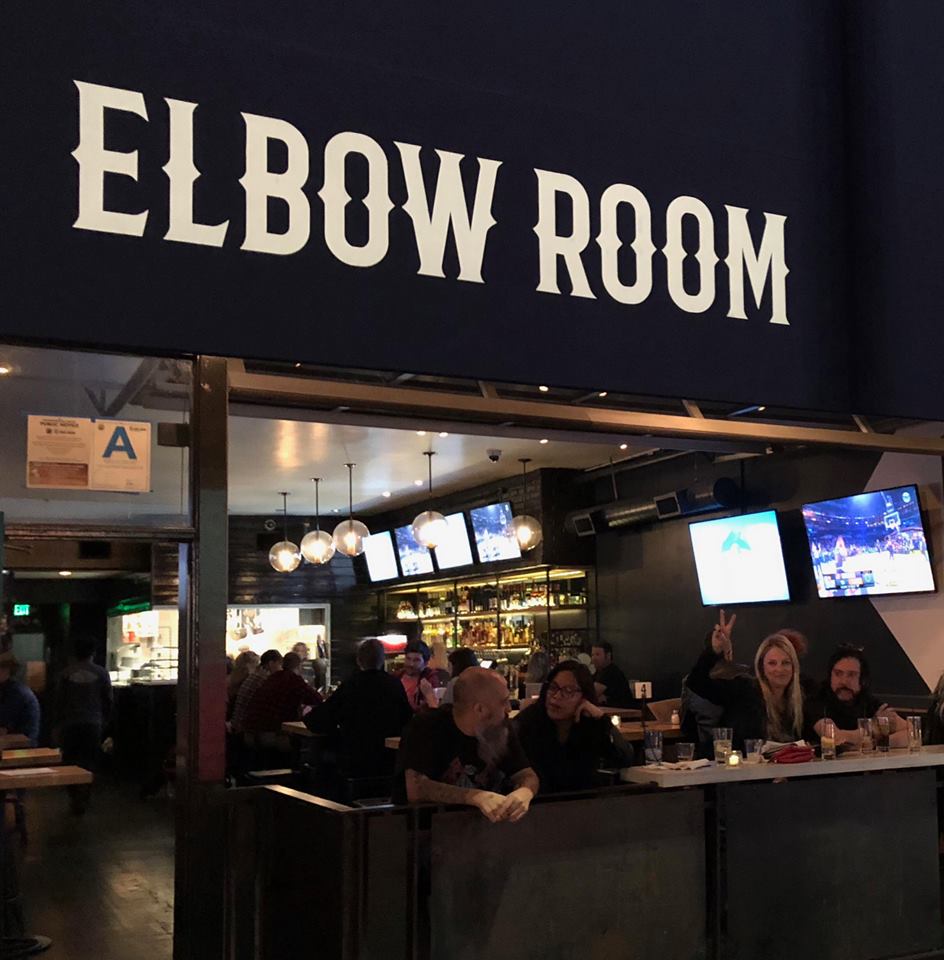 Most guests find themselves standing, but not minding that at all with tasty, upscale bar food, extensive happy hour timing, and flat screens tuned to sports along the walls. Despite its recent opening, Elbow Room already appears to be thriving, bolstered by the draw for sports fans looking for a wide range of brews and an appealing set of eats.

The restaurant calls itself #TheNewLocals, presenting itself as a kind of trendy version of Cheers with craft cocktails and beers. Their pizzas are a mainstay, and the vibe is definitely gastropub versus dive bar. The pizzas can be ordered whole or by the slice, which is a pretty appealing option, particularly if you’re coming in yourself to catch a game or just unwind after work. 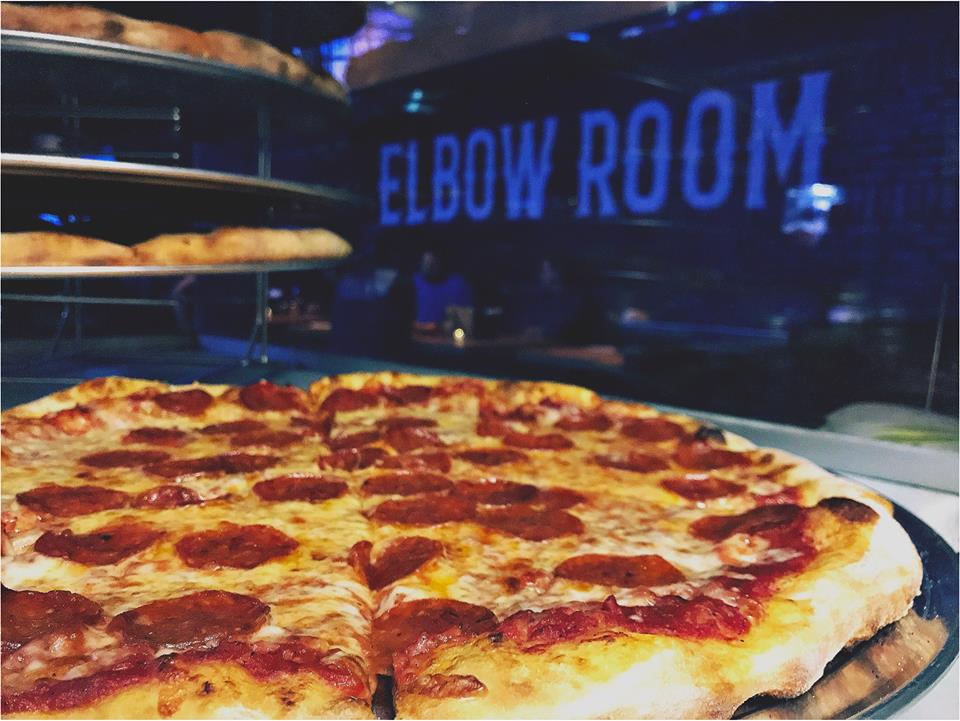 Pizza is one of the menu highlights at Elbow Room in Hollywood. (Courtesy photo)

Choose from a nicely crisp cheese pizza, make your own, or go for the OG which is cheesy pepperoni. There are less classic offerings too, such as Scampi Pizza with shrimp, olive, oil, garlic, tomatoes and basil, and the Buffalo Pizza, a nicely spicy blend of garlic buffalo sauce, chopped tomatoes, red onions, blue cheese, chicken, and mozzarella cheese. There’s a ricotta meatball pizza, too.

Taking a look at the menu, not only are pizzas among the most plentiful offerings, servers say they are the most popular.

Trending drinks include the Tropic Thunder, a very LA sort of drink with mescal, pineapple honey, simple syrup and basil oil. The house Old Fashioned is also a choice with plenty of appeal, and has a somewhat unique twist with Rye, Amaro, and Beneticitia as well as cherry bitters and the classic orange rind. When it comes to beer, the drafts include local favorites such as Golden Road Hef and international brews like the Italian Peroni. Looking for a bargain brew? Bud on draft is just $5. 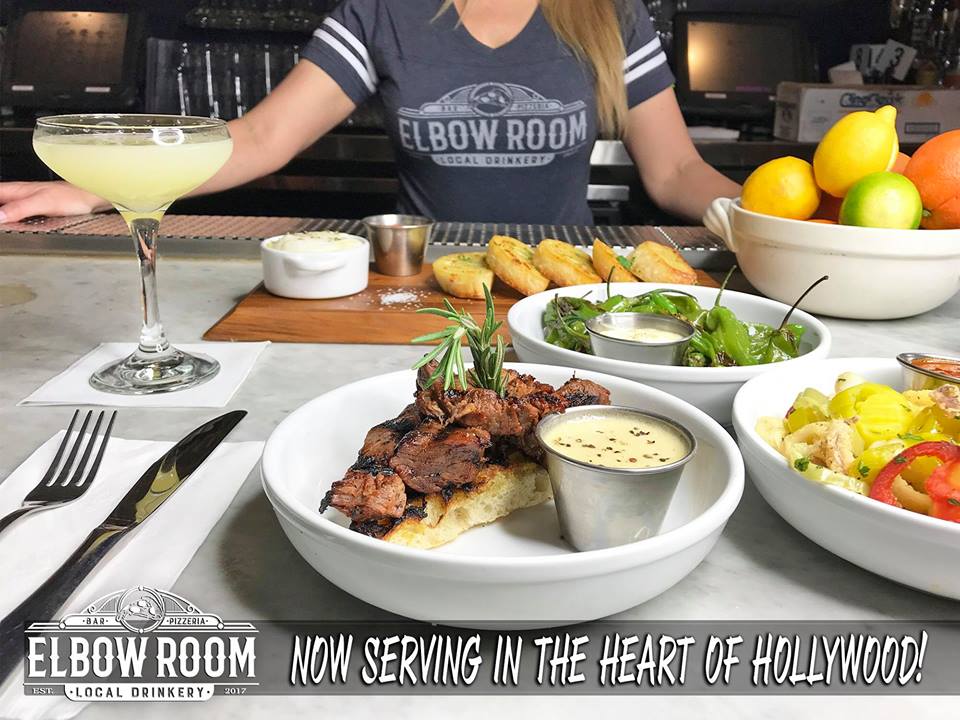 A range of menu options are available at Elbow Room in Hollywood. (Courtesy photo)

If pizza and a drink isn’t your thing – but these do seem to be many diners’ choice at this convivial spot – then there are salads such as a Caesar, an Italian chopped, and an arugula salad with pine nuts and prosciutto served with a tangy lemon vinaigrette dressing. There are also what the menu calls “Bites” with a truffle mac n’ cheese, roasted shishito peppers, and garlic fries on the list. Heartier appetites can enjoy marinated tenderloin steak tips or perhaps a nicely fried and baked eggplant parm. Paninis are also a house specialty, each served with a side arugula salad. There’s the Elbow Caprese panini with prosciutto, pesto, burrata, basil, and tomatoes; an eggplant panini which adds feta cheese; and even a burger panini in case you’d prefer a crisply toasted ciabatta bread to a bun.

And if you don’t want to dine in, you can order to go – and even order online. The restaurant is a part of the “Slice Family,” a pizzeria partnership that allows cutting edge technology for ordering and helps to create a strong online presence, both of which, judging by the crowds packing Elbow Room for March Madness, are working well for this appealing newcomer.