In the next two months, I am scheduled to deliver at least four talks in which I will share what I am learning about people who are homeless and suffer from severe mental illness in our city. As I gather my thoughts, I realize I am remiss in not updating the blog post I wrote in July 2014 about Hollywood’s Top 14 – those individuals who are chronically homeless and suffer from severe mental illness.

The woman who lies on the mattress on Whitley (the illustration for the original blog post) now lives in a board & care home on Western Avenue. Three people from the original Top 14 list passed away; two on the streets of Hollywood, one in a hospital.  One individual, prone to violent outbursts, attacked a woman on Cahuenga last year and ended up in jail.  He is charged with felony criminal threats and will be standing trial this spring.

Six on the list have been treated. Our intrepid little coalition has been able to make the case to psychiatrists and judges that these six individuals were “gravely disabled” and needed to be conserved, in order to facilitate their safety and ensure treatment. We continue to follow these people through the system, as after the conservancy is lifted, they move to a board and care home, in most instances.

So, thanks to the Durfee Foundation, I am on a two year journey (having been awarded a Stanton Fellowship) to try to make sense of this world and find a path forward where my voice, or new ideas, or the stories I am collecting, or a policy stance, can be impactful.

Here I am four months into this journey, and I have decided to play the provocateur to grab people’s attention. In no uncertain terms, may I join the chorus of voices who assert that this system is completely and utterly broken?

Here are 10 observations I hold as of today and if anyone wants to argue to the contrary, I WELCOME evidence to support a different point of view:

Now, as to the photo that illustrates this blog post. Some might consider it insensitive to place a photo of a deceased man to make a point. As it turns out, he was not deceased, though his appearance led us to call 911 to have the paramedics come check him out. What you will learn may bother you, but it speaks to the requirements guiding our paramedics today. When they arrived, they were able to rouse him. They asked his name.

“Where are you from, Gerard?”

“Do you need assistance?”

“No,” was his answer. He propped himself against a wall and he was left to his own devices.

In my heart of hearts, I know he did not last much longer. My heart aches because I envision what could have been: Gerard living somewhere, taking the medication which allows his brain to function more like yours and mine, having showered and enjoying the satisfaction of a full stomach. Looking forward to a clean pillow on which to lay his head.

I only wish Gerard could’ve stayed long enough in Hollywood to enter the safety net of the Top 14 list. We don’t give up. 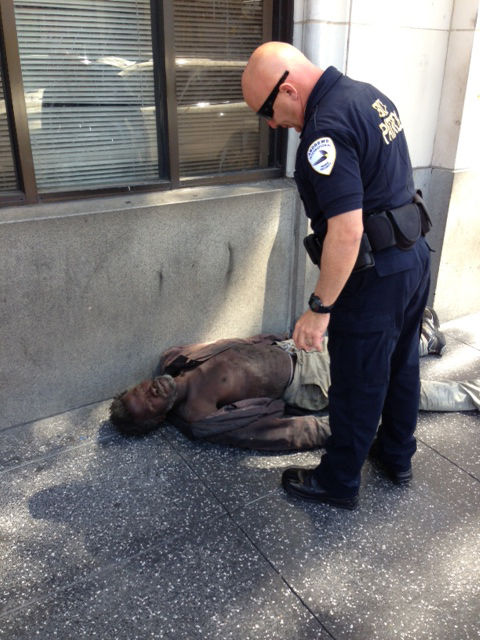 Gerard as he was found on the sidewalk. 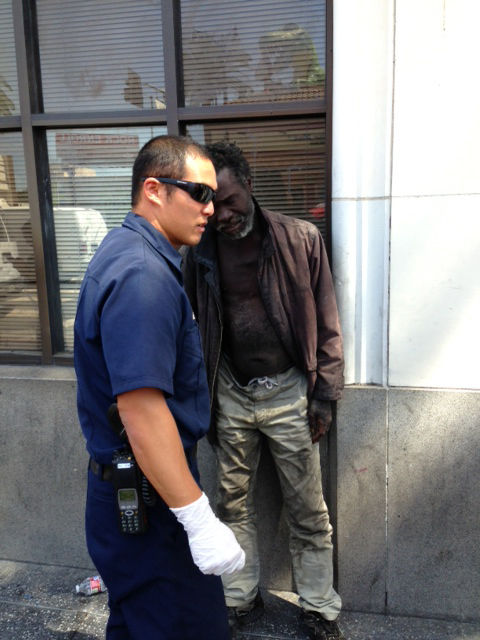 Gerard after refusing help from paramedics.

Kerry Morrison is the founder and project director of Heart Forward LA. She is the former executive director of the Hollywood Property Owners Alliance and served as a Mayoral appointee to the Los Angeles Homeless Services Authority (LAHSA).