The Paleta Bar is a unique frozen treats shop that will open soon on Hollywood Boulevard, just west of Highland Avenue. It is located on the ground floor of a historic, three-story building near El Capitan Theatre. The sliding glass doors of the storefront are covered with temporary signage featuring colorful images of the products. The building has an interesting past and has undergone significant adaptations to meet the needs of the new tenant.

The mixed-use structure at 6806 Hollywood Boulevard was originally the Bonnie Brier hotel. The stucco building, which has Art Deco ornamentation, was constructed in 1922. There were two-stories and 36 guest rooms in 1926. The building later increased to four-stories, including a mezzanine level, and had 86 guest rooms by 1944.

In 1983, Mazen Nazzal, an immigrant who had been in the hotel business in Lebanon, invested in the property with a business partner. Eight years ago, the Nazzal family bought out the partner because the two sides did not see eye-to-eye on the future of the property.

When the Nazzal family gained full ownership, the three-story building had retail on the first floor and the Walk of Fame Hostel on the second and third floors. Mazen’s three sons, Michael, George, and Farris, ran the hostel for five years. The family later sold the hostel to a new operator, Samesun, which owns five hostels in California and four in Canada. 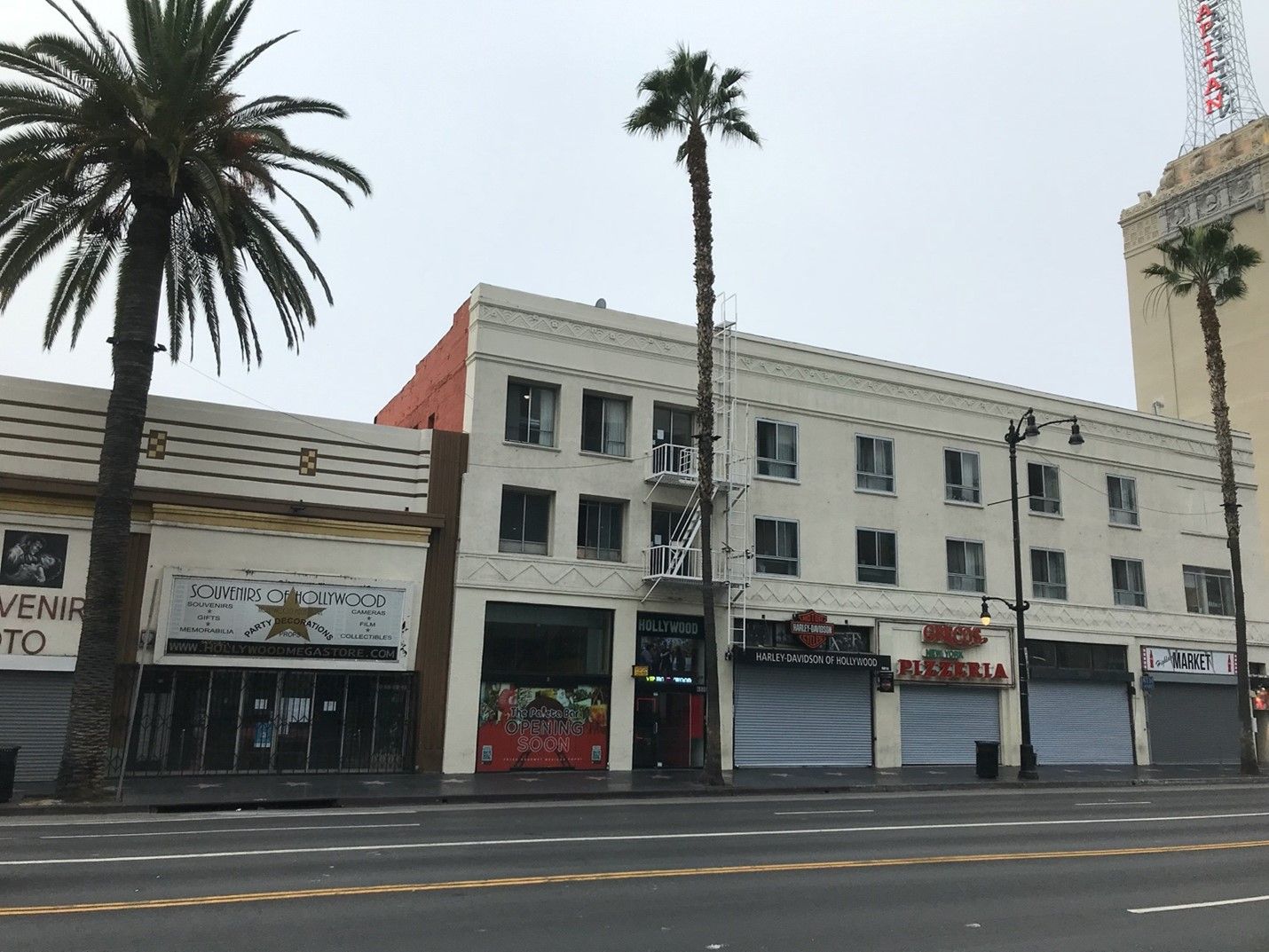 The three-story building at 6806 Hollywood Boulevard has retail on the ground floor and a hostel on the second and third floors. (Photo by Steven Herrera)

The previous tenant of the space at 6806 Hollywood Boulevard was LA City Tours. After the tour office closed, the space reverted to the owner. Michael Nazzal is the property manager of 6800 to 6822 Hollywood Boulevard, and is part owner. There was an offer from a quick service restaurant tenant, but Nazzal declined as he believed tourists would not have been impressed. “I wanted something unique to Southern California,” he said. “The Paleta Bar has Mexican American roots.”

The Paleta Bar is an Albuquerque-based company that offers authentic gourmet Mexican ice pops, along with premium dips and toppings. There are a total of 27 locations on the company website. The Hollywood location is a corporate store, and will open in January 2022, or sooner.

A lease agreement was signed in October 2020. The Paleta Bar had to get a Conditional Use Permit (CUP) from the city in order to convert the space from a tourism business to a food business. It took eight months to obtain the CUP.

After the CUP was issued in August 2021, the attention turned to The Paleta Bar’s requirements for the space in terms of infrastructure. This included plumbing, electrical, and HVAC. 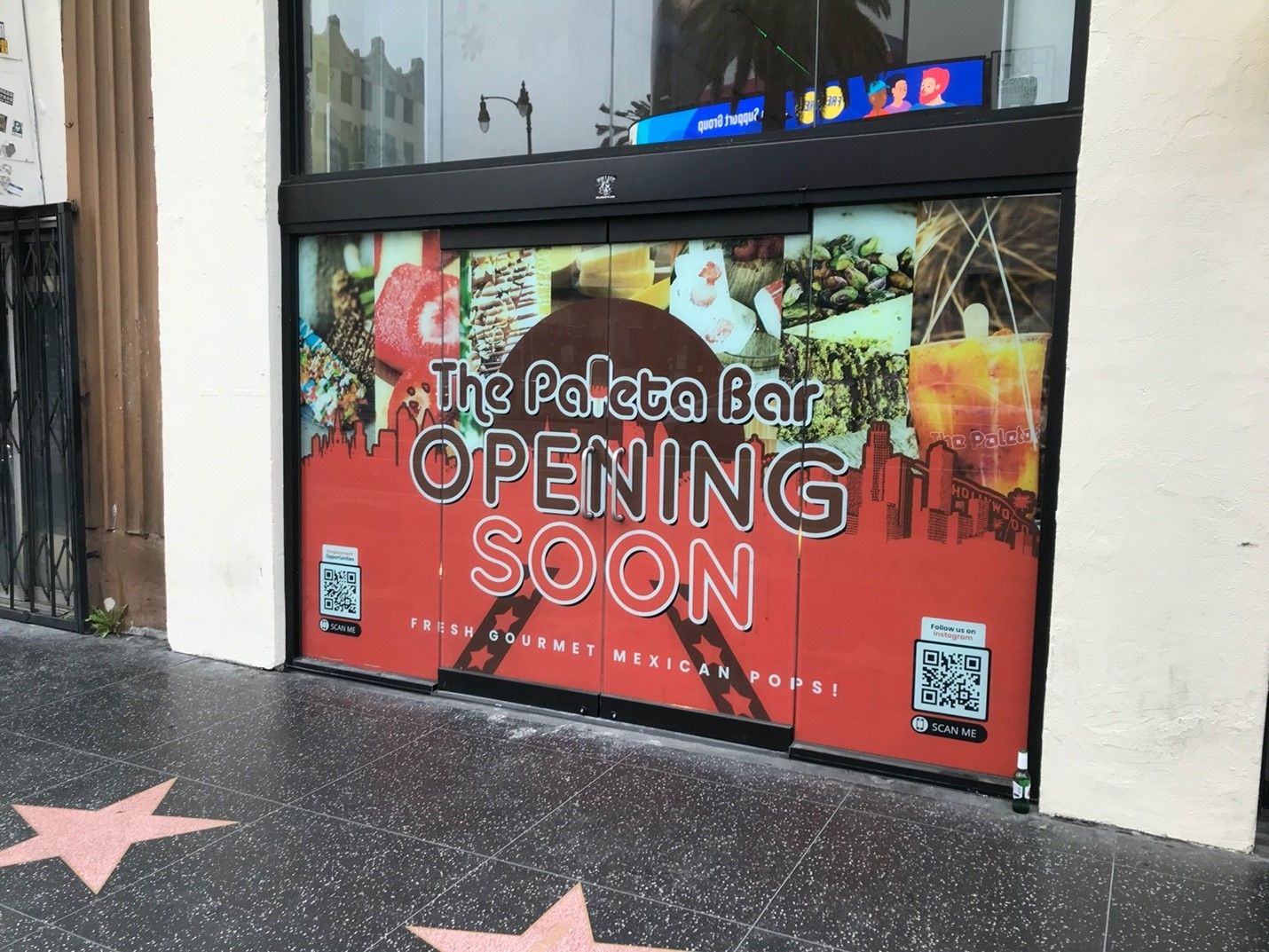 The Paleta Bar is located at 6806 Hollywood Boulevard, which is adjacent to Souvenirs of Hollywood. (Photo by Steven Herrera)

Construction began at the end of September 2021. Installing the kitchen required major plumbing work to bring water in from the basement. Furthermore, the electrical infrastructure needed significant upgrades to support the power requirements. The ice cream maker, freezer, and refrigeration unit required the electrical service to be upgraded to 200 amps.

Other work involved building the storefront and installing a new HVAC system. Installation of new flooring and fixtures was also part of the buildup.

The Paleta Bar Hollywood menu will be similar to that of other locations. But one of the store managers indicated that there are plans to add gluten-free and vegan products.

A colorful mural was recently put up on the back of the building adjacent to The Paleta Bar. Because of its location at the famous intersection of Hollywood Boulevard and Highland Avenue, the mural will be seen by people from all over the world. There were many stakeholders involved in creating the mural on the historic, two-story building on the south-west corner. 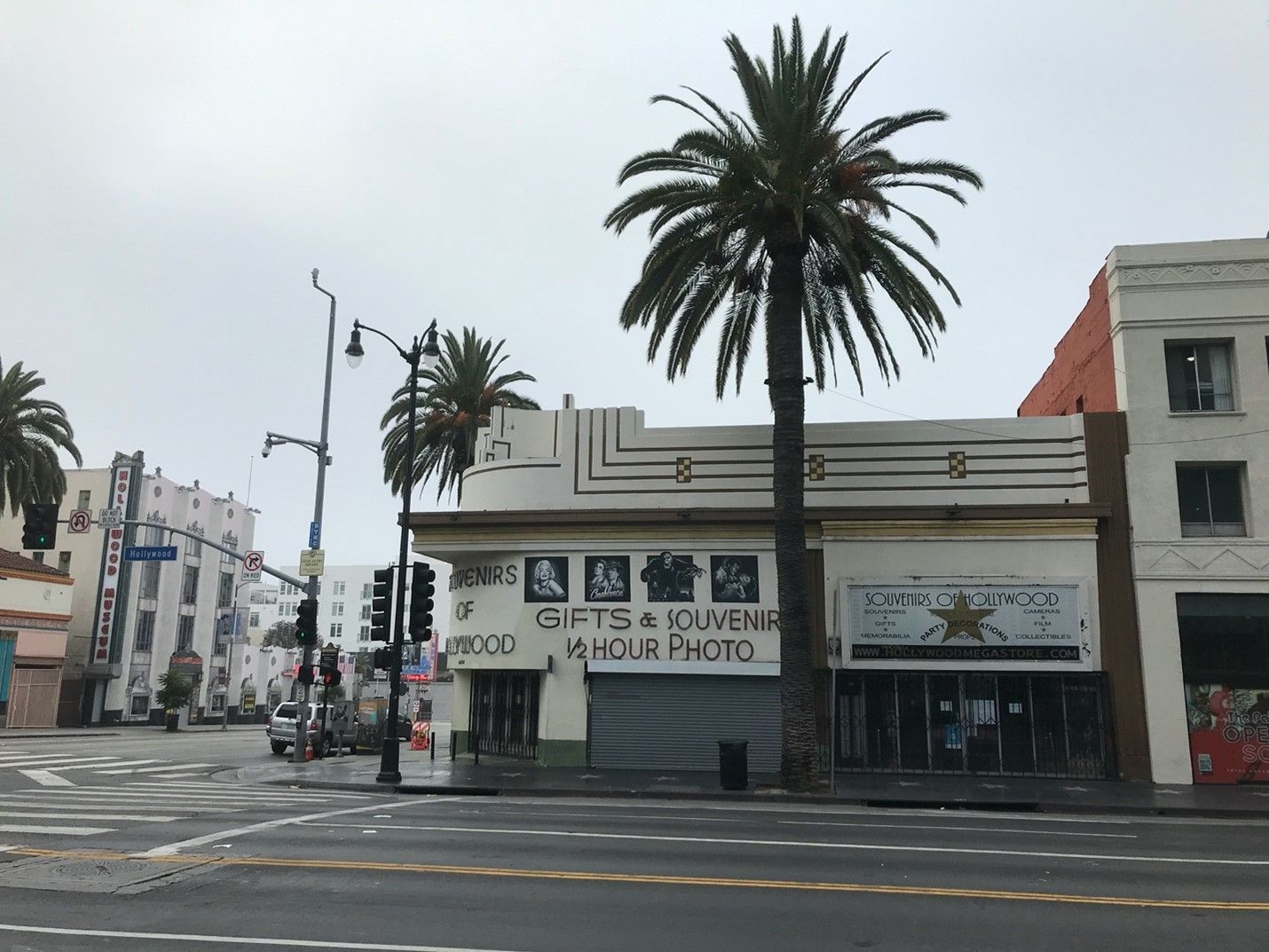 The mural is on the back of the building at 6800 Hollywood Boulevard, which is occupied by Souvenirs of Hollywood. (Photo by Steven Herrera)

The retail structure at 6800 Hollywood Boulevard is the former Lee Drug building, constructed in 1935. The concrete building combines Art Deco and Streamline Moderne architectural elements. A prior owner extended the back end of the first floor by 22 feet in 1959.

When the two walls on the back of the building were blank, an artist proposed a mural depicting classic Hollywood stars such as Charley Chaplin, Laurel and Hardy, and Marilyn Monroe. But Nazzal turned down the proposal because he felt that the idea was cliché.

Nazzal found a concept that appealed to him when Alexandra Nechita, an artist with whom he has a professional relationship, proposed her Set The Stage mural. Nechita has over 30 years of experience as an artist. Her work is displayed in iconic locations such as the Vatican Collection in Rome and The Rock and Roll Hall of Fame.

Arts Bridging the Gap (ABG)—in tandem with the Hollywood Partnership—organized the mural project. Nazzal reached out to ABG after seeing other art projects around Hollywood that had been sponsored by the non-profit social justice organization. ABG connects youth from under-resourced communities to art programs. 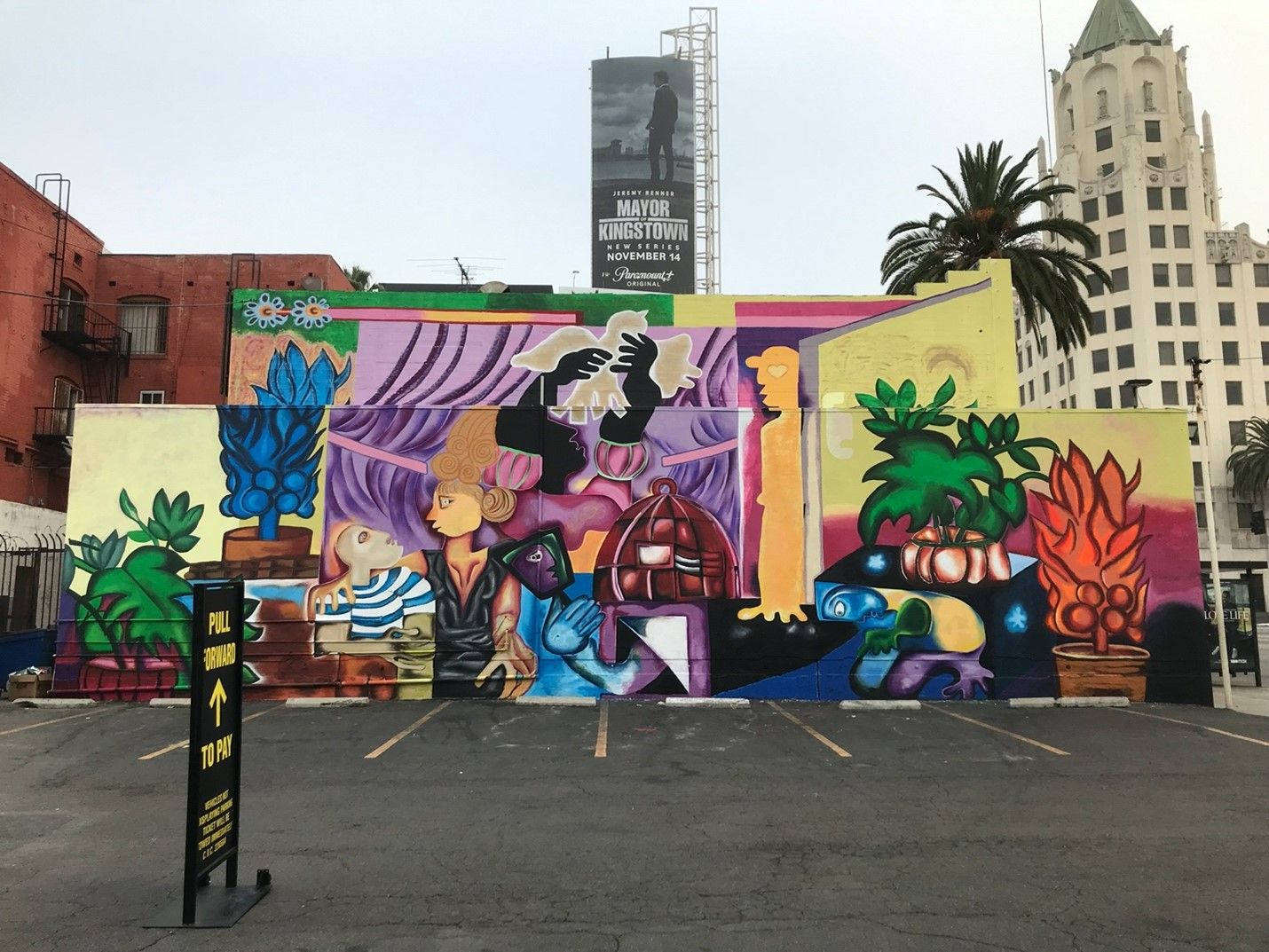 To estimate the amount of paint needed, Nazzal paid an architect to visit the property and determine the exact dimensions of the two walls using a laser measuring tool. The information was provided to a drafting person to create a drawing. The wall on the bottom is about 60 feet wide by 16 feet high, and the wall on the top is about 52 feet wide by 15 feet high.

It took eight months for the project to go from the planning stage to production. On the night of October 21, a projector was used to project an image of the mural on the wall, while an outline of the image was drawn. The next morning, Nechita began painting from top to bottom. She worked with other volunteer artists and children from ABG to put up the mural.

Nazzal is proud of the collaborative process that took place to make the mural happen. “It has brought an interesting work of art to the building,” he said. “It brings a smile to my face when people stop and look at it and judge it.” This art project took some time and involved many stakeholders. But the effort was worth it as the colorful mural beautifies the neighborhood.