Unlocking the secrets of the Hollywood Legion Stadium

The American Legion Post 43 members, many of whom were in the entertainment business, first built the Hollywood Legion Stadium, located at 1628 El Centro Avenue, just south of Hollywood Boulevard, in 1919 as an open-air stadium. They wanted a local stadium so they wouldn’t have to travel to the LA Stadium for boxing matches. A roof was added in 1921 and in 1938 it was re-modeled into a 6,000-seat arena.

In its heyday, Hollywood (American) Legion Stadium was one of the two major boxing venues of Los Angeles from the 1920s on, the other being the Olympic Auditorium. It was the most stable and most successful venue in California during the 1920s and 1930s. Its cards were held on Fridays. It opened as an 8,000-seat venue August 12, 1921, under the auspices of World War I veterans. It was closed for a short time to add an arched roof over the formerly open-air venue, and reopened Dec. 16, 1921. It once again was closed briefly on July 11, 1923, to sink the boxing ring six feet, increasing the pitch of ringside seats so that all patrons had a good view of the ring, and to add a ventilation system that recycled the air every 10 minutes. According to the Los Angeles Times of the day, the venue then accommodated 5,100 people. (Other sources say the seating was reduced to 4,500.) A second version of this venue opened in late 1938 with a capacity of about 6,300. Black boxers were not allowed to fight here until 1940. 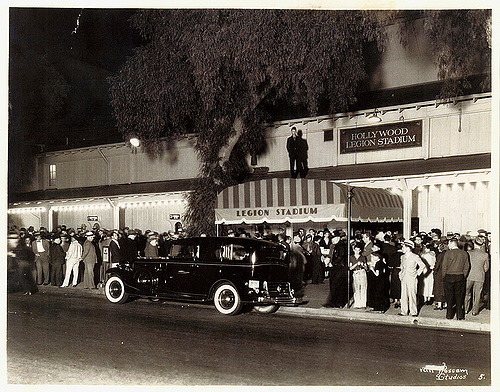 On March 15, 1952, shows moved from the regular Friday night slot to Saturday nights. The reason for the move was the televising of boxing shows from the East Coast on Friday nights, which had eroded attendance and made sell-outs rare. With the move, the Legion Stadium intended to televise their shows as well, showing them locally on television station KECA. 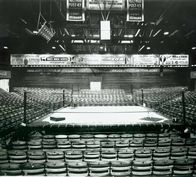 Back in the 1920s, 30s and 40s, the stadium became a favorite hangout of film celebrities when Hollywood really was Tinseltown. Then, when you went to the fights or wrestling matches at the Legion, you didn't know whether to watch those in the ring or the movie stars in the seats around it. In the era of Friday night boxing matches, when fans mingled with the star-studded ringside set at the Legion Stadium, you probably would have seen Rudolph Valentino, Douglas Fairbanks and Charlie Chaplin, who would study the boxer's techniques to adapt them to his screen work.

Then in later years, the Ritz and Marx brothers were usually on hand, along with Bob Hope, Tony Curtis, Dean Martin, George Raft, Clark Gable, Humphrey Bogart, Errol Flynn, Lupe Velez, and Mae West, who was known to give wristwatches to her favorite fighters. Al Jolson, a part-owner of world welterweight champion Henry Armstrong's contract, also was a front-row regular with wife Ruby Keeler.

Film stars would come to have drinks after watching a fight at the Hollywood Legion Stadium. “We never knew who was going to be in the audience during our wrestling matches there,” says former wrestling champion Hank Garrett. “Sometimes the other wrestlers would come back stage and report who was sitting out front that evening. Years later when I met Tony Curtis at an autograph show he said to me, ‘You look so familiar, aside from your being the Killer Mailman in Three Days of the Condor.  I know you from someplace else.’ ‘Tony,' I replied, ‘you were in the audience one night when I was wrestling at the Hollywood Legion Stadium.’ He leaned over and said, ‘How come a Jew became a pro-wrestler and a CIA killer in a movie?’  I replied, ‘It’s the good fortune of being raised in Harlem!”  We both laughed.” 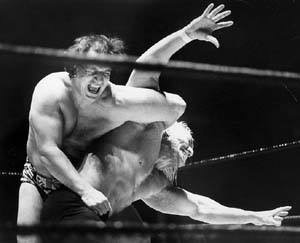 Garrett began powerlifting, bodybuilding and karate as a means of self-protection in a rough neighborhood, starting at age 13. He was the 1958 winner of the Junior Olympic Powerlifting competition. This led to an extended stint (1957-1966) in professional wrestling under the name of The Minnesota Farm Boy. “I must have been among the last to wrestle there because the stadium was sold soon after and transformed into a bowling alley,” says Garrett. 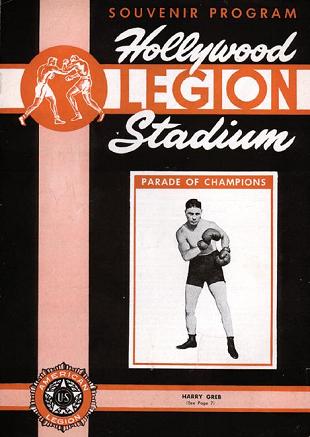 After a final boxing card on September 12, 1959 and a wrestling bill two nights later, the stadium indeed went down for its final count when it ceased being a fight and wrestling palace. Then in the 1980s it had a third act as fitness gym when Holiday Spa Clubs injected $11-million into its rejuvenation. With its original outer shell and trusses still intact, it was the largest single historical retention project in Hollywood's 100-year history at the time. To be sure, it was a solemn farewell as old-time boxers and wrestlers gathered for the closing of the Hollywood Legion Lanes, formerly Hollywood Legion Stadium where, for four decades, so many of them had fought and wrestled their way through professional careers.

For them, the enduring memory is one of camaraderie. “We were on the road traveling together to the next booking, sometimes all squeezed into a single car because we couldn't generally afford to fly,” recalls Garrett. “We ate together, and we stayed at the same inexpensive hotels. We may have only been a step away from poverty but in the wrestling world we honored each other’s ability and experience as if there was an unwritten code that we lived by. In short, we shared the experiences with each other as you would with a family member.” 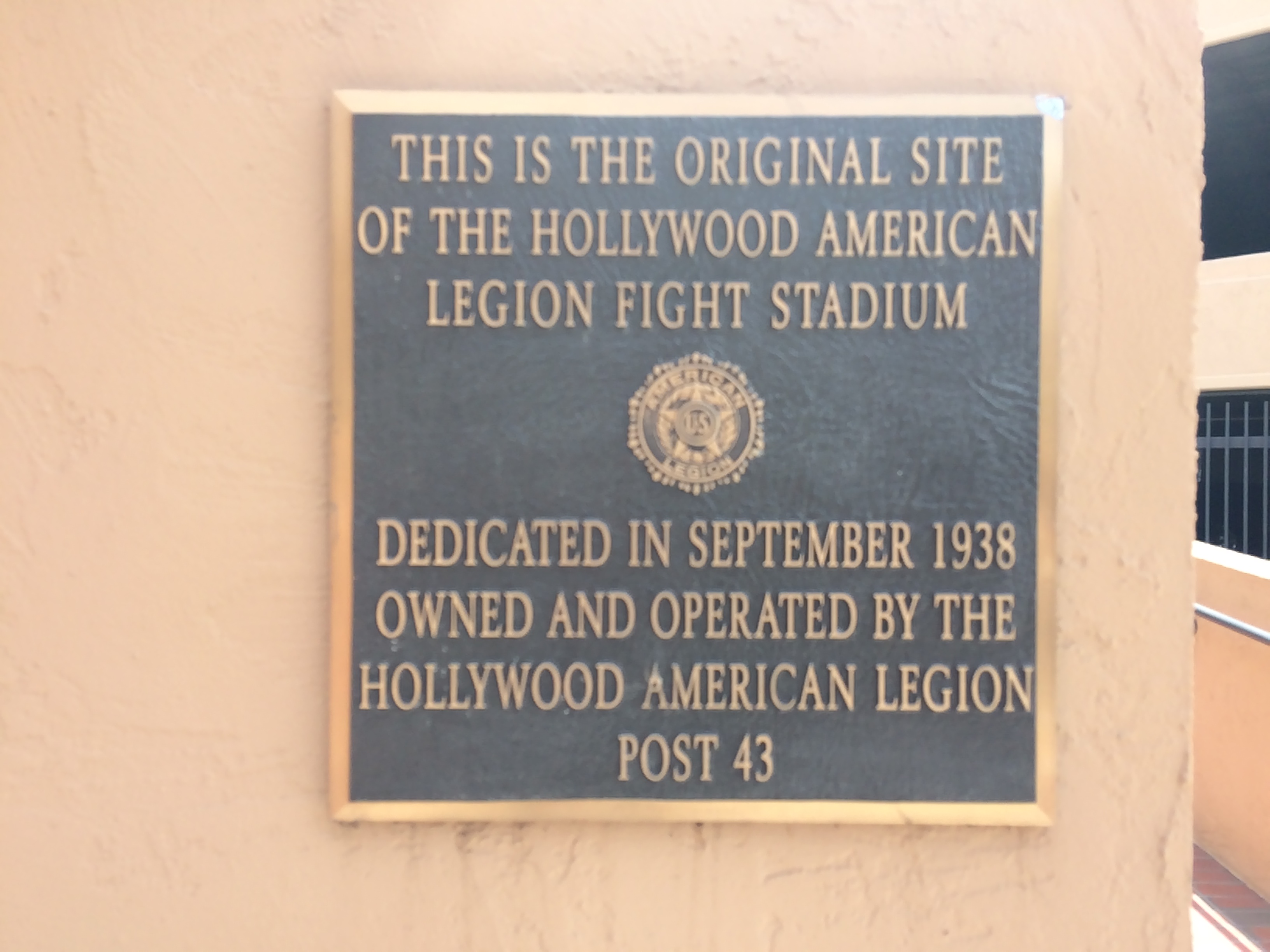 Plaque commemorating the site of the Hollywood Legion Stadium. (Photo by Richard Bence)

Sadly, so few of the wrestlers who entertained huge crowds at the Hollywood Legion Stadium ever achieved the status or recognition that athletes in other sports receive. Similarly, the historic buildings of Hollywood can often be overlooked, battered by time and neglect. But encased within these walls is the grit and determination of athletes like Hank who risked their lives and suffered crippling injury. The two-story, 55,502-square-foot site, which retains the walls and roof of the former stadium, remains a tribute to athletic prowess and sportsmanship. It now operates as an LA Fitness gym. 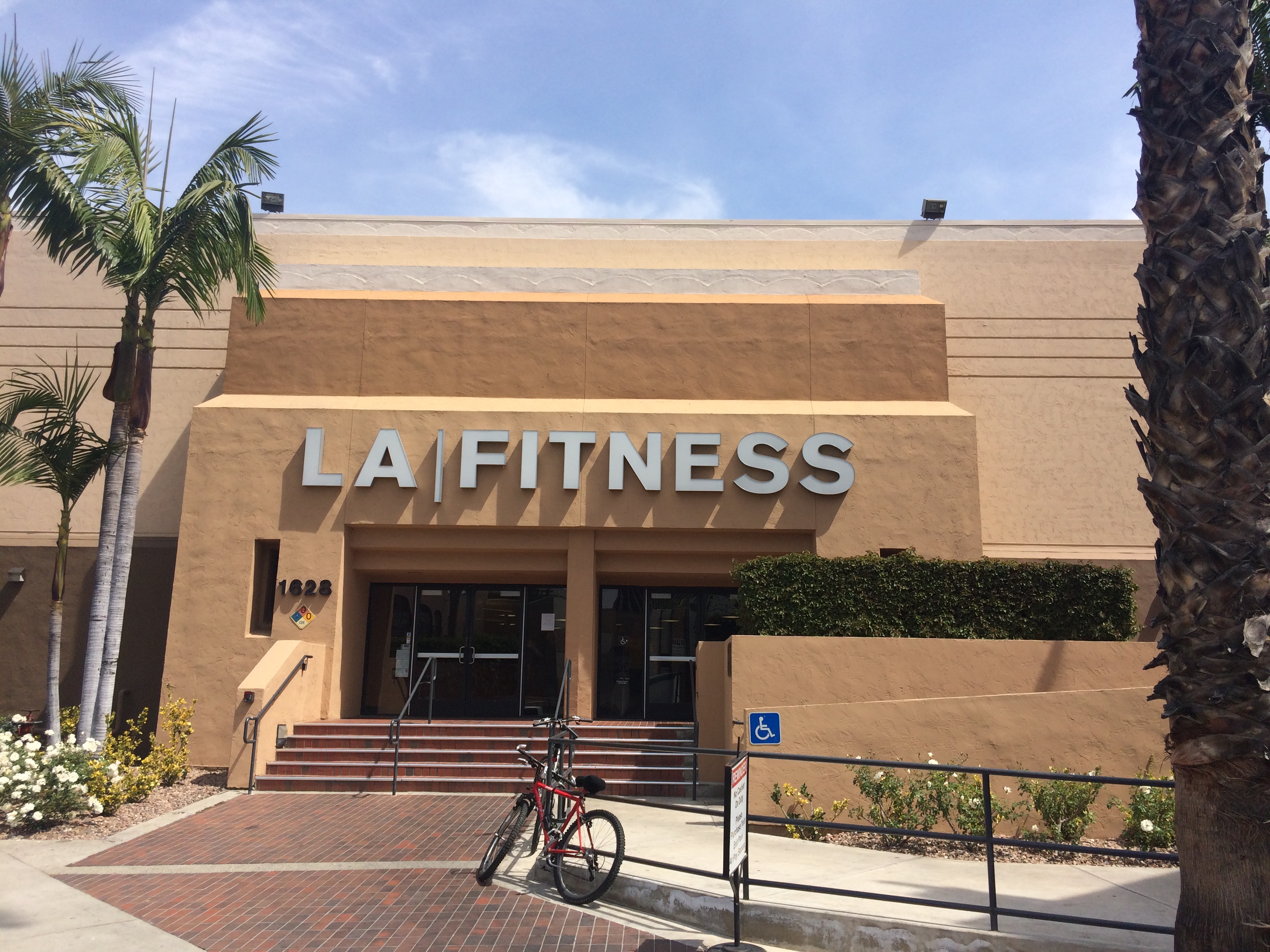 Los Angeles is both muse and home for British-born culture journalist Richard Bence. His mission is to chronicle and unearth the hidden stories of Hollywood with a special focus on its heritage. He has a passion for preservation, loves all things midcentury and enjoys getting close to nature on a canyon hike or lapping up the architectural riches of the city he calls home. He contributes to Monocle, Monocle 24 and United’s Rhapsody magazine. richard-bence.com