Where to Take the Best Instagram Photos in Hollywood

If your Instagram feed could use a lil’ pick me up … or you find yourself in Los Angeles for the first time with a free day for shameless posing at hand, there’s only one place to go for an instant IG revamp.  You guessed it … Hollywood.  Here I have compiled my top 10 spots for the perfect Hollywood-centric Instagram feed.  These choices range from some of the more conventional backdrops to an assortment of brand new hidden gems of the neighborhood.  So grab a friend, fix your hair, and charge your phone … it’s about time your feed takes a trip to Hollywood. 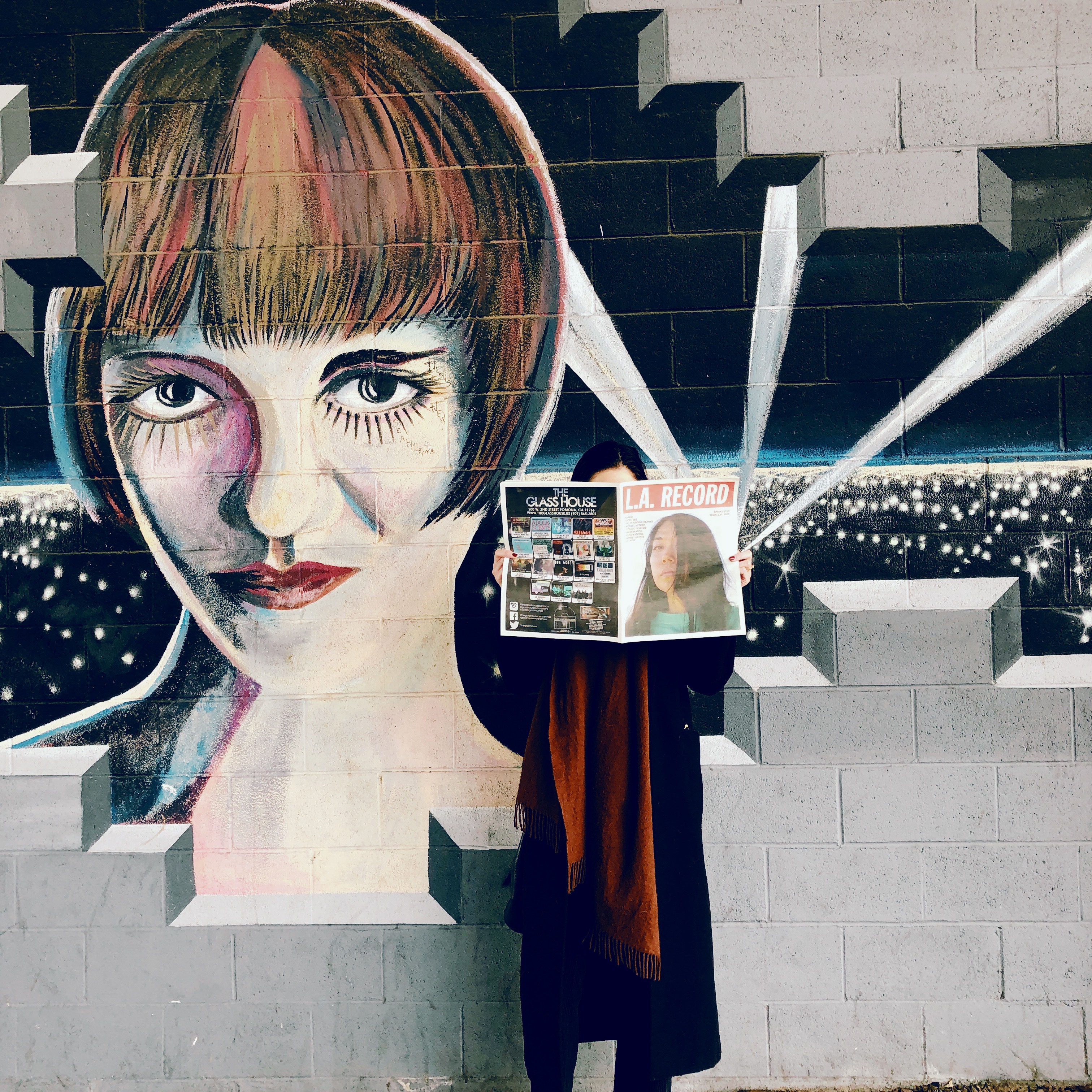 You may have noticed the extensive surrounding murals adorning this family-owned storage unit at the southwest corner of Argyle Ave and Yucca St, especially when you’re stuck in traffic trying to get on the 101 — but have you ever stopped to take an Instagram photo?  What a gem this place is!  It has been a Hollywood staple since 1983. 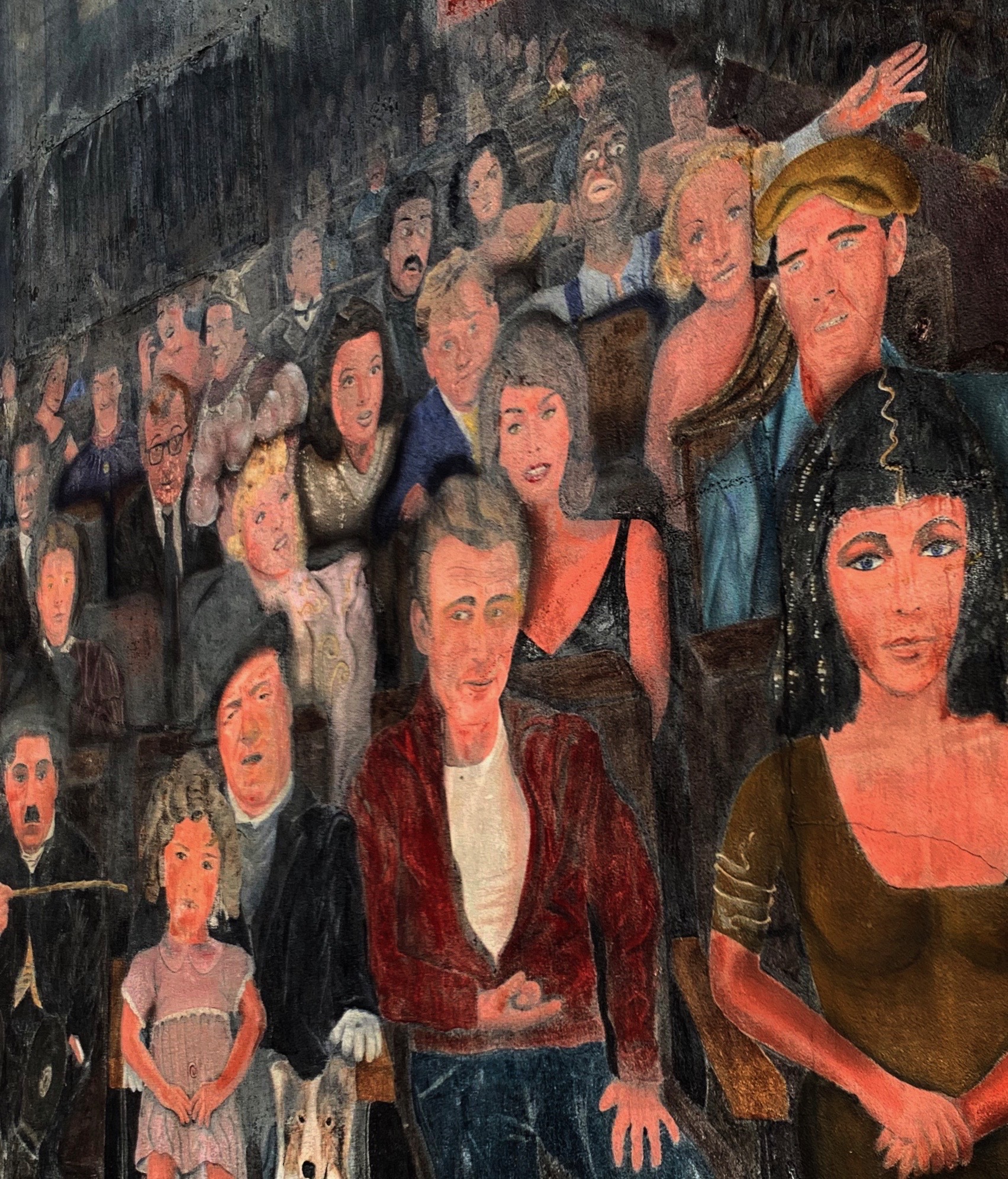 The "You Are The Star" mural is painted on the side of the historic Attie building. (Photo by Mackenzie Morrison)

Thomas Suriya’s You Are The Star

Famed for its perspective, this work of art features a group of Hollywood’s finest icons looking at you.  As Thomas Suriya’s first attempt of a mural back in 1983, it’s just a must.  But, promise me you’ll take a second to take it in first.  It has a powerful message attached, if you allow it.

[** (Here is a fun Behind The Scenes clip of Emma Stone walking past the Hollywood Bowl Self Storage & Thomas Suriya’s You Are A Star Mural in La La Land.) ] 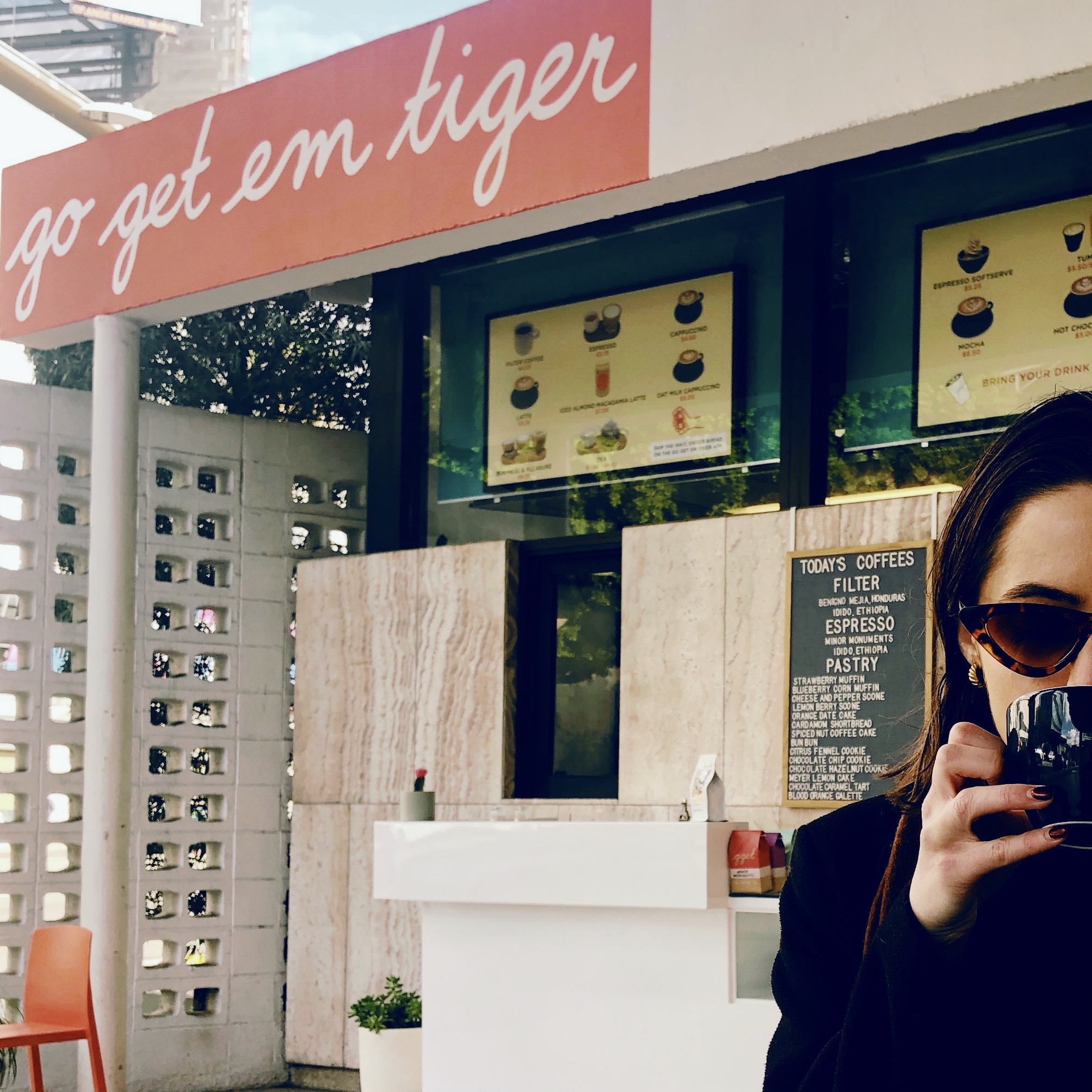 Go Get Em Tiger recently opened a Hollywood location in the forecourt of the Cinerama Dome on Sunset Blvd. (Photo by Mackenzie Morrison)

Nestled in the front courtyard of the Cinerama Dome, Go Get Em Tiger has finally made its Hollywood debut and it is here to stay! Plus - word on the street is they will soon be staying open until 11 PM - so your late night movie craving can finally be paired with a late night caffeine fix as well.  Or, bring your book, take a midday coffee break, and find like-minded others who use #gget on their IG feed. 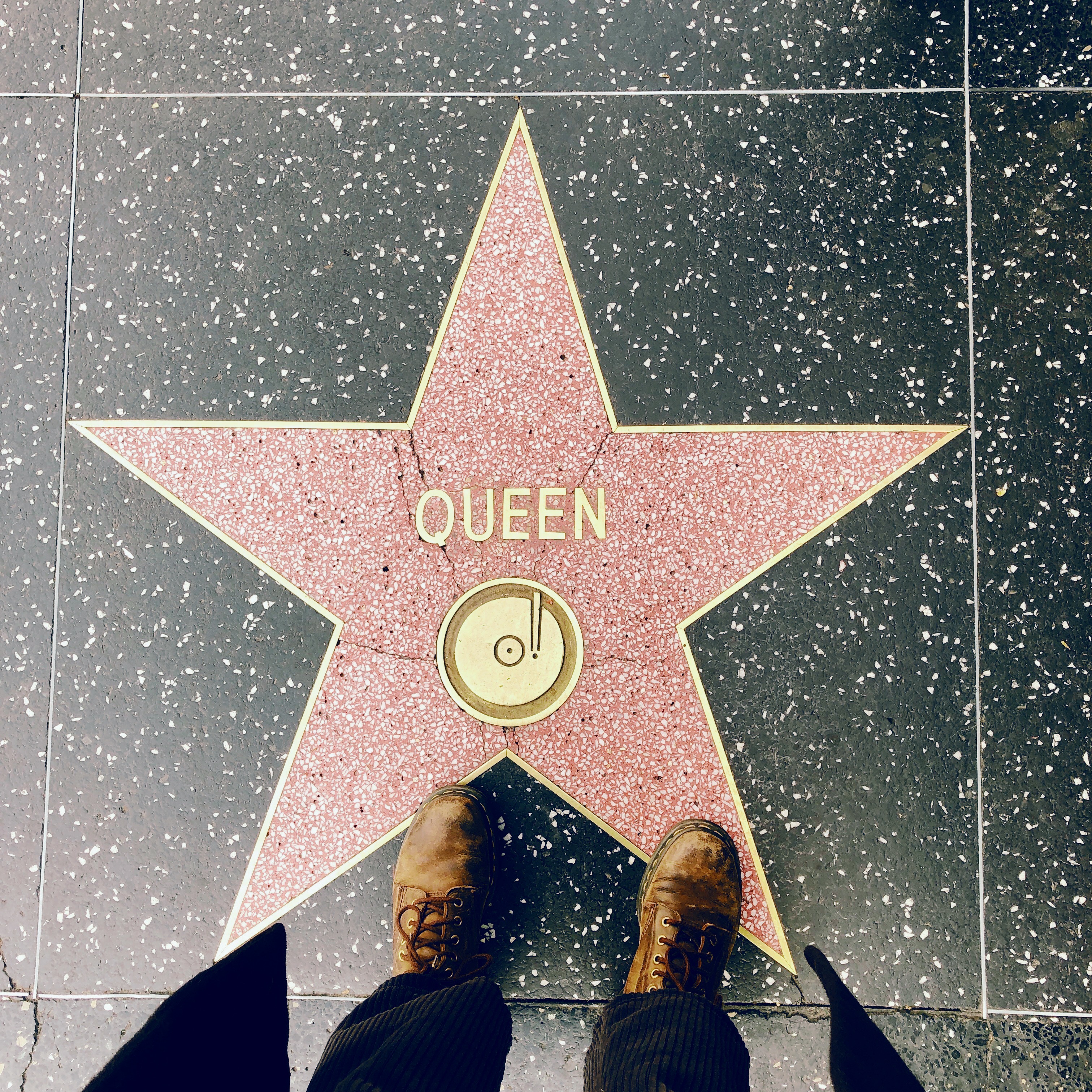 It’s an obvious one, but it never fails.  Pick your favorite star on the Hollywood Walk of Fame and snap an overhead pic.  (This Queen star is on the south side of Hollywood Blvd between Cosmo St and Ivar Ave.) 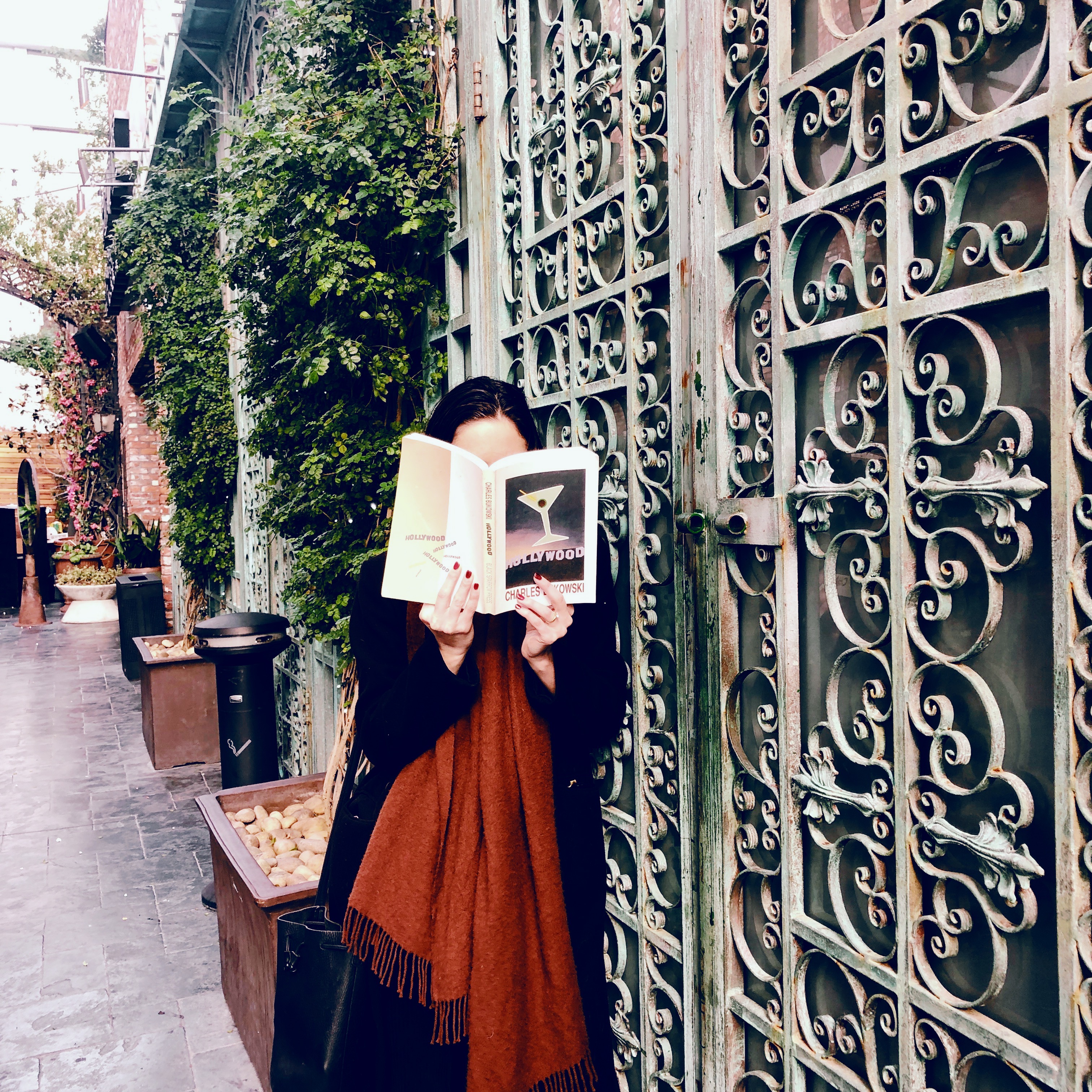 Part of the Dream Hotel complex, the west Cahuenga Alley has been upgraded to a pedestrian thoroughfare linking several destinations. (Photo by Mackenzie Morrison)

An alley that can feel more like a hidden Hollywood vortex, with its back door portals into some of Hollywood’s finest establishments (i.e., Hotel Cafe, Beauty & Essex, The Highlight Room), it is also an Instagram-worthy haven.  There are actually several backdrop possibilities to choose from; you’re just going to have to go see for yourself. 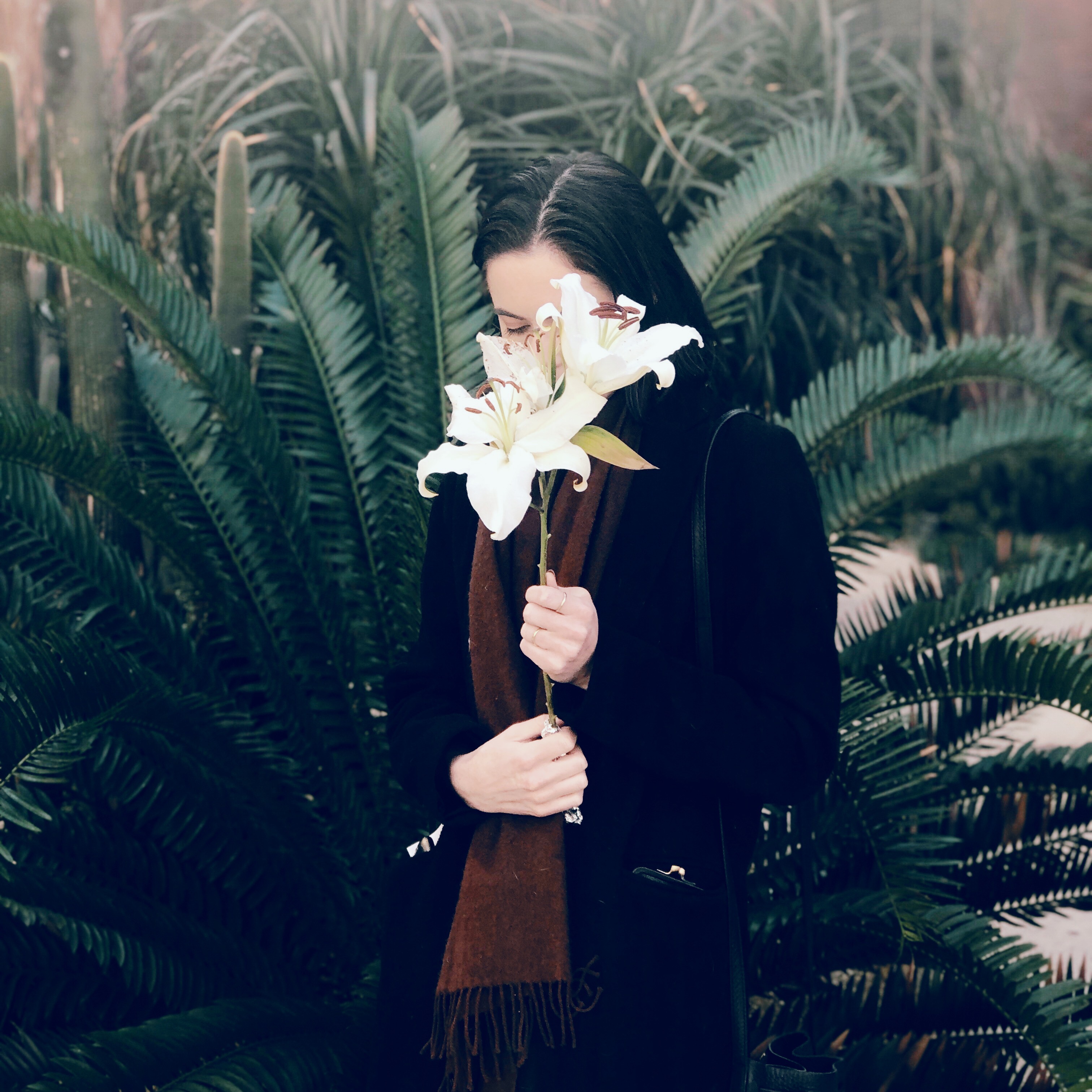 The El Centro Cactus Garden is a fairly new arrival in Hollywood, and will soon have a new neighbor when Amoeba Music moves to El Centro in the fall of 2020. (Photo by Mackenzie Morrison)

Curated by Carlos Morera of The Cactus Store, the El Centro Cactus Garden is the perfect backdrop to show off your natural side without making the trek to Joshua tree. Some potential tongue-in-cheek caption ideas: “Always finding the calm amidst the chaos,” or - “#newyearnewme” … 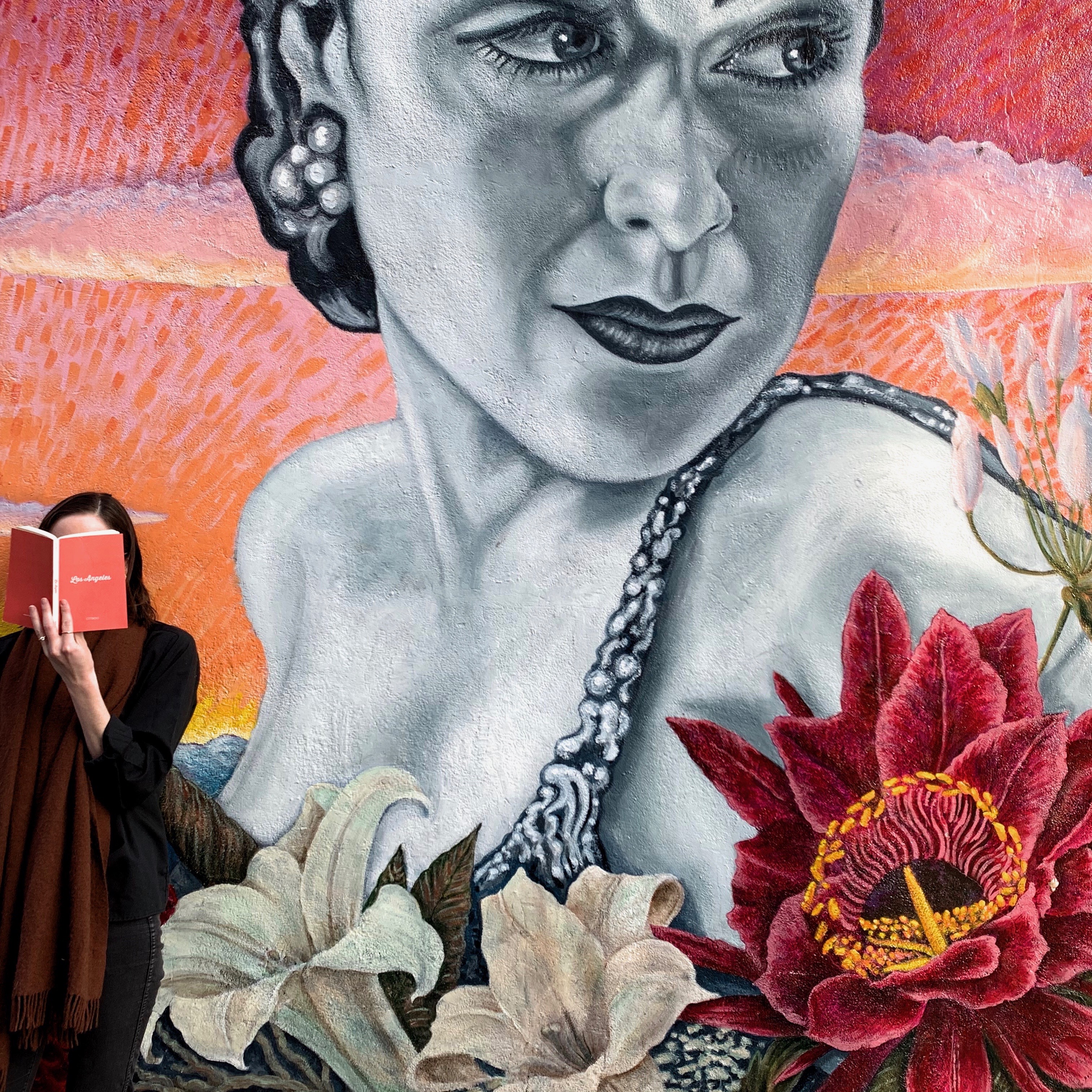 The Dolores Del Rio mural was revitalized in November, 2016, by the original artist, Alfredo de Batuc. (Photo by Mackenzie Morrison).

Originally painted in 1990, this gorgeous portrayal of Dolores Del Rio, the first major Latin American crossover Hollywood star, has become a true Hollywood destination. The colors and the history, the artist and the legend - it will make you immediately want to plan your next Dolores Del Rio movie night. 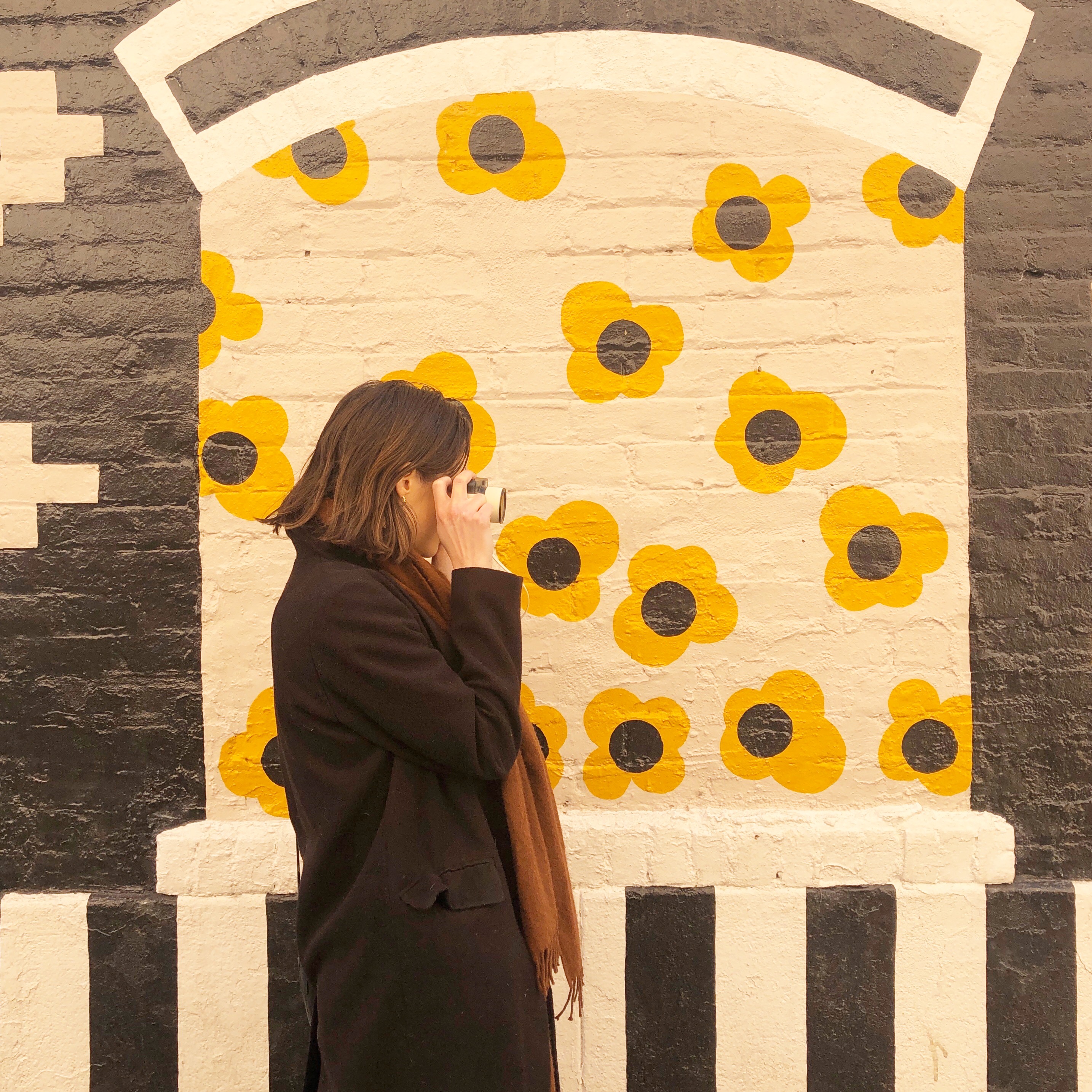 One of the most recent murals to pop up in Hollywood is located just south of the Hollywood Building. (Photo by Mackenzie Morrison)

Now this little spot is located at the first alley entrance on the west side of Cahuenga just south of Hollywood Boulevard.  We are still waiting for this adorable row of new shops to open, so more on that later, but in the interim, it doesn’t hurt to snap an Instagram pic in front of this super cute yellow and black painted wall. 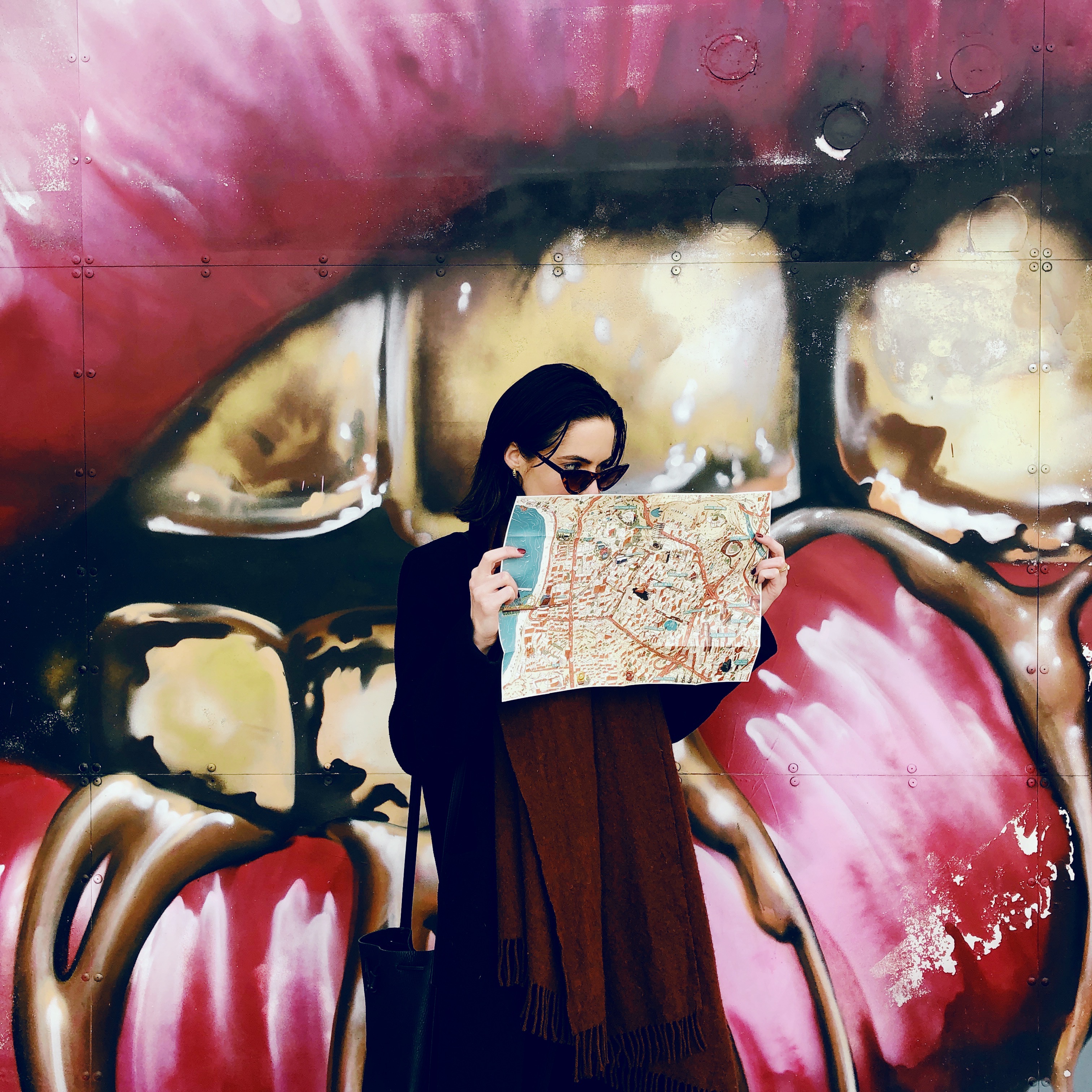 This brightly colored mural is located on Ivar. If you have information about the artist, please send it our way! (Photo by Mackenzie Morrison)

Nearly across the way from The Hollywood Knickerbocker, this mural of red lips and dripping gold is just the right amount of edge. 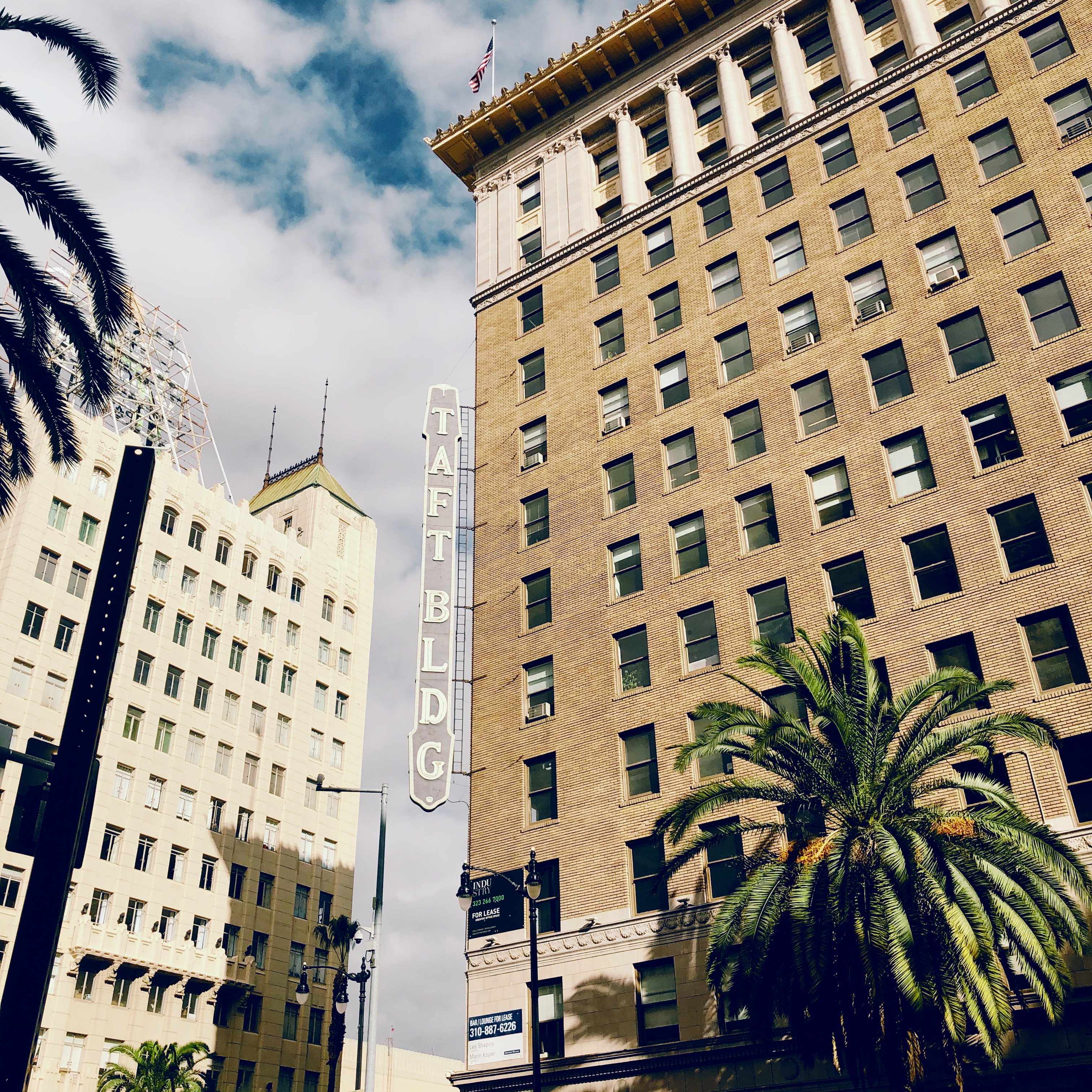 Okay, last but not least, my personal favorite tip for your Hollywood Instagram journey: don’t forget to look up.  There’s a lot going on at street level, but some of the most glorious hidden gems can be found when you shift your perspective upward.  Like this Hollywood Blvd and Vine St photo of the historic Taft Building, which many don't know was the first high-rise office building in Los Angeles. Or, this photo taken of the Los Angeles Film School at Sunset Blvd and Ivar Ave. 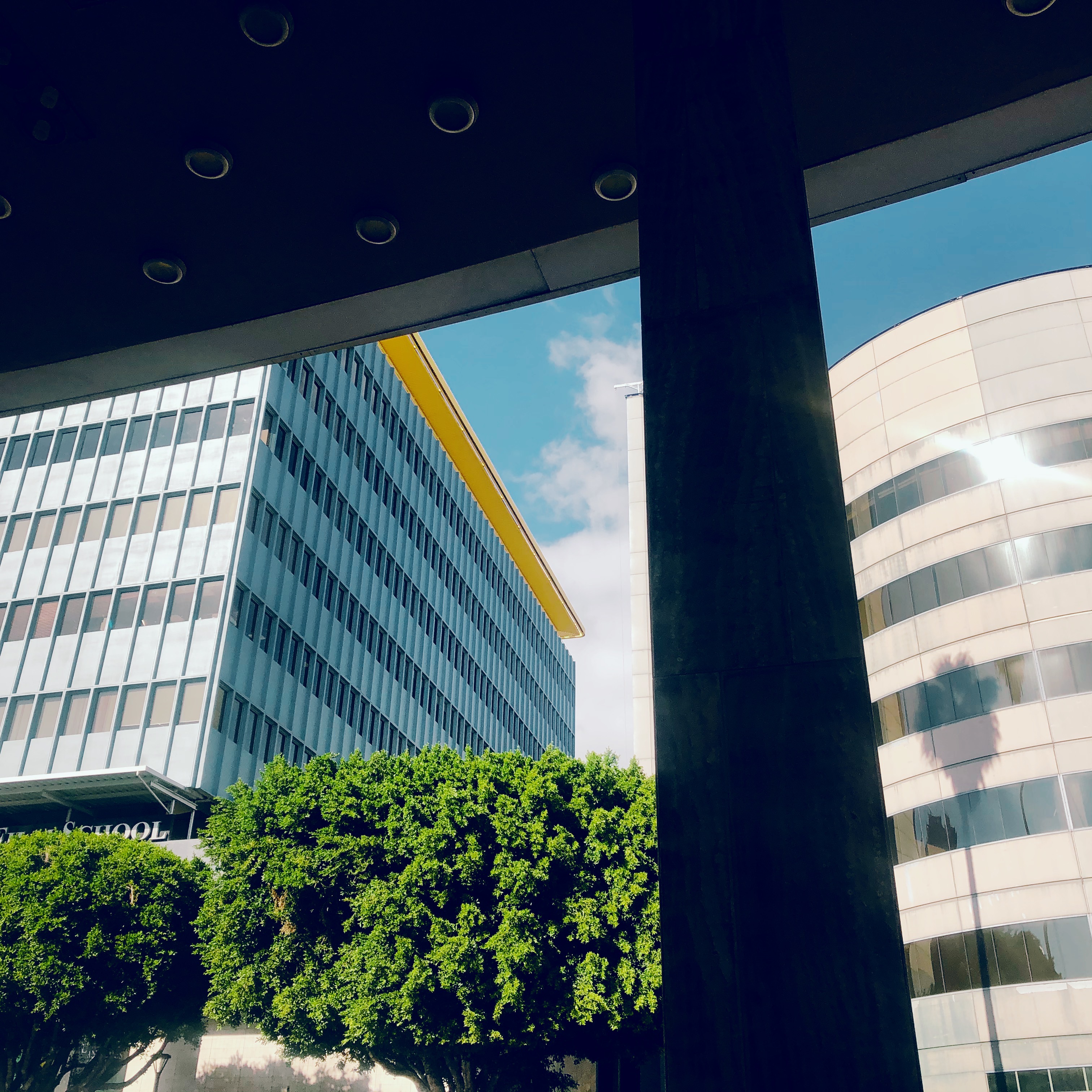 Los Angeles Film School is housed in the historic RCA Building, which was once used as a recording studio by several legendary artists such as Elvis Presley, The Rolling Stones and The Grateful Dead. (Photo by Mackenzie Morrison)