Pizza Orgasmica is a unique quick service restaurant that recently opened at 6338 Hollywood Boulevard, just east of Ivar Avenue. It is located on the world-famous Walk of Fame, close to the Pantages Theatre, one of Hollywood’s major venues for live events. Although there are many eateries in the neighborhood, the store differentiates itself through its pizza-focused menu and tongue-in-cheek branding. As foot traffic recovers to pre-pandemic levels, this new tenant will appeal to hungry locals and tourists seeking a slice of pizza before or after a show. 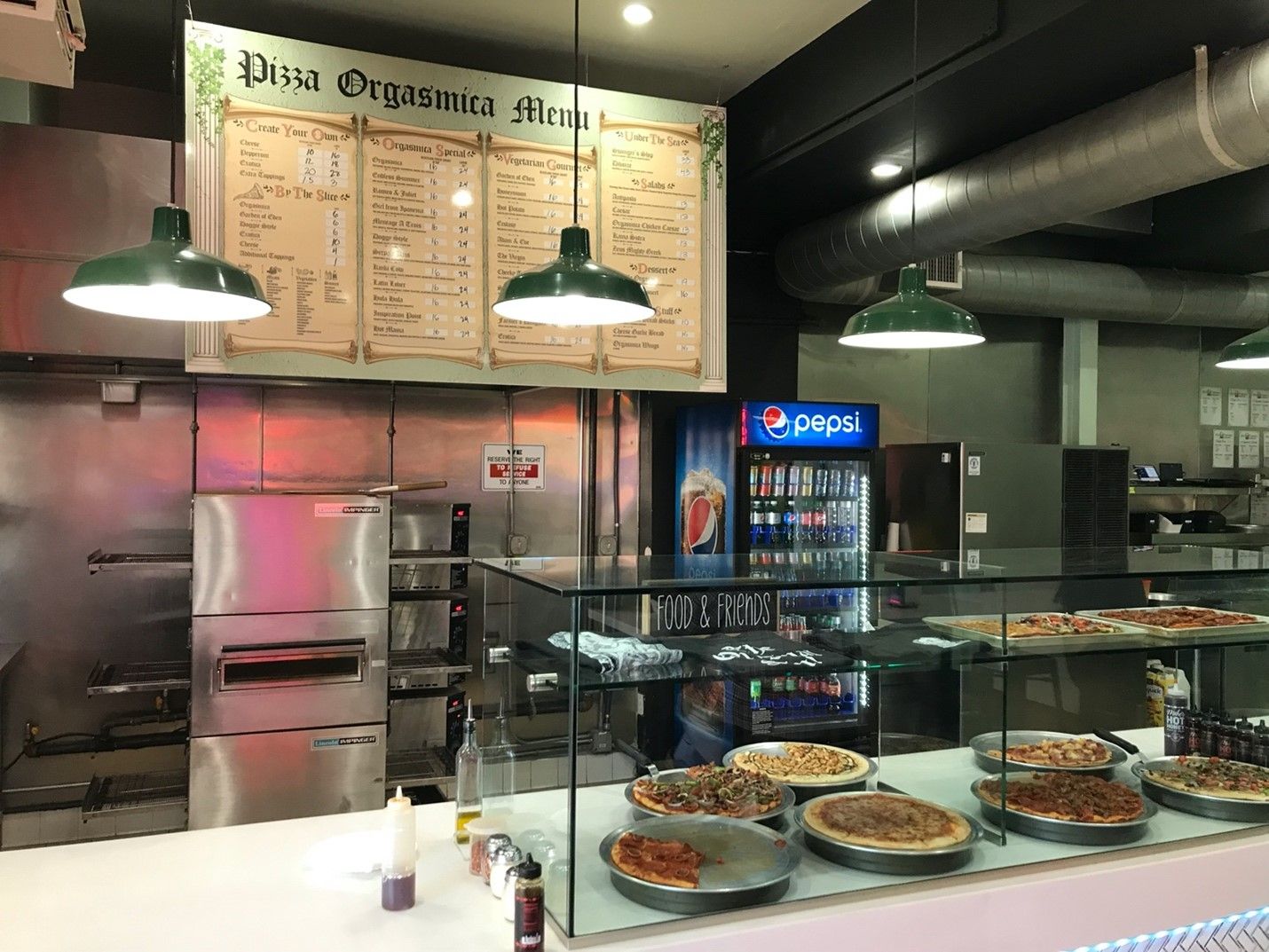 Taking over the space formerly occupied by Combo’s New York Pizzeria, Pizza Orgasmica had its grand opening on December 3, 2021. 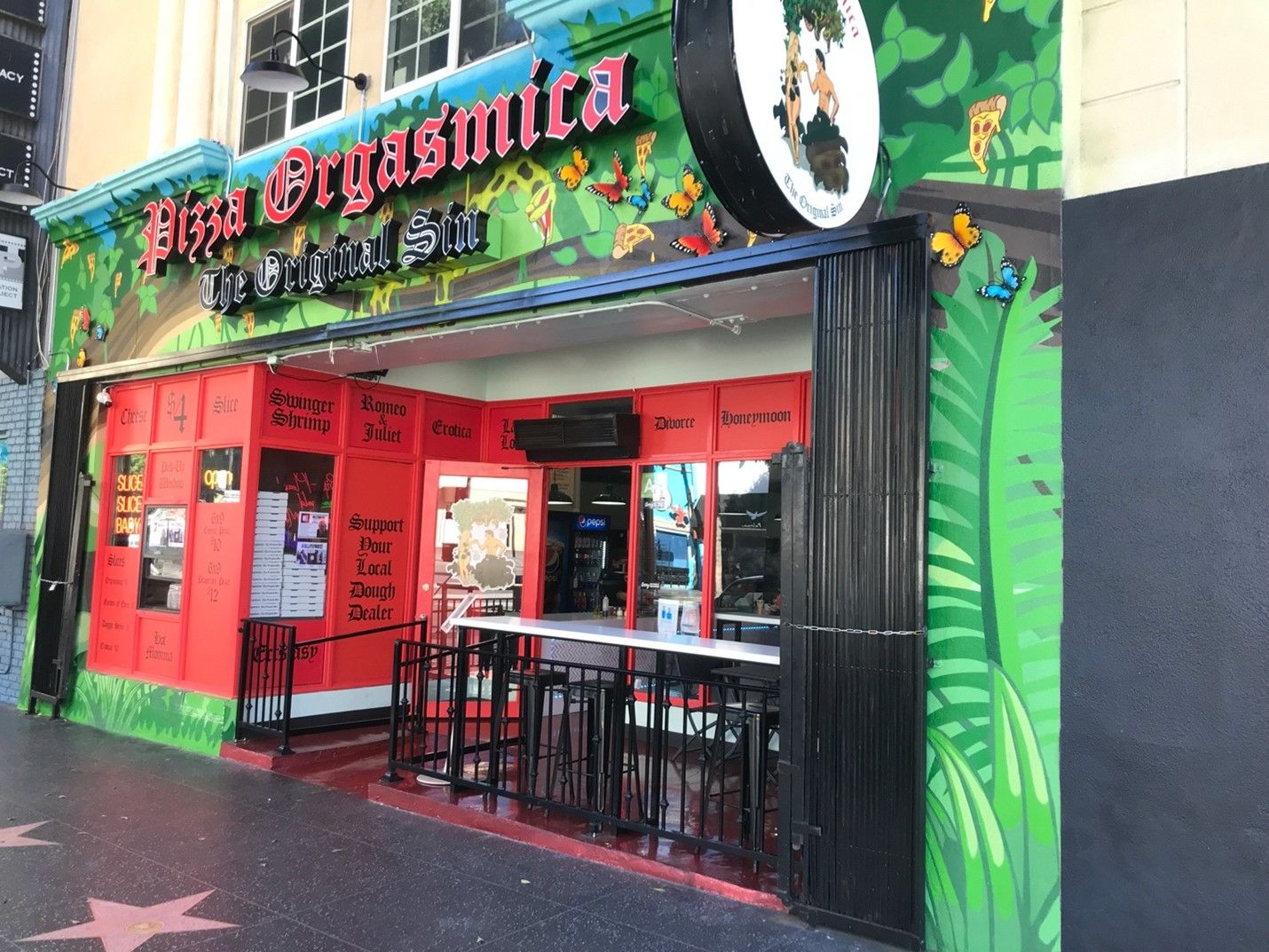 The eye-catching storefront features a colorful mural that evokes the Garden of Eden. The main signage is in Old English font, with “Pizza Orgasmica” in red, and the tagline “The Original Sin” in black. There is also a round hanging sign displaying the brand’s logo—a parody of Adam and Eve, in which Adam is offering Eve a slice of pizza.

The interior has a whimsical, creative vibe that encourages pizza lovers to feel welcome. The white painted walls are decorated with colorful artwork and neon signage. Across the counter is an “in case of emergency break glass” box with an artificial pizza slice inside, rather than a fire extinguisher. There is an indoor dining area with bar stools, as well as some outdoor patio seating at the front of the store.

Unlike some of the other pizza parlors in Hollywood—whose eclectic menus include sandwiches, gyros, and kabob plates—Orgasmica chooses to focus on pizza and salads. The website indicates that the food is prepared by hand from farm fresh ingredients. There are many options available for both meat lovers and vegetarians. 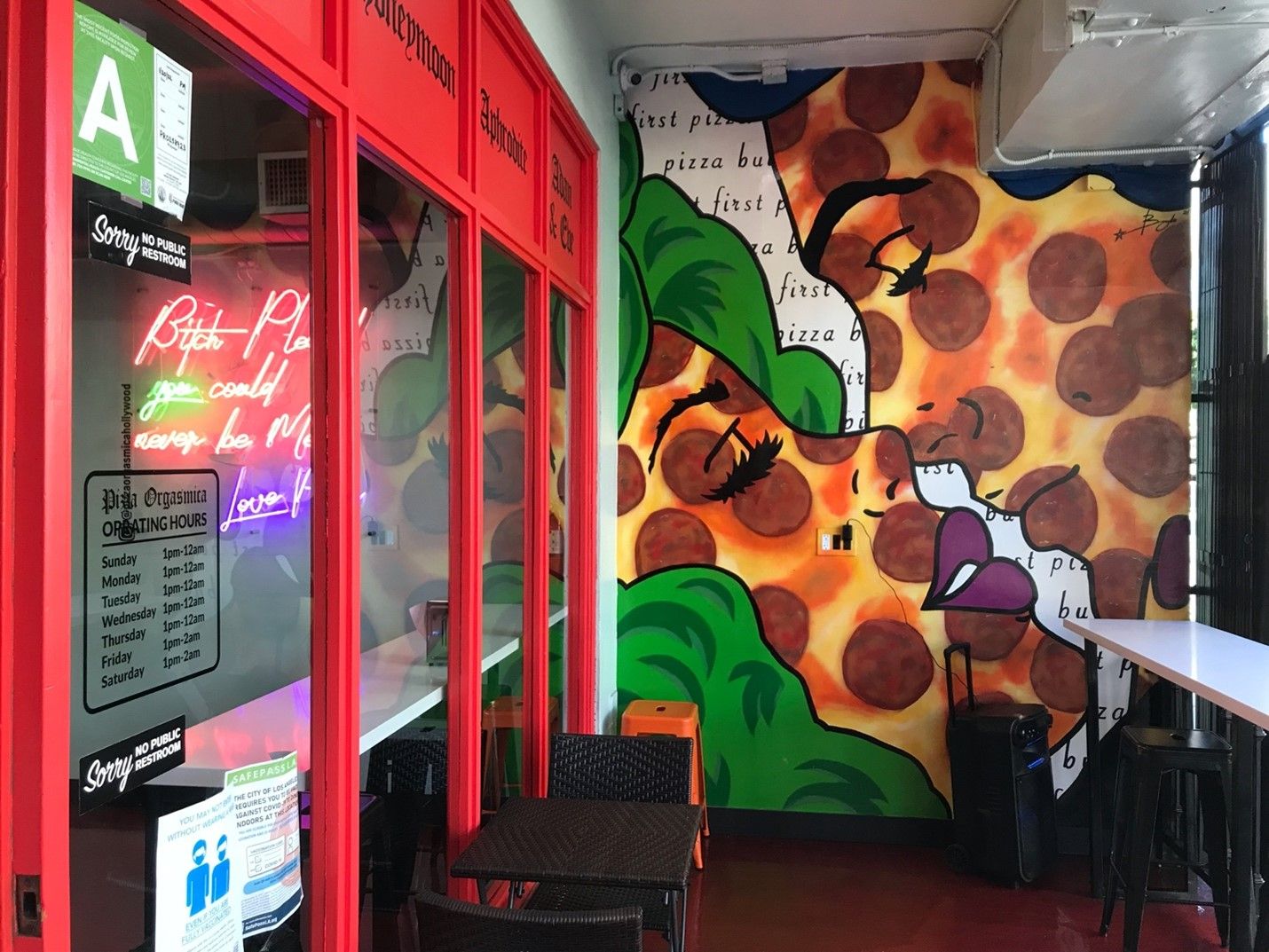 In addition to the indoor dining room, Pizza Orgasmica has outdoor seating on the patio. (Photo by Steven Herrera)

Customers who choose to create their own pizzas have the choice of two different crust styles: a 6”x9” Sicilian thick crust ($10.00), or a 14” Large thin crust ($16.00). There is an impressive assortment of toppings to choose from: six cheeses, seven sauces, twelve meats (plus shrimp), and twenty-one vegetables. Each topping adds $1.50 to the price of the 6”x9” Sicilian, or $3.00 to the 14” Large.

In addition to “Create Your Own” and “By The Slice,” the menu features a wide variety of specialty pizzas. Choices under the “Orgasmica Specials” and “Vegetarian Gourmet” sections are $16.00 with the 6”x9” Sicilian thick crust, or $24.00 for the 14” Large. An example of an “Orgasmica Special” is the “Serpent’s Kiss,” which consists of cheddar garlic sauce, lemon pepper chicken, sliced provolone, romano, parmesan, zucchini, red onions, and light green onions. The “Sweet Valentine,” which is from the “Vegetarian Gourmet” section, has white wine sauce, rosemary potato, roasted red pepper, white onion, and basil.

The “Under The Sea” options are only available with the 14” Large crust. These include “Swinger’s Shrimp” ($33.00), and “Divorce” ($43.00). The latter consists of mozzarella, lobster infused pink sauce, and shrimp.

The salads are $13.00 each. Besides “Antipasto,” “Caesar,” and “Chicken Caesar,” there are a couple of other options. The “Kama Sutra” consists of spinach, bacon, and spinach dressing. The “Zeus Mighty Greek” has feta, tomatoes, red onions, kalamata olives, cucumbers, lettuce, and Zeus secret dressing.

There are two desserts available. The Nutella Orgasm ($19.00) is a pizza crust topped with Nutella, strawberries, blackberries, and banana. The Orgasmic Dessert ($16.00) is six deep fried Oreos.

The “Other Stuff” on the menu includes bread sticks, garlic bread, and wings.

Carryout orders can be placed through the Pizza Orgasmica website. Delivery is available through Grubhub.

On Elizabeth Taylor’s birthday, February 27, Pizza Orgasmica will offer “Buy 1 Get 1 Free” on select pizzas. The flyer that was sent by mail must be presented. Other specials are included on the flyer.

Pizza Orgasmica puts a unique twist on the pizza establishment with its suggestive branding and amazing customization options. The company has differentiated itself through both the product and the experience. The new store diversifies the Hollywood landscape, and provides a source of gourmet pizza to the neighborhood.