It’s no secret that Hollywood has been going through a renaissance in the past two decades. Some of the projects constructed during this time period include Hollywood & Highland, The W Hotel and 1600 Vine, Emerson College LA, and Eastown Apartments. Meanwhile, several existing properties have been renovated and adapted for modern uses, including Columbia Square, Mama Shelter, and the Taft Building. Plans are underway to modernize and add additional structures to the historic Hollywood Palladium, Earl Carroll Theatre, and the Hollywood Citizen News building. Many other projects have already broken ground or are in the planning stages, but there are still several notable properties with amazing histories that are sitting vacant, just waiting for the right person with vision and means to breathe new life into them. Here are some of the most notable properties that are ready for their comeback! 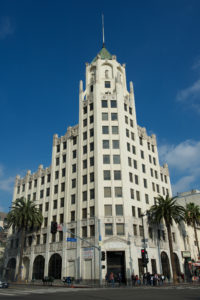 The First National Bank Building at the Northeast corner of Hollywood & Highland.

Perhaps the most iconic building in Hollywood, the First National Bank Building towers twelve stories over the intersection of Hollywood and Highland. Built in 1927, it was the tallest building in Los Angeles until 1932.  Its distinctive architecture, a hybrid of art deco and neo-gothic styles, features numerous gargoyles and unique features. It was designed by Meyer & Holly, the firm which also built nearby Grauman’s Chinese and Egyptian Theaters. As the name would imply, it was originally occupied by the First National Trust and Savings Bank, which soon fell victim to the great depression. Later, it was occupied by Security Pacific Bank up until 2008. The property is currently for lease through the owner, and despite needing some major renovations, retains all its original beauty and stature at a highly important location. 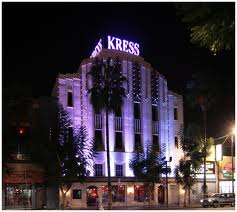 The Kress Building has the potential the light up the mid-section of Hollywood Blvd.

This beautiful Art Deco building was originally home to S.H. Kress and Co., one of Hollywood’s first department stores, back in 1934. It is perhaps more famously known as the original Fredericks of Hollywood; Frederick Mellinger (inventor of the push-up bra) opened his flagship store in the landmark building in 1947 and operated there until 2005. After a nearly $30 Million renovation, it reopened as a multi-story restaurant and nightclub called The Kress in 2008. The Kress drew in celebrities like David Spade, Paris Hilton, Justin Timberlake and Matthew Perry. Sadly, it has remained vacant since closing in 2011. It is currently available for lease through Jones Lang LaSalle. 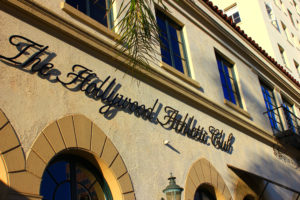 Founded in 1924 and backed by celebrity clientele like Charlie Chaplin, Rudolph Valentino and Cecil B. DeMille, the Hollywood Athletic Club was, like the First National Bank Building, designed by Meyer and Holly. Many celebrities trained and socialized there, or stayed in the hotel tower. It housed an Olympic-sized swimming pool, a gymnasium, saunas, game rooms, and a restaurant. In 1949, it became the site of the first Emmy Awards show. Throughout the years, it was known as the Gary Berwin Entertainment Complex, the headquarters for Island Records, and Baby’O Recording Studios. It was purchased by the Nourmand & Associates and in recent years has been rented out for nightclubs and special events.  It is also available for lease. 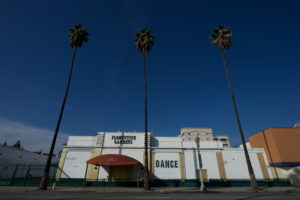 The Florentine Gardens on Hollywood Boulevard.

The historic Florentine Gardens opened in 1928 as a glamorous dinner theater, catering to Hollywood’s elite. It billed itself as having the finest dance floor on the west coast, which hosted a floorshow in the 1940s produced by “Granny” Granlund, who had previously operated shows on Broadway in New York City. In 1942, it hosted Marilyn Monroe’s wedding to her first husband. It later became known as the Cotton Club, featuring black entertainers. The 30,000+ square foot facility is an anchor on the eastern gateway of Hollywood Blvd., just west of the 101 Freeway’s offramp onto Hollywood Blvd. The venue is currently still utilized as a nightclub on weekends, under the name Florentine Hollywood, catering to an 18 and over crowd. 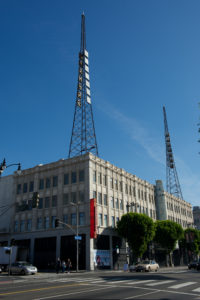 The Historic Hollywood Pacific Theatre at the Northeast corner of Hollywood Blvd. and Wilcox Ave.

The largest and perhaps most iconic building on our list, the Hollywood Warner Theatre (as it was originally known) opened in 1928 as the largest theater in Hollywood with 2,700 seats.  It was the first and only flagship theater built by a major studio in Hollywood, and was the first theater in Los Angeles wired for “talkies.” In more recent years, it was used by Dolby to test digital audio for movies. It was damaged by the 1994 Northridge Earthquake but continued to host office tenants and a church group in the auditorium until a few years ago. The theater currently sits vacant; the only way for a member of the public to get a glimpse inside this historic structure is on our Old Hollywood Walking Tour. The property is owned by Robertson Properties Group, who own and operate the nearby Arclight Hollywood and the Cinerama Dome Theaters.

If you are interested in any of these properties, feel free to reach out to us at info@hollywoodbid.org for more information.