When Christian Meoli, owner of Arena Cinelounge Sunset, opened the theater in 2012, he had no idea the first-run arthouse cinema would be making popcorn into its own film art form.

“I saw a need for a screen dedicated to new independent films…I wanted to influence and maintain the importance of film culture in Los Angeles,” Meoli said.

With that in mind, the 92-seat theater is still doing just that, despite the pandemic, with Arena Cinelounge’s Signature Gourmet Popcorn. The luxe popcorn is currently offered in nine different unique flavors, with more selections planned. 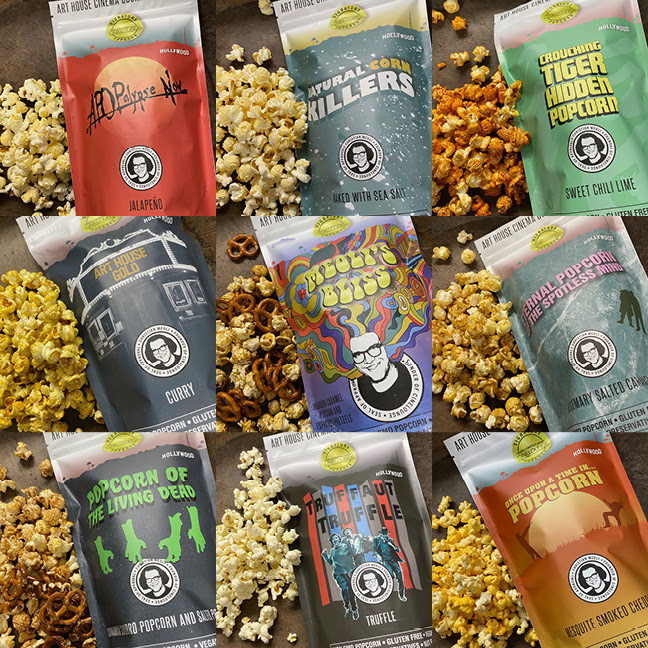 As featured in Entertainment Weekly, Arena Cinelounge's signature popcorn is nonGMO, vegan, dairy-free, nut-free, and with NO Preservatives. (Courtesy photo)

“As an independent theater owner, I’ve had to be creative about the survival and expansion of my business,” Meoli attests. “I’ve taken my love and curation of new films, and directed that energy to a signature line of gourmet popcorn.”

Every bag he sells supports the survival of the theater, as well as offering non-GMO, vegan, dairy and nut-free blossom popcorn. The flavor choices come with film-centric, fun names, which fit Meoli’s description of the treats as “especially designed for the cinephile’s palate.”

The gourmet popcorn includes flavors like Popcorn of the Living Dead, a cinnamon churro and crushed pretzels flavor mix with a title that connects films and popcorn together as do all the popcorn flavor names. Other choices include the rosemary salted caramel of Eternal Popcorn of the Spotless Mind, and the simple Natural Corn Killers, which is popcorn “naked” with sea salt. Spice lovers will enjoy the jalapeno of APOPalypse Now; Arthouse Gold’s curry flavor; and Crouching Tiger, Hidden Popcorn with its zesty Sweet Chili Lime seasoning. The popcorn selections are rounded out with the rich Once Upon a Time in Popcorn, featuring a robust Mesquite Smoked Cheddar; the truffle richness of Truffant Truffle; and last, but definitely not least, Meoli’s Bliss – bourbon caramel with espresso pretzels.

Like many an indie film, the popcorn launched for distribution at Arthouse Convergence, appropriately enough on National Popcorn Day.

Along with offering the popcorn at the Arena Cinelounge, Del Ray Theaters in Florida picked up the popcorn, as did The Marc at Park City, Utah’s Sundance Film Festival. Entertainment Weekly has featured it in their gift guide, and Amazon in a special promotion for the film The Vast of Night.

The popcorn has received raves, and because it is pre-packaged, Meoli is proud to term it safe as well as tasty. “This will be the future of popcorn in a post-COVID world,” he said.

Currently, the popcorn is a big hit through online sales. These sales keep the theater itself from shuttering, or as Meoli puts it, are “saving the home for independent cinema and filmmakers…one kernel at a time.”

So, before clicking “play” on your at-home film choice, grab this tasty treat, which is available for home delivery through Grubhub and Postmates, as well as for online purchase at the Arena Cinelounge website. On the theater’s website, two large bags are available for $15.99; larger amounts from 5 to 20 bags result in discounts. Five bags, for example, are just $25.99, and purchasers can mix selected flavors.

If you’re out and about IRL, the popcorn is also available at locations that include the Cinelounge itself.

For more information, and to order, visit http://arenascreen.com/popcorn