Have You Ever Wondered… What The Crossroads of the World is All About? 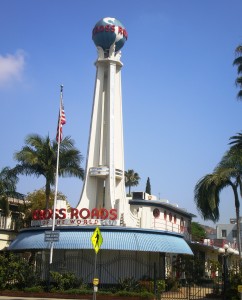 It has stood like a beacon on Sunset Boulevard at Las Palmas Avenue since 1936, welcoming visitors from all over the world. The massive 60-foot art deco tower with a blue and white globe turning slowly on its top, emblazoned with the words “Crossroads of the World,” is a well-known landmark to anyone traversing Hollywood. But how many of you have ever stopped to explore the Crossworlds of the World complex? Did you know that it was the first outdoor shopping mall ever built? And did you ever suspect that it was designed expressly to make something good out of something very bad?

In 1931, Charles Crawford was a well-known political/crime figure in Los Angeles. Known variously as “Goodtime Charlie,” “the Underworld Czar” and “The Wolf of Spring Street,” Charlie ruled a crime syndicate called The City Hall Gang that had mayor George E. Cryer in its pocket. The gang effectively ran the city throughout the 1920s until 1929, when the stock market crashed, and a new mayor was voted into office.

Trying to turn legit and escape prosecution, Charlie opened a real estate and insurance office at 6655 Sunset Boulevard. He also launched a periodical magazine called "Critic of Critics,” hiring newspaperman Herbert Spencer as publisher. On May 20, 1931, both Charlie and Herbert were found shot to death in their office, allegedly murdered by "Handsome" Dave Clark, a corrupt District Attorney. Dave Clark was tried twice and eventually acquitted of all charges.

In the meantime, Charlie Crawford’s widow, Ella, decided to carry on her husband’s real estate ventures and create something special on the land where her husband had been killed. She razed the bungalow and hired renowned Streamline Moderne architect, Robert V. Derrah, to design a truly spectacular shopping experience for the community. What she envisioned was a multi-national outdoor market that had the feeling of “a permanent world’s fair with a cosmopolitan atmosphere.” 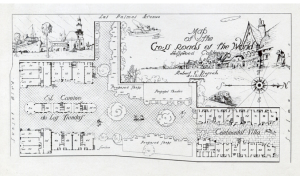 The original design for Crossroads of the World.

Derrah, who had just finished designing the Coca-Cola bottling plant at 1200 S. Central Avenue, designed a complex that featured a ship-shaped structure in the center surrounded by buildings each representing different countries of the world. The ship was the mode of transportation that would take you on a charming exploration of France, Italy, Spain, Morocco, California Mediterranean, Cape Cod, Early America, and Continental Europe.

The complex originally housed 57 high-end shops, cafes and bazaars along with 36 offices above. Wares came from nations all over the world. It was intended to be a cultural center as well as business center, and initially had seven art studios showcasing leading artists of the day. Crossroads of the World opened in a star-studded ceremony on October 29, 1936 featuring movie stars representing different countries, including Cesar Romero for Cuba and Boris Karloff for England. 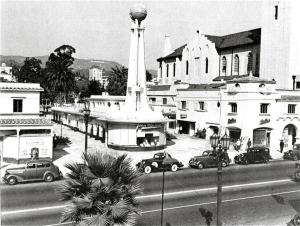 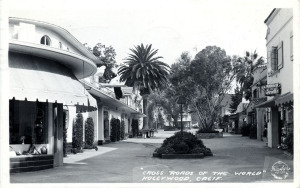 Crossroads of the World was not overly successful as a shopping center, although it paved the way for outdoor shopping malls around the world, so in the 1950s it was converted into an office complex. Alfred Hitchcock and the Screen Actor’s Guild called Crossroads home at this period. The property continued to decline throughout the 60s and 70s, even though artists such as Crosby, Stills & Nash, America and Jackson Browne had studios there.

Real estate investor Mort La Kretz bought the property in 1977 and restored it to its original splendor. It has been featured in movies such as LA Confidential and Indecent Proposal. The complex now houses a wide variety of production companies, recording studios and Taschen Books.  Who knows what Goodtime Charlie would think of the long, amazing trip the Crossroads has taken over time!

Kim Sudhalter has worked with the Hollywood Entertainment District since its early years, helping to attract investment and revitalize the area. Originally from Europe and New York, she is an architecture and history buff who has a deep and abiding love for Hollywood and its past.