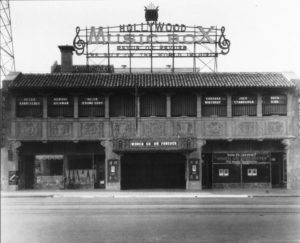 The Fonda Theatre as the Music Box, circa 1931.

Reinvented, re-imagined, and renamed multiple times over its 93-year history, the Fonda Theatre has hosted all versions of live entertainment in Hollywood since 1926. Still one of the top cultural venues in the Los Angeles area, the Fonda has presented major stars and acts since its beginning.

In 1925, C. B. Brunson sought to finally develop land along Hollywood Boulevard and Gower Street.  The land was part of the original Whitley Ranch that he managed on behalf of the Daieda Wilcox Beveridge estate, who was his mother-in-law and the woman who named Hollywood. The September 13, 1925 Los Angeles Times reported on a proposed theatre at 6120 Hollywood Blvd., “a musical comedy theatre” that would catapult Hollywood at the forefront of legitimate theatre. 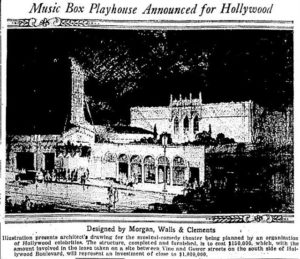 Working with long-time Hollywood residents and developers the Taft Brothers and a variety of stars, an organization was formed to lease the land and construct an elaborate Spanish churrigueresque-style theatre. Brunson established a 20-year lease for $750,000 to the company the Hollywood Music Box, Inc., led by former vaudeville star Carter De Haven.

Stage and screen executives and stars Lewis Stone, Bert Lytell, Jack Warner, Clarence Brown, Mae Murray, King Vidor, William Beaudine, Hoot Gibson, Frank Lloyd, John Gilbert, John Barrymore, and others all served as active stockholders, intending to perform as well as earn money from their investment. Unfortunately, some were slow to submit their investments and were sued in the spring of 1926 for payment.

The company intended to present revues modeled after famous New York shows like Ziegfeld’s Follies and George White’s Scandals in the $150,000 theatre, which would also contain four stores and shops. Renowned Los Angeles architects Morgan, Walls, & Clements also planned to produce special features like a rooftop garden, promenade, and social hall.  Construction began in April 1926. Both marquee and rooftop signs were constructed in September, and a permit was even pulled to create a projection room, enabling the screening of motion pictures.

The Music Box opened October 20, 1926 with a premiere to rival any major movie blockbuster for Carter De Haven’s Fancies featuring a cast of a hundred, including comedian Tom Dugan, singer Morton Downey, showgirl Doris Eaton, silent film star Wheeler Oakman, and a huge chorus of shapely starlets in the “Serpentine Dance” choreographed by Larry Ceballos. Edwin Schallert of the Los Angeles Times called the production “dazzling” and “as beautiful and glowing a conception of diverting splendor as may be seen outside of New York itself... ” The critic also found the theatre “jewel-like” in its splendor and design. 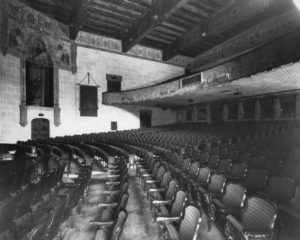 By the end of November the revue was revised, with some acts replaced by the likes of up and coming young stage actress Nancy Carroll and comedian Lupino Lane, the father of future star Ida Lupino. Throughout this early period, film stars made surprise appearances in some of the acts. Every week, different film stars dropped in on proceedings, ensuring the theatre remained a draw to audiences.

In February 1927, the theatre overhauled presentations with a new director, comedian Eddie Cantor serving as master of ceremonies, and noted comedienne Fanny Brice headlining with many of her famous impersonations. New producer Louis Macloon purchased the hit New York play Chicago at the end of February, turning the theatre into a more legitimate stage, switching back and forth from light musicals to plays.

The popularity of motion pictures hit theatrical productions hard that year as more and more people attended the less expensive movies. To compete with these popular screenings, stage producers cut prices. After problems with Equity, the Hollywood Music Box was forced to close at the end of June 1927.

By July 10, the theatre reinvented itself again to compete with movies, this time screening movie previews accompanied by a vaudeville review, travelogue, and newsreel before it. Audiences would be able to enjoy free dancing on the roof following the presentation along with a cabaret show at no service charge. After that, Macloon switched around for a few years, showing previews, musicals, and plays. Such celebrities and performers as tennis star Bill Tilden, Charlotte Greenwood, Agnes DeMille, Hermes Pan, and Bela Lugosi playing Dracula “with sinister suavity” appeared onstage.

In 1934, MGM took over the theatre for a short time to give their young performers acting and stage experience preparing for the camera, calling them the MGM Stock Players. Performers such as Martha Sleeper, Mary Carlisle, and others graced its stage.

To help pay the bills, owners rented out the facility to CBS for the taping of the radio show “CBS Playhouse” in 1936, and then named it the Lux Radio Theatre shortly thereafter when Cecil B. DeMille headed the show. The popular program featured cutdowns of movies or popular novels narrated by movie stars. For four years, every major performer in Hollywood graced its stage, including Clark Gable, Marlene Dietrich, William Powell, Barbara Stanwyck, and Cary Grant. When not in use on Mondays for the show, regular stage performances continued. By 1940, CBS began taping the Gulf Screen Guild Theatre on the stage, another radio show using celebrities in well-known stories. 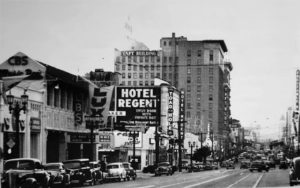 The theatre in the 1940s, operated by CBS. Photo courtesy Gregory Paul Williams.

The theatre finally focused on movies in 1944, with the Guild Theatre becoming a picture house under the Fox West Coast movie chain, redesigned in the Streamline Moderne style. The theatre still featured radio and TV tapings. In 1954, the 950-seat theatre was renamed the Fox, after it was remodeled to keep up with new technologies. A wide “Miracle-mirror” screen costing $75,000 was installed, which was adaptable for VistaVision, CinemaScope, and 3D pictures. In 1968, the name changed to the Pacific Pix, which it remained until it closed in 1977.

In 1985, the Nederlander organization and Pacific Theatre Corp. worked to renovate the space, renaming it the Fonda Theatre in honor of actor Henry Fonda. After spending $1 million, the companies reopened the now 863-seat theatre February 11, 1985 with a production of Twelve Angry Men. Over the next few years, such productions Glengarry Glen Ross, Driving Miss Daisy, and Tru appeared onstage.

In 2002, the theatre was restored as faithfully as possible back to its original 1920s look and was rechristened the Music Box Theatre.  As the Music Box, the theatre began hosting live concerts, special events, and filming. Goldenvoice leased the space in 2012, and the name reverted back to the Henry Fonda Theatre.

Mary Mallory is the author of Hollywoodland and three other books. She also writes for the blog the LA Daily Mirror and serves on Hollywood Heritage’s Board of Directors.