Then as now, Hollywood film companies on tight turnarounds or budgets searched for shooting locations close to home. The intersection of Hollywood Boulevard and Cahuenga, the center of Hollywood’s business district, served as one of the most popular filming locations from the 1910s through the 1950s. Such stars as Charlie Chaplin, Mary Pickford, Buster Keaton, Harold Lloyd, Buster Keaton and Mabel Normand filmed in the intersection. 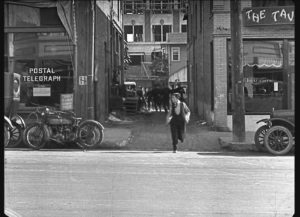 Buster Keaton heading out to Cahuenga from the Cosmo Alley in Cops. The Palmer Building is featured behind Keaton.

Just off the intersection and adjacent to Cosmo Street and a small alley running parallel to Hollywood Boulevard between Cahuenga and Cosmo, the 1922 Palmer Building also got its chance to shine onscreen. As film historian John Bengtson has pointed out in his blog Silent Locations, the little alley offered a perfect place to shoot, hidden behind walls off a main street and ending on seldom-traveled Cosmo Street, dead ending at the western exterior of the Palmer Building.

Before the Palmer Building’s construction, pioneer director Lois Weber shot in the alley in 1916 for her landmark anti-abortion film Where Are My Children?, followed by legendary magician Harry Houdini shooting a scene for his 1919 Famous Players-Lasky film The Grim Game at the same location. The Lasky studio was located just a few blocks away at Selma Avenue and Vine Street. In 1921, Chaplin also filmed a scene of his classic 1921 motion picture The Kid here.

In 1922, Keaton returned to the small alley off of Cahuenga to shoot scenes for his short Cops, including the legendary scene where to escape chasing cops he grabs a passing car one-handed and is pulled out of frame. The camera looks straight down the alley at the western wall of the Palmer Building, still under construction. 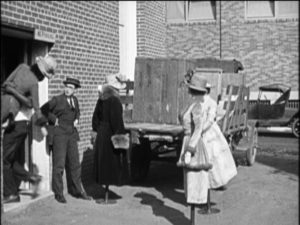 Harold Lloyd decides to impersonate a mannequin in order to be carried into his workplace unnoticed in Safety Last.

By the time Lloyd returned in 1923 to shoot scenes for his classic feature Safety Last!, the Palmer Building had been completed and become the home of the weekly Hollywood Citizen newspaper, owned and operated by Harlan and Orlando Palmer. Arriving early to work at his character’s job in the De Vore Department Store (the Markham Building at the southwest corner of Hollywood and Cosmo), Lloyd finds himself whisked away in a laundry truck turning south from the alley onto Cosmo, looking directly at the Palmer Building. Later returning to the same location, Lloyd must discover a way to sneak in, after arriving late. He impersonates a mannequin in order to be carried into the building.

For another scene at the southwest corner of the Markham Building looking directly at the Palmer Building, Lloyd convinces his roommate Bill Strother to knock over a policeman who was his friend back home. Instead, Bill knocks down the wrong cop (Noah Young), who ends up chasing Strother for the remainder of the film. 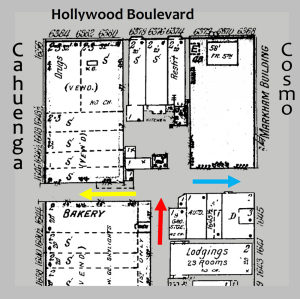 A landmark both as the headquarters for the Hollywood Citizen newspaper and as movie location, the Palmer Building at 6362-6364 Hollywood Blvd. occupies an important place in Hollywood history.

Mary Mallory is the author of Hollywoodland and three other books. She also writes for the blog the LA Daily Mirror and serves on Hollywood Heritage's Board of Directors.  Photos courtesy John Bengston.