Although the pandemic is not over and the mask mandate for indoor public spaces has been reinstated, indoor movie theaters in Los Angeles County are allowed to operate. People can enjoy the shared experience of seeing a film on the big screen at the cinema. In addition, outdoor screenings are available as safe and fun alternatives to the theatrical experience.

Hollywood offers a solid assortment of summer movie events—as one would expect from the film capital of the world. The venues are differentiated from each other through the type of films shown, pricing, food options, and overall experience. Capacity is limited, so it is important to reserve a spot in advance. 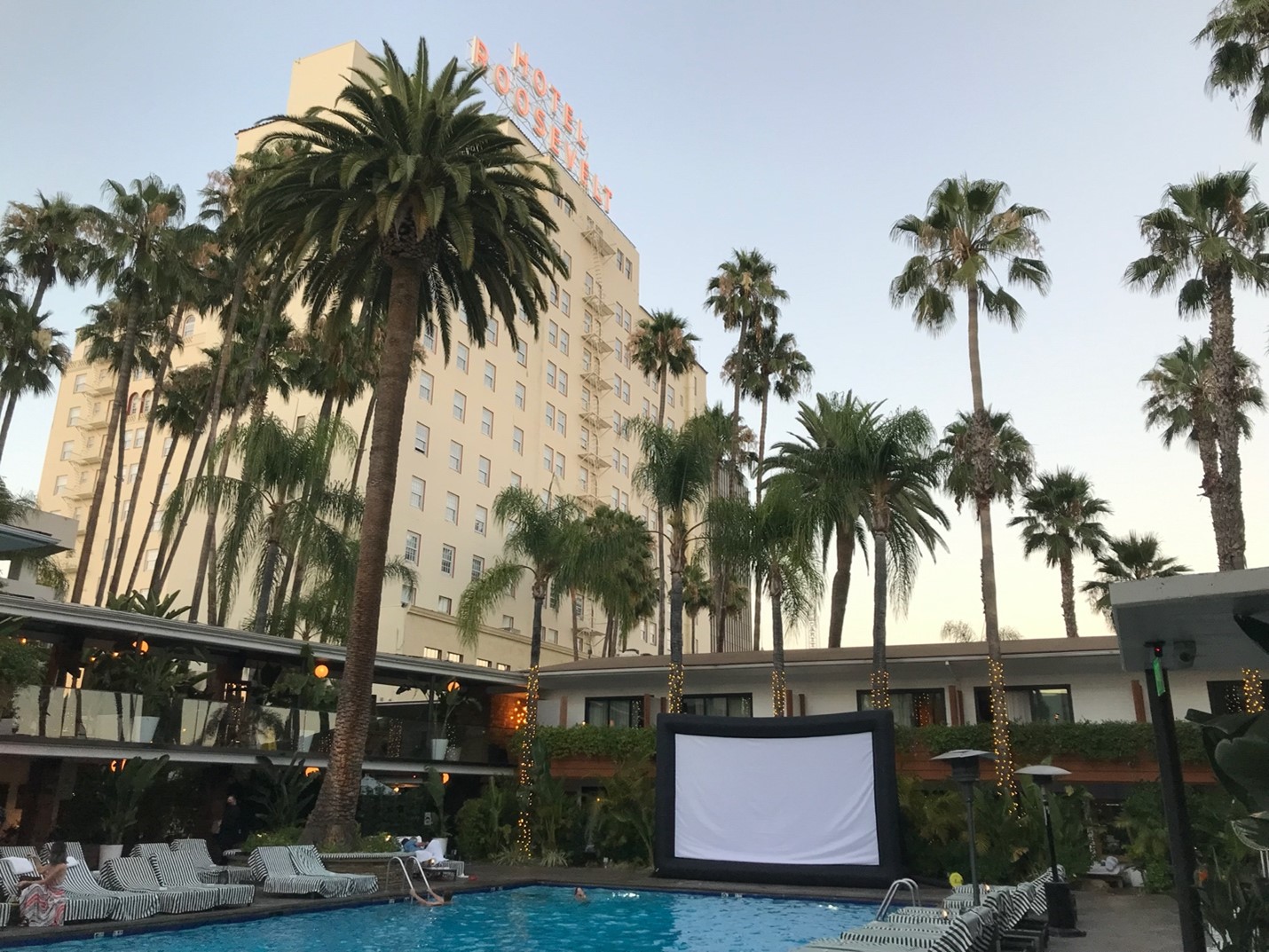 The Movie Nights at the Hollywood Roosevelt are at the Tropicana Pool. (Photo by Steven Herrera)

The famed Movie Nights at the Hollywood Roosevelt occur every Monday at the Tropicana Pool of the historic hotel at 7000 Hollywood Boulevard. Ticket holders can make their way to the pool from the building’s front entrance or the valet parking lot. The iconic Tropicana Pool features an underwater mural painted by David Hockney, and provides a unique screening experience under the neon sign of the hotel.

Each ticket includes complimentary popcorn. There is also a full bar and food menu available until 9:45pm each evening.

Guests are required to follow social distancing protocols and wear masks when not swimming or dining. Towels, blankets, and heaters are available on a first come, first served basis.

The price of admission starts at $16 for a front row seat for two people, and goes as high as $52 for VIP Dual Double Beds, which allows four people to comfortably view the screen from across the pool. Valet parking is available for $16.50 for three hours with validation from the Tropicana Bar, or $8 if pre-paid through Eventbrite. 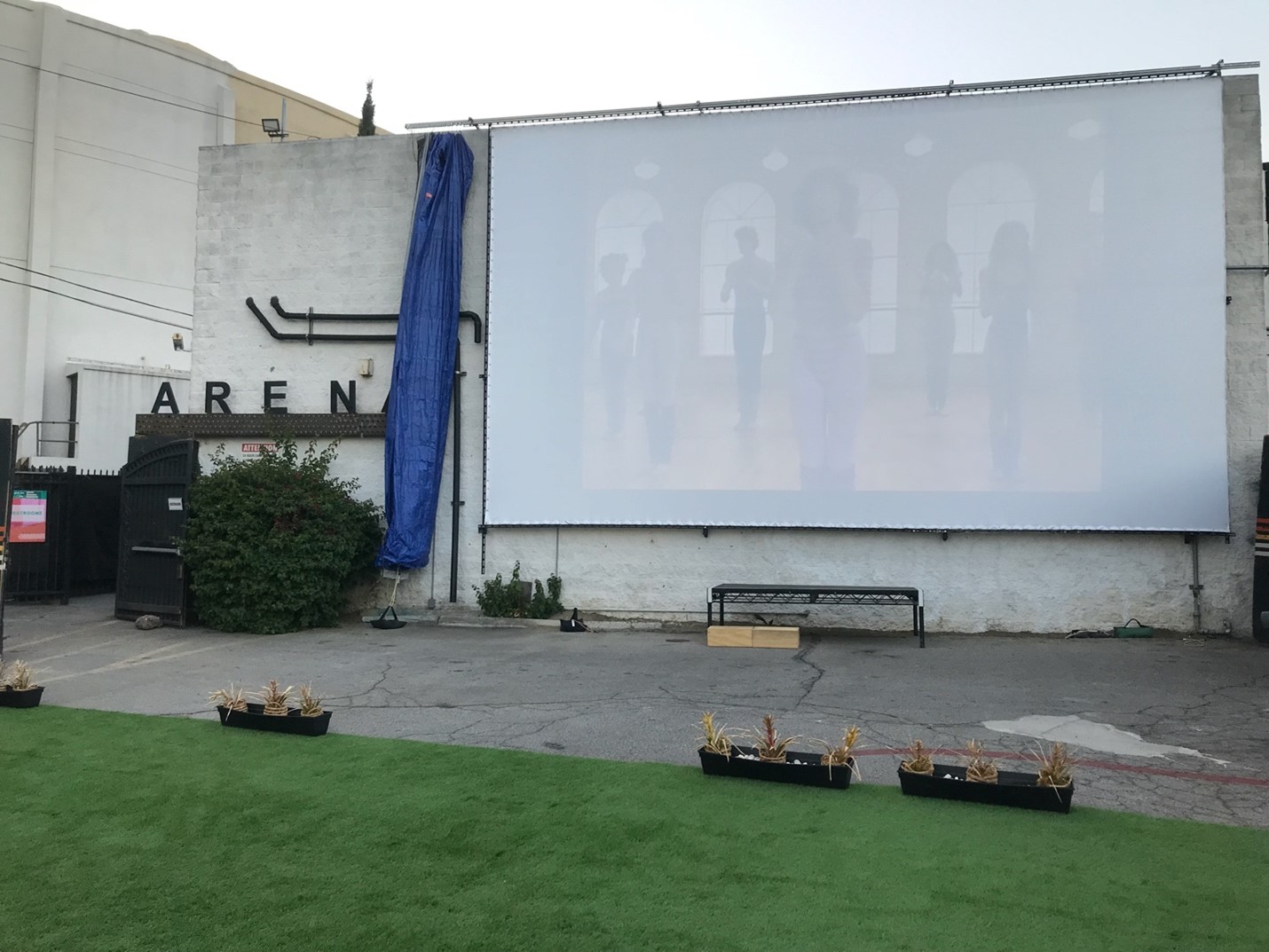 At Cinelounge Outdoors, the screen is on the south side of the building at 1625 North Las Palmas Avenue. (Photo by Steven Herrera)

Arena Cinelounge—a boutique art house cinema at 6464 Sunset Boulevard—has launched a seven-night-a-week outdoor theater in the parking lot behind the historic Egyptian Theatre. This parking lot was formerly used by the Cinelounge as a pop-up drive-in theater and now has lawn-chair seating for 200 people. Cinelounge Outdoors focuses on new independent films, many of them not shown on any other big screens in town.

Upcoming screenings include The Green Knight (2021), a fantasy based on a classic tale from the knights of the round table, Annette (2021), a drama about a stand-up comedian (Adam Driver) and his opera singer wife (Marion Cotillard), and Death Rider in the House of Vampires (2021), a horror western from writer-director Glenn Danzig.

Every Tuesday through the end of September, Cinelounge Outdoors screens Jane Fonda’s Workout (1982) for a unique exercise experience. The retro fitness class begins at 8:00pm, and guests are encouraged to bring their yoga mats. There are beverages available, as well as a popsicle cart.

There are ten gourmet blends of prepackaged popcorn available, all of which are non-GMO, vegan, and nut and preservative free.

The ticket price for a feature film screening is $20.00, while admission for Jane Fonda’s Workout is $15.00. Tickets and concessions are sold in advance only through the Cinelounge website. Parking is available directly across the street. No outside food or drinks are allowed.

Rooftop Movies at the Montalbán 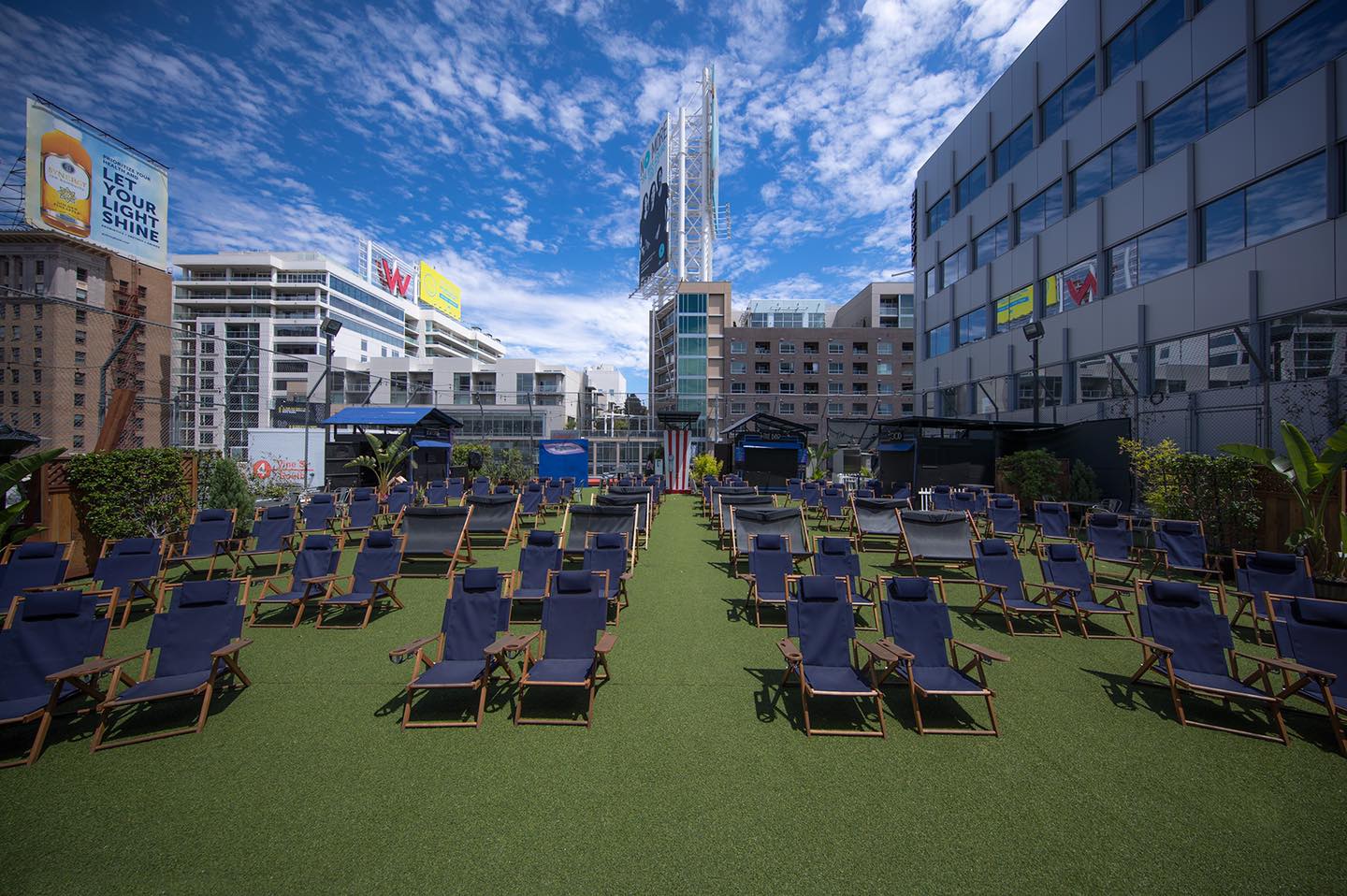 The Montalbán announced the long-awaited return of Rooftop Movies at The Montalbán, its annual summertime series that begins August 27, 2021, offering guests a cinematic experience under the stars—with Coronavirus safety precautions in place—at the historic Hollywood venue. The season kicks off with the 2013 comedy This Is the End on opening night, followed by Bohemian Rhapsody, Birdman, Weekend at Bernie’s, and Pulp Fiction rounding out the opening weekend.

Screenings will continue every weekend—with double features on Fridays and Saturdays—for the foreseeable future. The cinematic experience rolls right into Halloween-themed fun in October during Rooftop Screams!. The cost is $25.00 for regular admission and $50.00 for a loveseat (in limited supply), which includes two boxes of popcorn. Guests must order tickets in advance and can arrive at The Montalbán as early as 6:00 p.m. All attendees must wear a mask and be fully vaccinated against COVID-19. Located at 1615 Vine Street, Hollywood, CA 90028, the classic venue is near the legendary corner of Hollywood and Vine. For tickets and more information, please call the box office at 323-461-6999 or visit https://www.themontalban.com/rooftopmovies.

Dances With Films at the TCL Chinese 6 Theatres 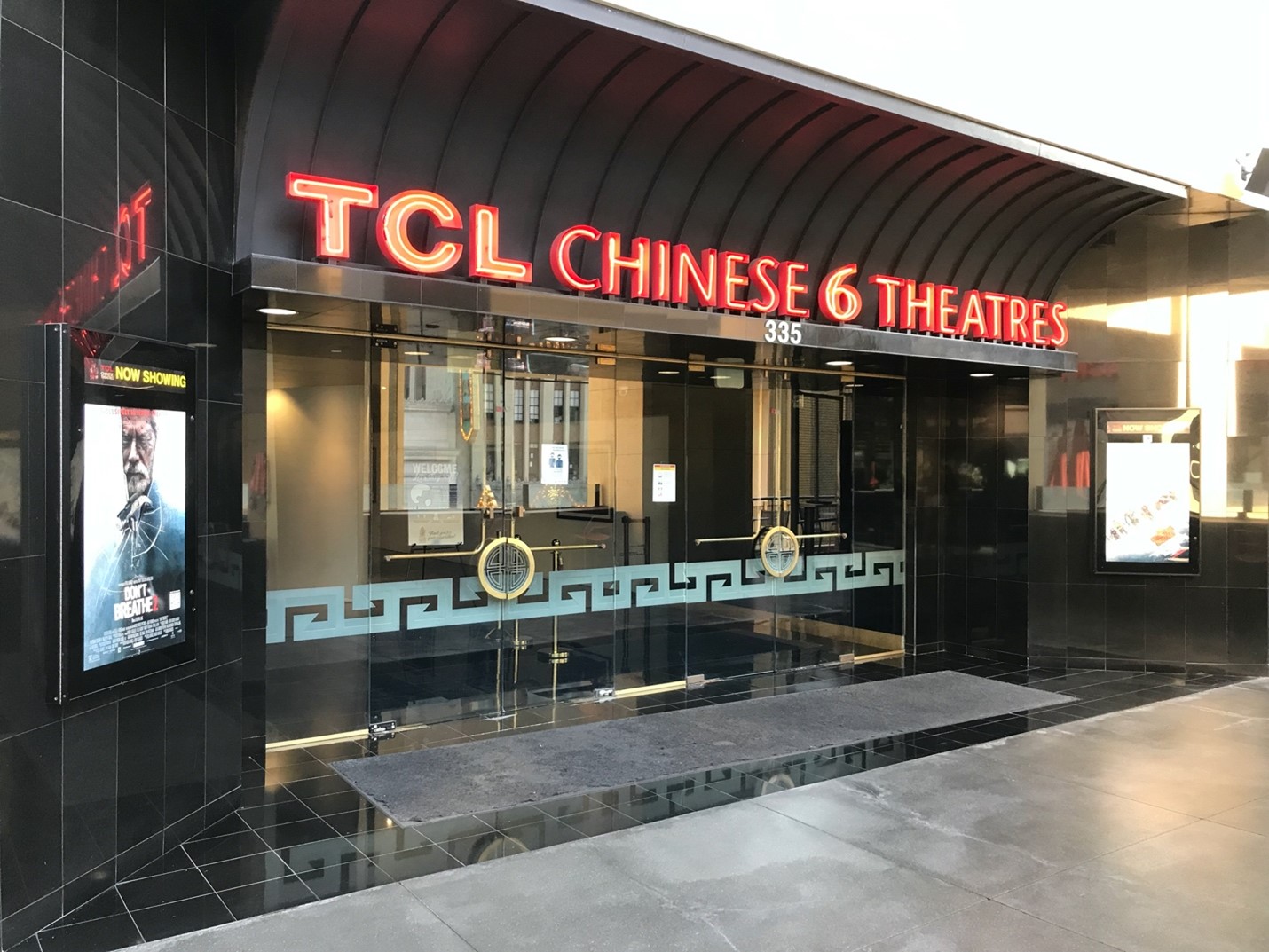 Dances With Films will be presented at the TCL Chinese 6 Theatres at Hollywood & Highland. (Photo by Steven Herrera)

Dances With Films is an annual Los Angeles-based independent film festival that includes both features and shorts. The event had to go virtual for 2020 because of the pandemic, but is returning bigger than ever this year. The 24th edition will run for three weeks, from August 26 to September 12, at the TCL Chinese 6 Theatres.

The lineup of more than 250 films will kick-off with the world premiere of Colin M. Day’s The Art of Protest. The 45-minute documentary includes interviews with Tom Morello, Dave Navarro, and others.

The closing night film is Mars Roberge’s Mister Sister, a comedy about a man who works as a master of ceremonies in the underground world of New York City drag.

The price of a ticket is $18 prior to August 26, and increases to $20 thereafter. Festival passes are $425 and grant access to all films and events. Tickets and passes are available on danceswithfilms.com. Parking is available at Hollywood & Highland for $3 for the first four hours, validated at the theatre, or $18 maximum for the day.

Note: The following option is outside of the Hollywood Entertainment District, but is included here because of its proximity to the district. 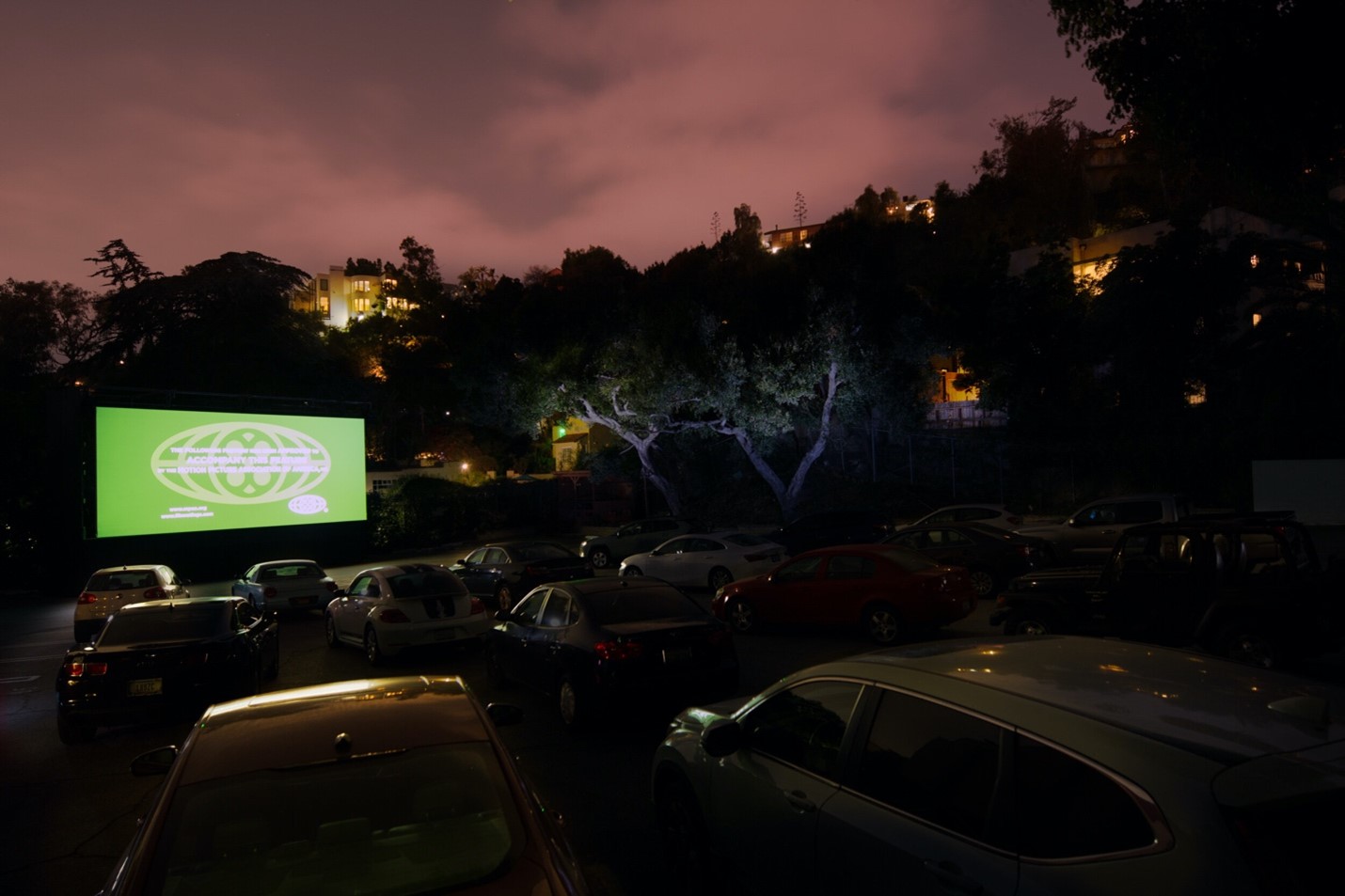 Although there are no shows currently scheduled, the Hollywood Legion Post 43 has both an indoor theater and a drive-in. The drive-in played first-run films—just like brick-and-mortar theaters. The drive-in was setup in the parking lot of the American Legion hall at 2035 North Highland Avenue. Screenings were offered seven days a week.

Back in February, screenings included a mix of new releases such as Nomadland (2021), and Hollywood classics such as Chinatown (1974).

The drive-in was equipped with a state-of-the-art 4K projection system, and was capable of screening 35mm film. FM radio was required for the audio.

The price of admission was $65, with a maximum of four guests per vehicle. The price included unlimited popcorn, one soda and one candy for each guest. Outside food and drinks were permitted, with the exception of alcohol. We expect the Hollywood Legion Theater to announce upcoming movies in the future, so stay tuned!