Surviving the Pandemic: How Hollywood Businesses Adapted and Persevered

Just about everyone can agree: the last 14 months have been a challenge for businesses. But resiliency was the keyword for these Hollywood businesses that worked hard to overcome difficulties and keep their doors open through most or all of the pandemic, in some cases transforming what they offered customers to stay open and keep going.

Offering delicious meat-free versions of fried chicken, tacos, burgers and more, Doomie’s Home Cookin’ and Next Mex, it’s south-of-the-border vegan option, have been mainstays in Hollywood since long before the pandemic. The beloved and lively vegan comfort food spots actually thrived during the pandemic, offering longer service on the weekend to make more earnable hours available for their employees, expanding the business as a result.

According to Chef Doomie “We actually increased our operating hours. We ended up running 24-hours on the weekend. We also added additional delivery vendors and improved the usability of our website. We’re absolutely keeping the extended hours,” he enthuses. He feels that while “Vegan is growing, I think the biggest draw was that everyone else closed. It certainly helped just to be open.”

With food available for delivery on a variety of online-apps, take-out, and with breakfast items such as “Steak and Eggs” (vegan style of course) and waffle with fried chicken breast available on the weekends, as well as serving what may be the best non-meat burgers in town, Doomie’s continues to “serve” the Hollywood community and beyond. 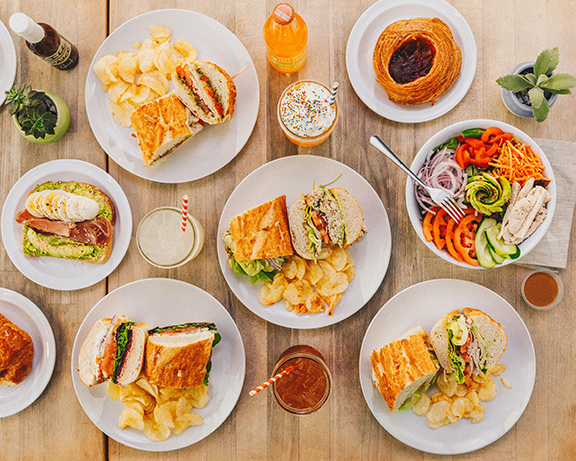 According to owner Joyce Abu Chaaya, Float Coffeeshop is poised for the Hollywood opening the shop couldn’t hold last year due to the pandemic. The business, which maintains another location in Pasadena, had planned a March 2020 opening, but because of the state-mandated lockdown, they were unable to open until May 25, 2020. The business responded to the pandemic and stayed afloat by limiting their menu and hours and making both curbside and delivery via apps such as Uber Eats available. “We were open just 10-4, rather than the longer hours we had initially planned, Abu Chaaya says. “Delivery and curbside definitely helped. We had to close again December, and have not yet reopened, but we are now working with the Hollywood Chamber to have a real opening ceremony in June or July. At that time, we’ll have a larger menu, with new items we don’t have in Pasadena, such as breakfast items. We’re also working on a beer and wine license,” she reports. “We’ll finally be able to have the kind of opening we’d anticipated pre-COVID.” 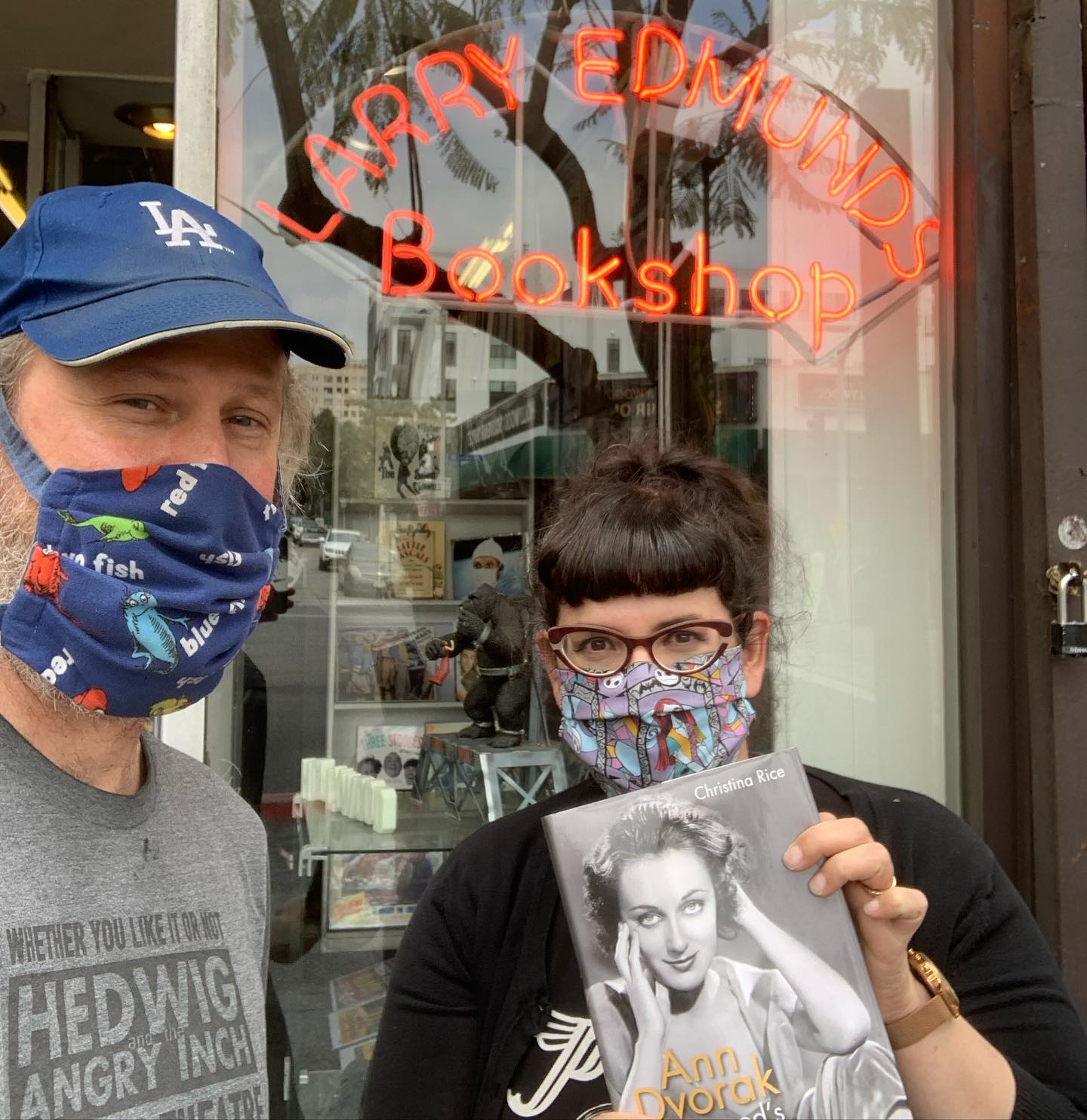 Always known for its eclectic selection of everything-film when it comes to books, and for in- person signings and events, the bookshop set off into new territory, building an online store and holding a crowdfunding campaign. Now, upcoming store talks and special events are scheduled online as with the upcoming May 9 celebration of store-owner Jeff Mantor’s 30 years with the store, featuring a talk with Peter Bodanovich. The director joins Mantor sharing his own memories of the store and discussing Bogdanovich's contributions as a director, storyteller, historian, and teacher of the history of cinema.

As Hollywood Boulevard’s “last bookstore,” it is also a vital resource for anyone who needs any information on the entertainment industry. The online store opens up shopping possibilities nationally and internationally; the GoFundMe was launched last April when businesses were shuttered due to COVID-19. The store’s fundraiser, still on-going, has helped the store survive and built its online shopping experience. Mantor said on the GoFundMe account “I continue to be humbled and proud of the messages, encouragement and of course, donations.” The business, which began in 1938, has been owned by Mantor since 2007. 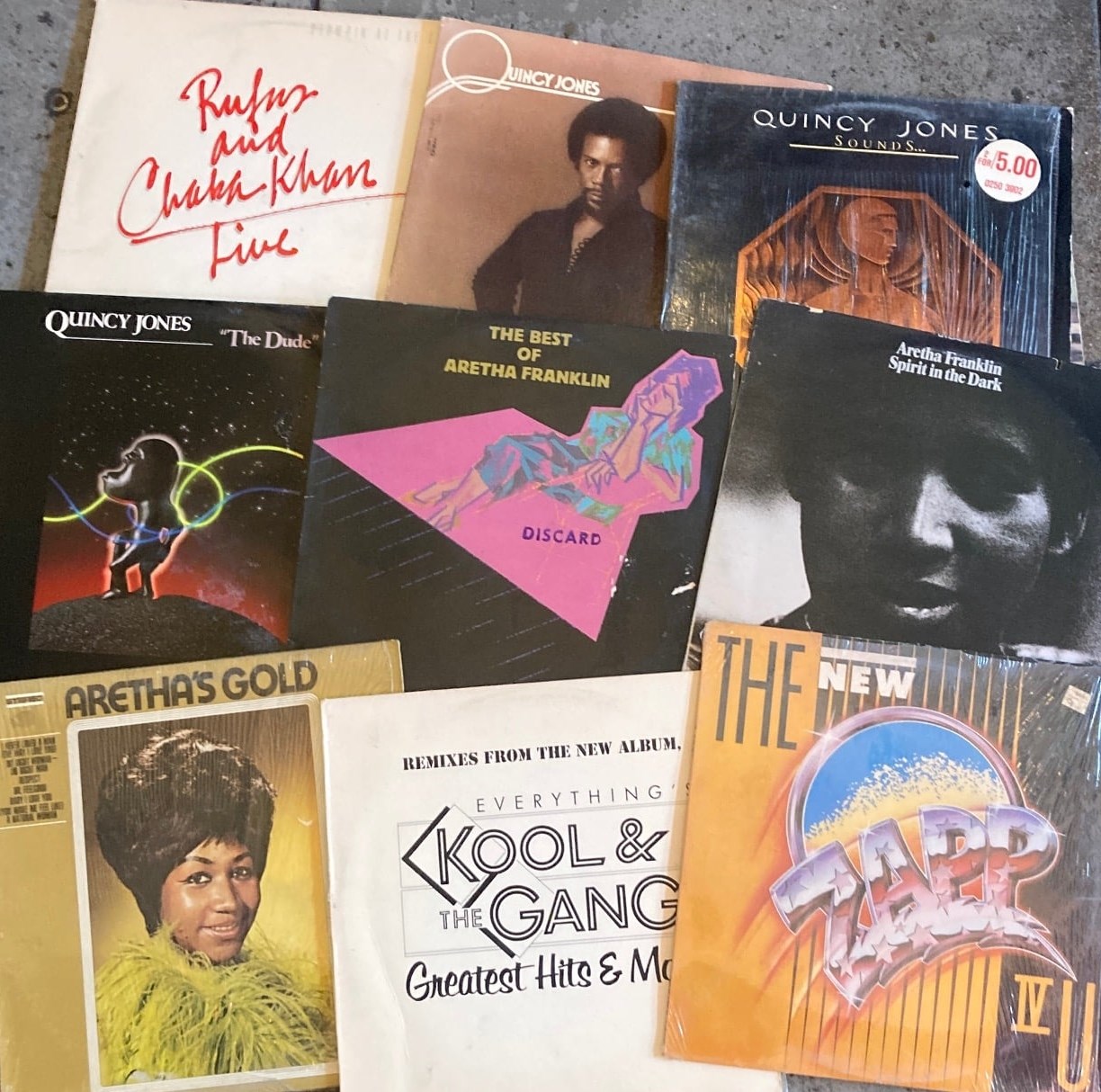 The Record Parlour made extensive use of social media to bring in customers during the pandemic. (Courtesy photo)

The Record Parlour offered customers the ability to enjoy good music despite the pandemic and remained open whenever allowed by the state throughout the pandemic. Co-owner Chadwick Hemus explains, “At first we shifted to our online store, and by April of 2020 we devised an online show on Instagram Live that we called Vinyl Happy Hour. We would play records we were selling and have a whole format of music and banter. Almost instantly we had online chatter and regulars.” He notes that along with the music, they offered “a lot of humor that really engaged people during times when people were really freaked out. We just had our one-year anniversary of that show, and we plan to continue.” The show runs daily from 4-6 p.m., with a “second round” on many days from 7-9 p.m. as well. “That really got us through. We did open as soon as we could, and we had outdoor record shopping, but that wasn’t a really big part of what got us through. We have always done the outdoor shopping experience.” But staying open so that shoppers could visit in person was important, he says. “Being able to shop even in a limited capacity, that helped us, too. People really needed somewhere to go.” Hemus says his business success was based on “the one-two punch of working on the Instagram thing and getting people’s eyes and ears on us while they were stuck at home, and then being open when we were able to open, when people wanted to get out of the house.” 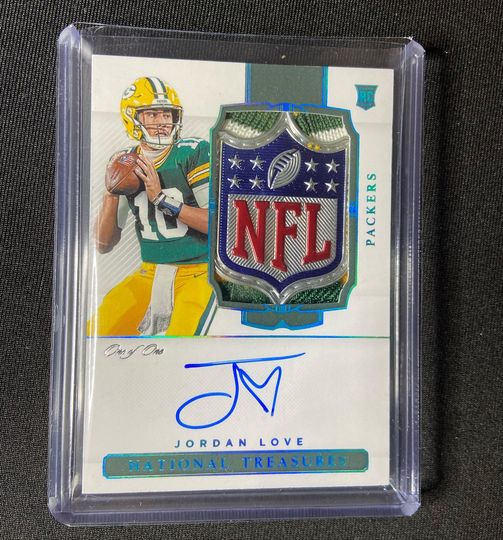 Cards and Coffee offered sports fans and collectors a treasure trove of options once they opened their doors during the pandemic. (Courtesy photo)

Opened during the pandemic, The Coffee Breakers gives sports fans of all types access to key memorabilia in the form of hobby packs and newly broken boxes. The company rips packs in their Hollywood location on their social media livestream and ships to customers everywhere. From hockey to NFL Draft, baseball, football, basketball, soccer and yes, UFC and NASCAR, too, this unique shop offers all kinds of sports fans great gifts and fun cards and collections, whether they’re novices or experienced collectors. Pokemon collectors are in for a treat, too. The brick-and-mortar store can be reached via text and goes by the moniker of Cards and Coffee. 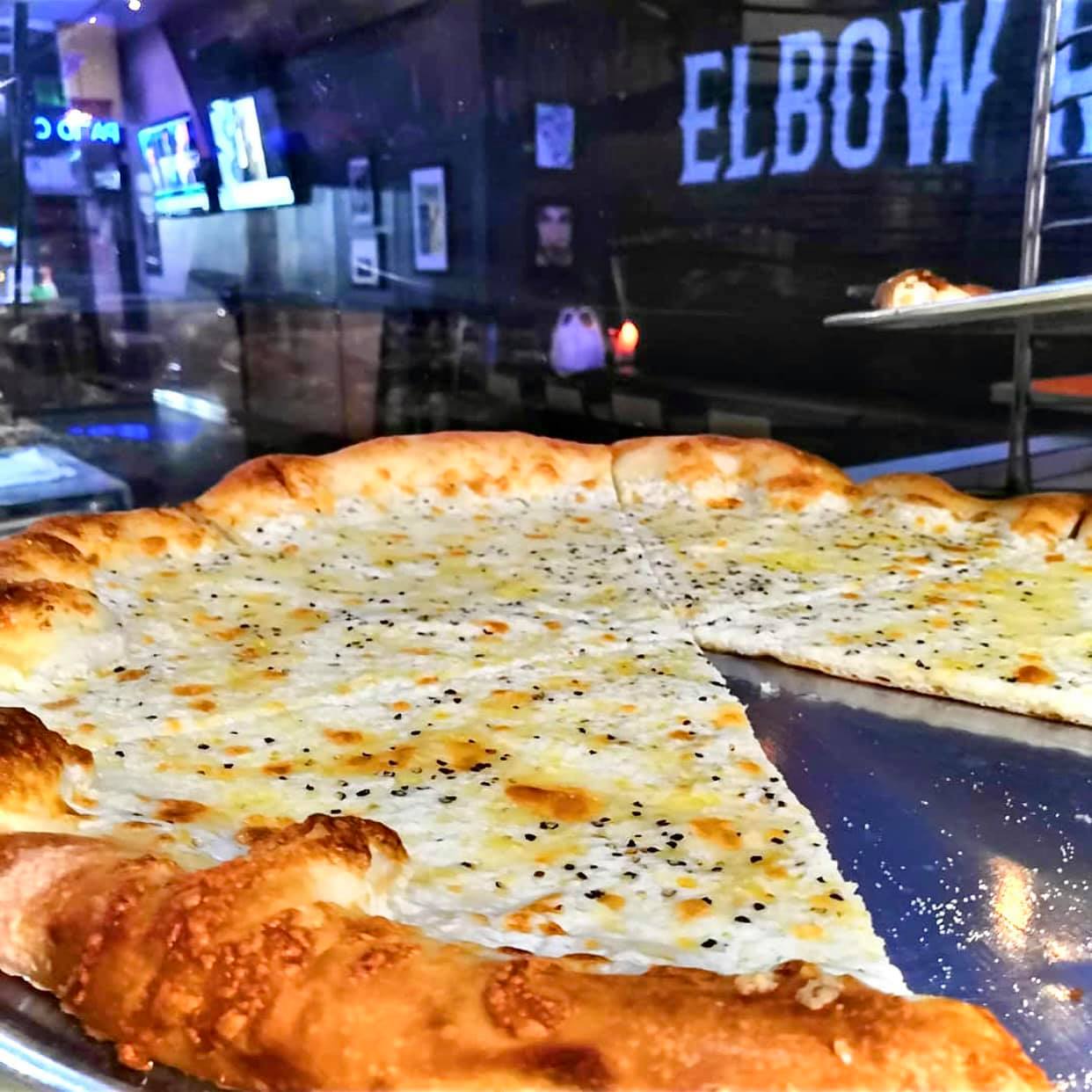 Elbow Room remained a local favorite due to the quality of their food and service. (Courtesy photo)

Long a neighborhood favorite as both bar and restaurant, Elbow Room was fortunately able to retain its beloved status even during the pandemic. Owner Lee Walker and staff provided both pick-up and delivery, the latter using a variety of online apps for ordering. The fine thin-crust pizzas on offer included a gluten free option; the quinoa veggie meat balls remained as tasty as they were before the pandemic. Wings, garlic fries, chopped salad, and paninis were all popular parts of the menu, but pizza, unsurprisingly remained supreme. And for a decadent pandemic finish, there was Peanut Butter Pie, a tempting combination of peanut butter cups, crushed peanuts, and peanut butter – all on an Oreo crust. On the beverage side, their frozen rosé – Frosé – is something of a Hollywood star.

The Elbow Room has described itself as a trendy take on Cheers with craft cocktails and beers, and that friendly and personable service helped keep business strong even during the pandemic. They were also early adapters to having a strong online-presence several years before COVID, which helped home-bound diners to order easily. When your online diners call you a “godsend,” you know you are doing something right. Customers praised pizza size, quality and fast delivery, which of course drew more customers. And once they were able to reopen, masks, frequent sanitizing, and customer temperature checks were all utilized to keep things safe. 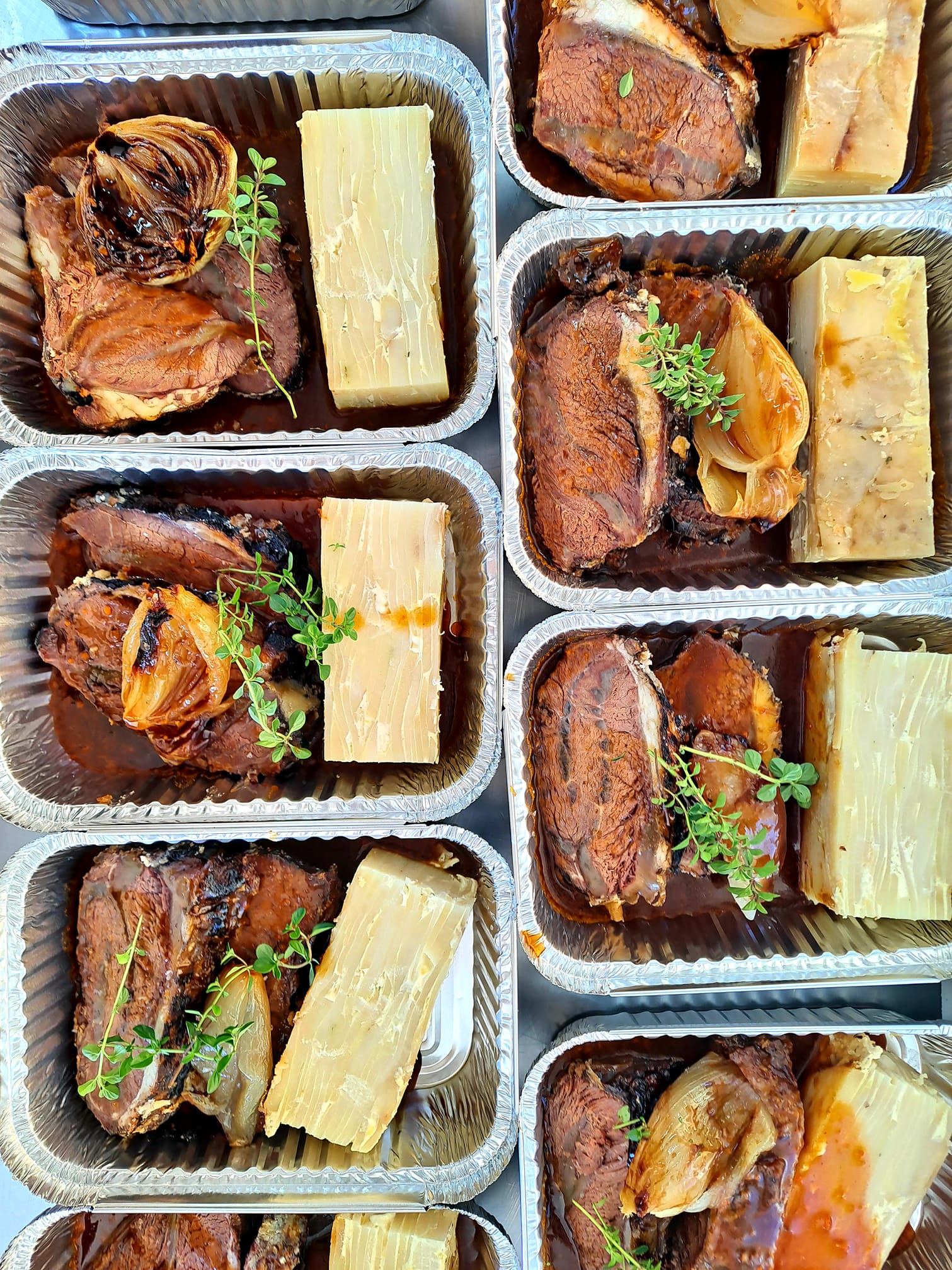 After opening as Supertoro, K2 Restaurants altered the concept to create a multi-brand food hall in their space on Cahuenga Blvd. (Courtesy photo)

Once known as Supertoro, this Hollywood dining spot transitioned to become Social Eats during the pandemic. According to owner John Kolaski, who owns several branches of his K2 dining concept, he responded to restaurant industry challenges by “incubating new concepts and streamlining operations under a single collaborative strategy…with the launch of our new SocialEats Good Eats.” Free, contact-less delivery for orders over $15 is available within 5 miles of the location involves the use of electric, zero-emission BMW i3 cars. Drive-through pick-up continues as a popular option. Orders from multiple restaurants owned by K2, such as Pop!s Burgers, StreetNoods, SuperToro, and STRFSH among others can be combined in one order.