Residents and tourists may notice a historic LADWP building just a short walk south of the Hollywood & Highland shopping center. The beautiful art deco building at 6776 Hawthorn Avenue towers over its neighbors and features an ornate façade with the words “Station Ten” above the gated front entrance. This is one of the many early power distribution stations hiding in plain sight throughout Los Angeles.

Hollywood was incorporated in 1903, but because of inadequate water supply, residents voted to merge with the City of Los Angeles in 1910. The Los Angeles Bureau of Power and Light was formed in 1911 to administer the electrical system that supplied power generated by private companies. In 1922, it purchased Southern California Edison’s distribution system within the city limits.

Distribution Station No. 10 was put into service by the Bureau of Power and Light on April 20, 1933. This facility served the west and central sections of Hollywood. The $400,000 project was a model of its type among distribution stations in the country. The building consisted of two stories and a basement. It was constructed of a structural steel frame—braced to withstand earthquakes—with reinforced concrete walls, floors, and roof.

Distribution Station No. 10 in 1933, the year it was put into service. Notice the sign at the top that reads “Municipal Power and Light.” (Photo courtesy of Water and Power Associates)

The new features inside the station included the first miniature type control and metering switchboard equipment, metal clad switchgear for the 4,600-volt bus, and two three-phase power transformers that were the highest in voltage of their type on the west coast. 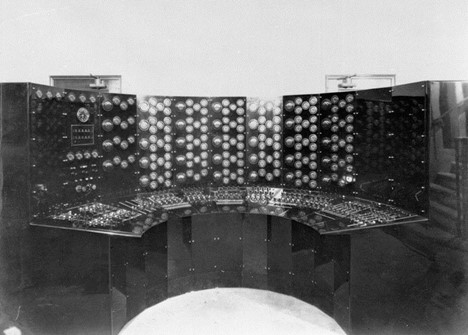 The control and metering board inside Distribution Station No. 10 in 1933. (Photo courtesy of Water and Power Associates)

All transmission lines and feeders entered and exited the station underground, eliminating the congestion of poles and lines often found in the vicinity of distribution stations. 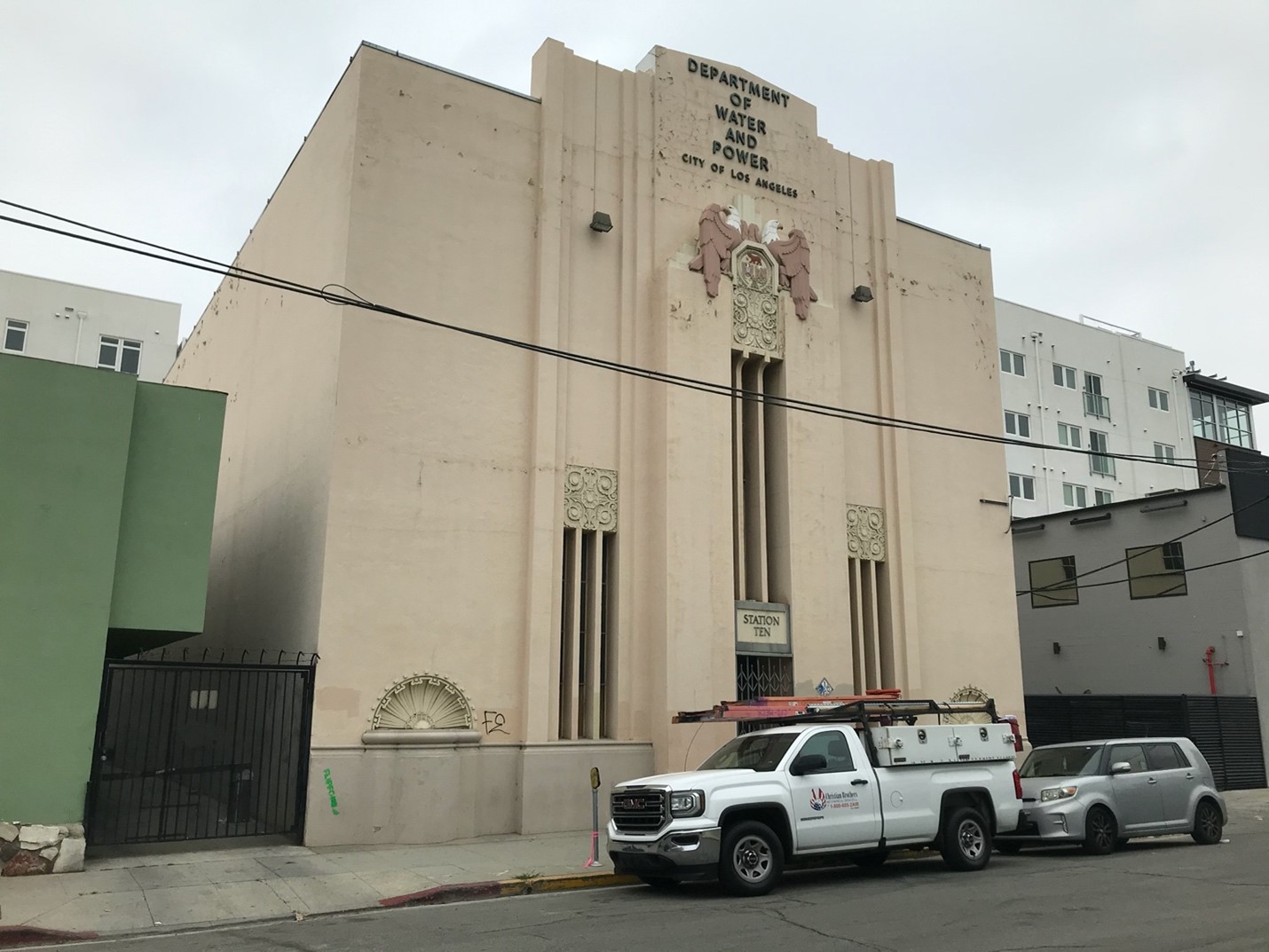 Distribution Station No. 10 is on Hawthorn Avenue between Highland Avenue and McCadden Place. (Photo by Steven Herrera.)

LADWP recently assisted the Hollywood Partnership with its ongoing efforts to revitalize the SkyTracker lights at the intersection of Hollywood Boulevard and Vine Street. The SkyTrackers were turned on nightly but have been dormant for more than a decade. The HP decided to invest in these lights and get them working again so that they can be used to light up the Hollywood sky.

In the early 1990s, the California Redevelopment Agency (CRA) installed four SkyTracker promotional searchlights—one on each corner of the intersection—as part of a beautification project for Hollywood. Designed by artist Tom Ruzika, each light was perched atop a ten-foot-tall column made of metal and marble. 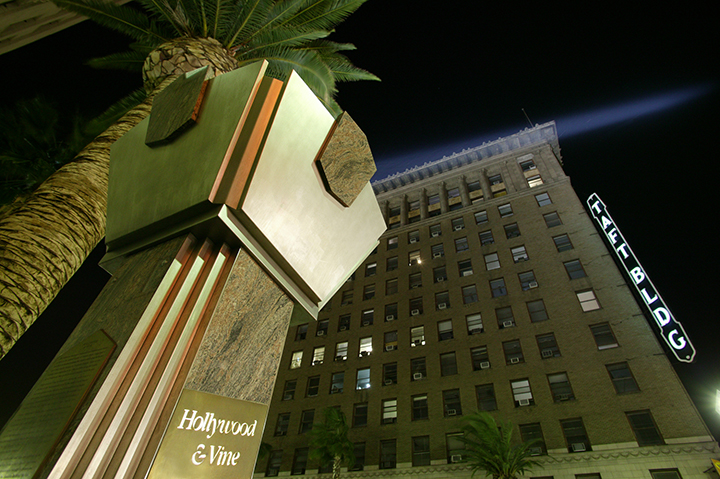 The SkyTrackers in their heyday, circa 2004, projecting light high into the sky above the intersection of Hollywood & Vine. (Photo by Kayte Deioma)

After the CRA was dissolved nine years ago, the SkyTrackers became ownerless city property. The HP adopted the SkyTrackers and worked with various city entities to get approval for the revitalization of these lighting devices. The entities included the Department of Public Works, the City Council 13th District, Bureau of Street Lighting, and the Department of Water and Power.

Kevin James, who was president of the Board of Public Works at the time, helped the HP initiate the effort to revitalize the SkyTrackers. Obtaining sign off from the Office of Councilmember Mitch O’Farrell was straightforward. But the HP needed assistance from the LADWP to determine the next steps for the project.

The HP started working with the LADWP in the summer of 2020. Rich Sarian, Place Enhancement Manager for the HP, has been overseeing the effort to revitalize the SkyTrackers. A locksmith was hired to open the SkyTrackers, while the LADWP team identified the circuits and the electrical wiring outlay underground. Since the wiring is intact, the SkyTrackers can be reactivated once the LADWP installs electrical meters. This will happen concurrently with the installation of new lighting technology.

The projected beams of light will criss-cross above the famous intersection. Not only will the beams add excitement to the neighborhood, they will serve to attract visitors. “We hope people will see the lights, be drawn into Hollywood, and stay for the excitement,” said Mr. Sarian. The HP will operate the lights for a few hours nightly, every night of the year.

Searchlights hearken to Old Hollywood as they were used to create spectacle for movie premieres and the Academy Awards ceremonies.

Although there are no plans yet, there will be an unveiling ceremony for the new SkyTrackers. 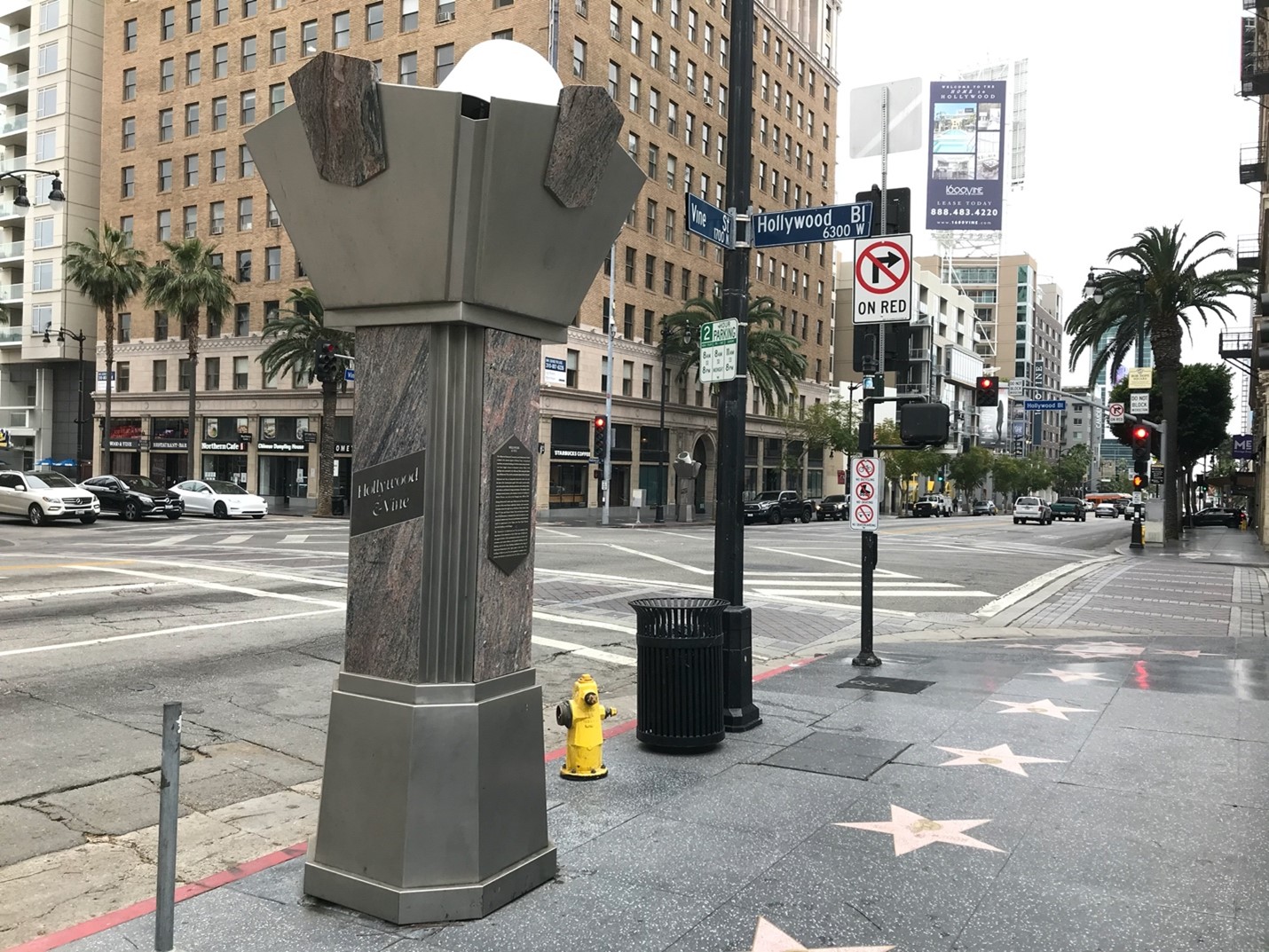 Each SkyTracker light is perched atop a ten-foot-tall column made of metal and marble. (Photo by Steven Herrera)

This revitalization project has taken some time and involved many stakeholders. But the effort will be worth it as the SkyTrackers will celebrate the reopening of Hollywood after months of pandemic-related business shutdowns, lost tourism, and reduced foot traffic. The promotional searchlights will give the community a renewed sense of pride, attract visitors, and help reinvigorate the neighborhood.